More Awardees in Round 10 for Reauthorized NMTC Program 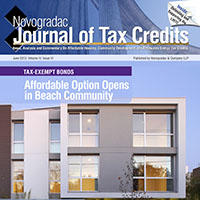 The Community Development Financial Institutions (CDFI) Fund in April awarded $3.5 billion in new markets tax credit (NMTC) authority to 85 community development entities (CDEs) in the program’s tenth allocation round. The NMTC had been allowed to expire in 2011 but was one of the key tax credit provisions reauthorized by Congress last January under H.R. 8, the American Taxpayer Relief Act of 2012. Legislators extended the NMTC program for two years and provided a maximum annual amount of qualified equity investments of $3.5 billion each year. The CDFI Fund opened the application process for the tenth round in July 2012 despite the program not being reauthorized until about six months later.

“We wanted to make the awards available as quickly as possible, and there was no merit in postponing the round until we got certainty [of reauthorization],” said Bob Ibanez, New Markets Tax Credit program manager at the CDFI Fund.

The 85 CDEs, headquartered in 28 states and the District of Columbia, were selected from a pool of 282 applicants requesting more than $21.9 billion in credit authority. The high demand for NMTCs compared to the amount of allocation authority available, coupled with a long list of highly qualified applicants, prompted the CDFI Fund to award allocations to a greater number of CDEs in this round than the 70 organizations awarded last year — even though it resulted in smaller individual awards. Round 10 allocations range in size from $15 million to $80 million, with an average allocation amount of $41.2 million compared to $51.8 million in round nine.

“For the 2012 round, we made a conscious decision to go further down the list of highly qualified applicants. We tried to strike a balance between a lower average award size than the historical $50 million, and making sure a CDE would still be able to do some of what it proposed in its applications with [its] award,” said Ibanez.

To date, the CDFI Fund has made 749 awards, totaling $36.5 billion in tax credit allocation authority. The CDFI Fund reports that every $1 in NMTC leverages another $8 in private investment, with a majority of investments made in distressed areas.

“In fact, over 70 percent of new markets tax credit investments have been made in communities that meet the highest distress criteria, above even the program’s requirements,” said CDFI Fund director Donna J. Gambrell. “That result effectively demonstrates how essential the new markets tax credit program is to spurring economic development in underserved areas.”

Increased Rural Investments
The CDFI Fund’s 2012 notice of allocation authority sought to ensure that at least 20 percent of investments under this round would go to non-metropolitan areas. Based on initial estimates provided by allocatees, round 10 will see decreased investment in urban areas and increased investment in rural areas compared to previous rounds. Allocatees propose investing approximately 54.3 percent of round 10 NMTC authority in urban areas, which is the lowest percentage for urban developments projected since round six in 2008. Furthermore, 21.7 percent of all round 10 allocation credits are proposed to be invested in rural projects by allocatees — the highest percentage designated to rural investments since round six.

Montana Community Development Corporation (CDC) will be among the round 10 awardees focused on rural development. Dave Glaser, Montana CDC president, said the NMTC program has been instrumental in attracting both local and out-of-state investments in rural communities. “It’s hard to encourage investment in rural America because we’re outside of the financial mainstream. The new markets program for us is a great fit for our mission because it brings resources to rural, low-income communities,” said Glaser.

Montana CDC will use its $65 million award from this round to continue supporting rural operating businesses in Montana and Idaho. It will focus on healthcare for medically underserved and rural areas, downtown revitalization, renewable energy and reuse of abandoned buildings. Past NMTC projects include a 60,000-square-foot expansion of the Kootenai Medical Center in Coeur d’Alene, Idaho, funded by part of Montana CDC’s $60 million round nine allocation.

Healthy Initiatives
Several other CDEs will focus on community health initiatives. Ohio-based Finance Fund plans to invest its $40 million award from this round in health care, healthy foods and education in rural and urban Ohio. “In Ohio, we saw nearly 500,000 patients in our community health centers in 2011. Seventy-five percent of those are uninsured or on Medicaid,” said Finance Fund CEO James R. Klein. He said Finance Fund has a pipeline of potential health center developments and that a competitive vetting process will help determine which projects will be the most impactful.

Nonprofit CDE and CDFI NCB Capital Impact, which received a $40 million award this round, will also invest in two community health centers, said Scott Sporte, chief lending officer for NCB Capital Impact. He said nonprofit community health centers benefit greatly from the NMTC program. “It’s an important subsidy for nonprofit borrowers. It allows them to do more aggressive transactions,” he said. Other proposed deals that NCB Capital will consider include a grocery store in Los Angeles and a charter school in the Midwest.

Comprehensive Development
Many awardees will use their recent awards to build upon the success of past investments or projects that fit into larger community development plans.

“We’re going to place an emphasis on integrated, holistic approaches to neighborhood development,” said Judi Kende, Low Income Investment Fund’s (LIIF’s) senior vice president of eastern and central regions. Kende said LIIF has a strong pipeline of deals for its $55 million round 10 award, including a neighborhood transit hub where LIIF hopes to develop a supermarket, federally qualified healthcare center and a center for educational services.

“We can layer the new markets [tax] credits in the same areas to create total community development,” said DiPietro. She said an example of Enterprise’s past developments is Miller’s Court, a $21 million housing community in Baltimore affordable for first-year teachers that also features retail space and office space for education-related nonprofits. Enterprise financed a second property for teachers at Oxford Mills in Philadelphia and DiPietro said Enterprise plans to use some of its round 10 authority for similar projects.

CityWide has removed blighted housing in low-income neighborhoods. Part of its $20 million NMTC allocation from this round will concentrate on furthering economic development in those areas, explained CityWide president Steve Budd. “We take the comprehensive approach to redevelopment and try to leverage as many partners and community development resources as we can,” said Budd. Potential deals in CityWide’s pipeline include a new health clinic for youth in a low-income neighborhood and a facility for a nonprofit company that focuses on job placement for the disabled.

Program Support
Program supporters say that continued demand for NMTCs and a successful track record of the program merit increased federal support. “One of the ways we can make the program better is to increase the amount of resources for the program,” said Klein. “This program needs to become part of our DNA now.”

Ibanez agreed. “Over the past decade, the new markets tax credit has become a well-established tool for investing in or financing operating businesses and real estate development projects benefitting low-income persons and communities. Demand has never wavered, regardless of the nation’s economic condition,” said the CDFI Fund’s NMTC manager.

In its proposed budget for fiscal year 2014, the Obama administration proposed permanently authorizing the NMTC at $5 billion of allocation authority per year.

2013 Round
Ibanez reports that no significant changes are planned for the 2013 round application and the CDFI Fund plans to open the award round no later than July.

More details about the 2013 NMTC allocation round are available at www.newmarketscredits.com.