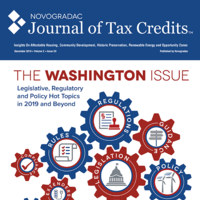 Another affordable rental housing funding crisis is brewing–a crisis in the supply of private activity bonds (PABs). The crisis is one of demand, as well as one of choices.

For many years, the demand for PAB cap has been less the supply. In fact, the national carryforward amount–the unused cap from the previous three years–has been at least $32 billion each year since 2008. That landscape is rapidly changing, already forcing some states to make difficult decisions. Other states will likely face similar challenges in coming years unless there’s a change in the way bonds are allocated, issued or used.

PABs are a big part of the answer to the affordable rental housing crisis, but are subject to the annual state volume cap, in competition with 13 other purposes. Those other purposes include homeownership, mass commuting facilities, funding and refinancing student loans, redevelopment of designated blighted areas, water and sewage treatment facilities, hazardous waste facilities, and a few others.

The volume cap for each state is based on a formula involving its population, which for 2020 will be the greater of $105 multiplied by the state population or $321,775,000. The formula is recalculated annually for inflation and changes in population.

The vast majority of PAB use nationally is for housing: According to the most recent annual report on bond use by the Council of Development Finance Agencies (CDFA), 30.4 percent of PABs in 2018 went to homebuyers and 61.1 percent went to multifamily rental housing, meaning 91.5 percent of PABs went to housing. 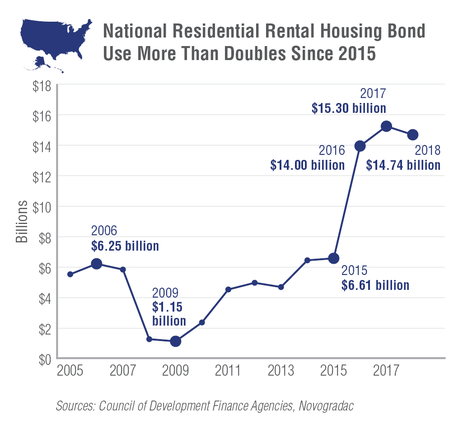 There are, of course, arguments to be made for other uses of PABs beyond housing. Water and sewage facilities, hazardous waste facilities, utility facilities and other uses are crucial to the success of a state. However, at a time when the nation faces an affordable housing crunch (the National Low-Income Housing Coalition estimates that there are only 37 affordable and available homes for every 100 extremely low-income residents in the nation), PABs are a valuable tool for housing.

A review on a state-by-state basis reveals a starkly different picture: states bumping up against their cap.

During the 2016-2018 period, more than 75 percent of the $44 billion in multifamily bonds were issued in only 11 states, with each of those states issuing more than $1 billion in bonds. Of those 11, one (Massachusetts) had no carryforward into 2019 and eight had significantly less carryforward than three years earlier, when multifamily bond issuance spiked. Those eight states are California, Colorado, Florida, Georgia, Illinois, Minnesota, New York and Washington.

Ohio and Texas are the two states that did not see a notable decline in their bond cap carryforward in spite of issuances of more than $1 billion in residential rental PABs in 2016-2018.

As states run out of carryforward, greater pressure is placed on choosing how PABs are used.

The aforementioned nine states that are at or near their cap will soon face more difficult choices for PAB use–and they’re not alone. The District of Columbia and New Mexico each issued more residential rental PABs than their annual bond cap in 2018, while three other states–Hawaii, Nevada and Utah–saw notable declines in carryforward while using much of their cap for residential rental.

The decreasing amount of carryforward is widespread: 60 percent of states that reported had less carryforward in 2018 than they did in 2013.

Even some states that traditionally don’t allocate a high percentage of their bond cap to residential rental–Connecticut and Tennessee, for instance–face a looming cap crunch. Those states will also have difficult decisions to make as various PAB uses compete for a more limited resource.

Of all the states, California allocates the most dollar volume to residential rental housing, $4.00 billion in 2018. Granting large amounts of PABs to multifamily rental housing is easy when there is plenty of cap. The California Debt Limit Allocation Committee (CDLAC), which governs PAB issuance in the state, hasn’t faced competition for bonds in recent history, going back at least 15 years.

A look at 2019 reveals the burgeoning crisis.

The cap for 2020 is expected to be around $4.2 billion–less than 75 percent of the cap two years earlier.

This all comes after California affordable housing advocates celebrated a big win, when the state Legislature approved a boost of $500 million in state low-income housing tax credits (LIHTCs) for properties that receive federal 4 percent LIHTCs, which are paired PABs. Other state housing programs also got budget boosts. 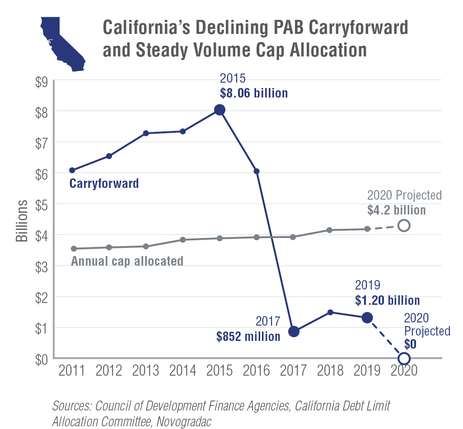 Bottom line? The California Housing Partnership (CHP) estimates that the state would need about $6.5 billion in bonds in 2020 to simply match what the state’s housing agencies and the LIHTC allocation would require. That’s significantly more than the cap–and CHP says the estimate is likely on the low end and total demand is likely higher.

For instance, CDLAC allocated $300 million in PABs in October to a high-speed passenger rail line from Victorville, Calif., to Las Vegas and will likely be asked to make another $300 commitment in 2020. There is also concern among affordable housing advocates in California that bonds will be allocated for other uses, such as desalinization plants (a potential $1.25 billion ask).

PAB competition has arrived in California.

The argument for using bonds to build multifamily affordable housing is a logical one. When a bond is paired with 4 percent federal LIHTCs, it brings in much more equity than the bond itself:  bonds used in affordable housing provide more bang for the buck. One estimate is that for every $100 in bond use in an affordable multifamily rental property, there is a federal subsidy of $51. That benefit isn’t available for any other use of the PABs.

Many affordable housing advocates are suggesting states adopt one or more of the following options to help preserve or expand PAB funding for housing.

Adopt a Housing First strategy.  States can strategically decide that their PAB cap will first go to housing, generally, or even multifamily residential rental property, specifically. States could also establish or raise the minimum percentage of their cap that is used for residential rental housing. In California, for instance, at least 80 percent of the PAB issuance has gone to multifamily residential in every year since 2013.

Stretch the dollars. Federal law requires that at least 50 percent of land and building costs be financed by PABs to gain the maximum LIHTC award. States could set a maximum amount that PABs will cover–perhaps 52 percent–which would have the effect of spreading bonds around to more developments.

At the national level, there are steps that Congress could take.

Increase the bond cap. The formula to determine bond issuance isn’t sacred. An increase in cap, even a $5 or $10 per-capita boost, would allow some room for states that are pushing up against their cap.

More flexible recycling. PABs issued for rental housing trigger the eligibility to receive LIHTCs. Congress could allow PABs that initially fund rental housing to be recycled into other PAB uses. Such a law would mean more PAB authority could be used to generate tax credit funding, while eventually allowing the PABs to be recycled into other non-rental housing purposes. Just such a provision is in the Affordable Housing Credit Improvement Act.  That provision could be expanded to allow recycled proceeds to fund non-housing purposes, such as high-speed passenger rail or desalinization plants.

Decreased percentage. The aforementioned requirement that at least half of land and building costs are financed by PABs could be lowered by statute. Dropping the requisite percentage–perhaps to 40 percent or 33 percent–would allow the same amount of PABs to finance more affordable rental housing.

Create a national pool. A national pool of unused cap, similar to what happens with the LIHTC, could be created.  A national pool would allow states that reach their cap to be awarded otherwise-expiring PAB authority from states unable to use their full allocation.

The PAB squeeze already felt keenly by a handful of states is spreading, which ultimately will force difficult choices by states as to how they spend their bond cap.

The brewing crisis of PAB supply needs to be addressed, at both the state and federal levels, whether by changing state policies, increasing the cap, sharing the unused cap space, increasing the percentage going to affordable housing, increasing flexibility in recycling, changing the requirements for PABs used with 4 percent LIHTCs or something else.

Without immediate action, this crunch is going to get worse and more widespread.