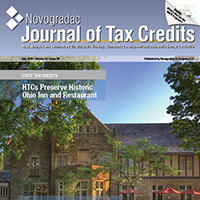 A single low-income housing tax credit (LIHTC) allocation will often be awarded to a development that consists of more than one physical building. Each building will receive its own Internal Revenue Service (IRS) Form 8609. Unless otherwise elected on IRS Form 8609 by the taxpayer, each building in an LIHTC development will be treated as its own development/entity.

Line 8b of IRS Form 8609 reads as follows: “Are you treating this building as part of a multiple building development for purposes of section 42?” A taxpayer can choose to group buildings that are within the same LIHTC allocation into one development or divide them into separate developments, by selecting “Yes” on line 8b and including a statement that identifies which buildings should be included as part of a multiple building development. It is important to review what this election means and how it affects the operation of an LIHTC development.

Multiple Building Developments
A LIHTC development that has multiple buildings can be divided in the following ways:

Answering “No” on Line 8b
Answering “no” on line 8b of Form 8609 means that even though two buildings have the same LIHTC allocation they are viewed by the IRS as being two separate developments.

Answering “Yes” in Line 8b
Answering “yes” on line 8b of Form 8609 means that buildings in a development that are identified as a group in the 8b statement (attached to the Form 8609 in the one-time IRS filing) should be treated as one, multiple building development for the purposes of LIHTC compliance.

Please note that two or more qualified buildings may be included in a multiple building development only if they are:

LIHTC Compliance and Calculation Issues
There are a number of issues to consider. Some of the bigger issues include meeting the minimum set-aside, dealing with tenant transfers, and calculating income limits.

Is the 8b Election Irrevocable?
The short answer is that the election is not irrevocable, but it is difficult to change the election once made. The election is made when the IRS Forms 8609 are filed with the IRS’ Philadelphia office. The IRS had previously issued a series of private letter rulings that allowed taxpayers to change their answer from “no” to “yes” on line 8b.

Conclusion
It is important when operating an LIHTC development that owners and managers understand the ramifications of line 8b on IRS Form 8609. Property managers and asset managers need to understand how line 8b was answered, and the development team needs to plan ahead and discuss how to best answer line 8b.