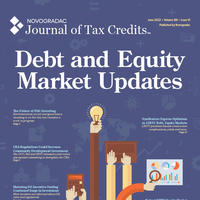 A dozen years after announcing their intention to modernize Community Reinvestment Act (CRA) regulations, three federal agencies–the Office of the Comptroller of the Currency (OCC), Board of Governors of the Federal Reserve (Fed) and Federal Deposit Insurance Corporation (FDIC)–issued a joint notice of proposed rulemaking May 5 to strengthen and modernize the CRA.

The new proposal aims to make CRA regulations more transparent and objective. It also addresses a significant change in how banking works, as online services have made physical bank addresses less dominant. The proposed rules come after discussion that began in 2010 when the agencies announced their intention to revise the CRA regulations and included a 2020 rule by the OCC that was later withdrawn.

Buzz Roberts, president and CEO of the National Association of Affordable Housing Lenders and a leader in the campaign for CRA reform, said the proposed rule would be a significant improvement.

“Particularly for community development, this proposal provides greater clarity, flexibility and weight for activities such as low-income housing tax credit [LIHTC] and new markets tax credit [NMTC] developments,” said Roberts. He said that banks and communities will benefit from increased clarity, consistency, predictability and transparency with CRA regulations, as well as more flexibility with geography.

Roberts highlighted the importance of the CRA, which was introduced in 1977 to encourage banks to increase involvement in lower-income communities and businesses where the banks do business.

If adopted, the updated rules would be the first significant interagency revision to the CRA since 1995.

The retail test would be made up of 45% lending and 15% products, creating 60% of the total score. The remaining 40% would be a community development test, made up of 30% financing (either lending or investment) and 10% services.

There is a proposed shift to a numerical metric, but not at the pace of the 2020 proposed OCC rule. The new proposed rule includes an implementation timeline in which there would continue to be qualitative evaluations while data is collected, with a transition to a numerical metric with specific benchmarks.

“Banks would get credit for LIHTC or NMTC activities anywhere in the country, which is a huge plus,” he said. “We’ve seen a tremendous disparity between the so-called CRA hot spots and deserts and that should diminish substantially.”

Roberts also said the proposal would grant full credit to all LIHTC financing–including debt. That’s true even if less than half the units in a financed property are tax credit units.

Roberts said the proposal includes provisions for CRA credit for factors often present in community development properties: Such things as being in persistent poverty counties, high-poverty census tracts, and high-opportunity areas, as well as building developments for low-income people, as distinguished from those with moderate incomes.

“Not every tax credit deal will meet those standards, but they are a big plus,” Roberts said. “If you put all those things together, banks will be able to get more CRA consideration for more LIHTC and NMTC deals, so it will increase the competition. LIHTC project debt will unequivocally count. There’s been confusion about that.”

Roberts said the eligibility of historic tax credit and opportunity zone (OZ) investments for CRA credit will be more situational.

“If historic or OZ deals contribute to low- or moderate-income (LMI) community revitalization–without displacement–or serve an LMI clientele, they will get CRA consideration,” Roberts said. “Of course, not all historic or OZ deals do that. You’ve got to look at the content of the deal.”

While the neighborhood homes tax credit (NHTC) is not enacted, the CRA proposal would affect how banks would receive positive consideration for NHTC-related investments and loans, if it were to be enacted. NHTC financing targeted to low- and moderate-income homebuyers and homeowners (those earning no more than 80% of the area median income) would be eligible for positive CRA consideration, but eligibility for homes located in distressed communities is less clear.

The fact that the proposal for the new regulations was made jointly by the Fed, FDIC and OCC is important.

“It’s a big deal,” Roberts said. “It’s funny how these expectations get set–until the OCC went off on its own, it had been normal for the three agencies to do CRA regulations jointly.”

Roberts highlighted some variation from that tradition in the early 2000s, but said that for most of the CRA regulations’ 45-year history, rules have been made jointly.

“It’s critically important that you have a consistent policy for all the agencies,” Roberts said. “Think of it from the perspective of a developer: You want to approach a bank for financing, but the notion that that bank’s CRA obligations varies according to who its prudential supervisory agency would be complicated and confusing.

Roberts said community development stakeholders should weigh in on the proposal before the comment period ends Aug. 5. He said he expects the three agencies to work on finalizing the rule by the end of 2022.

“That’s a tall order because interagency coordination is inherently very challenging,” Roberts said. “But the agencies have been working together for so many years on CRA and over the past year or so on this particular proposal that I’m hopeful they can do it.”

He recognizes hurdles for the 679-page document.

“There’s going to be a lot of very constructive commentary on this proposal,” he said. “For them to consider that and put a final rule to bed by the end of the year is a challenge. They will have five months to do it, which is pretty tight.”

Roberts said banks will face challenges in implementing the new requirements, including updates to data systems and management of the CRA program.

“Banks have a ton of work to do to adapt to the new regime,” he  said.

ESG Investing: Where it is Now; Where it’s Headed; What to Do
OCC’s Final CRA Rule Weakens Affordable Housing and Community Development Incentives
LIHTC Equity Market is Active in COVID-19 Environment
END_OF_DOCUMENT_TOKEN_TO_BE_REPLACED