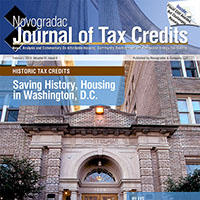 The New Markets Tax Credit (NMTC) program was revived with Congress’ Jan. 2 passage of the American Taxpayer Relief Act of 2012 (H.R. 8). The eleventh hour decision extends the NMTC through 2013 at $3.5 billion per year. A report released in December by the New Markets Tax Credit Coalition confirmed what program supporters have been saying since before the NMTC was allowed to expire in 2011: the NMTC is a sound investment not just for communities, but for taxpayers as well. Statistics show that the program has created thousands of jobs in economically distressed areas and has generated a healthy return on investment.

“We suspected that the program had generated a significant amount of tax revenue and jobs since its inception, and our findings confirm this. Over the course of the program, new markets has generated enough federal revenue to pay for itself,” said Paul Anderson, legislative associate at Rapoza Associates, which compiled the report for the coalition.

The coalition releases progress reports on the amount of the program’s community investments annually, but the recent report is the first of its kind to measure the aggregate economic impact of those investments over the program’s lifetime. The “New Markets Tax Credit Economic Impact Report” measured the impact of more than 2,900 NMTC projects and businesses in distressed communities. Rapoza retained Novogradac & Company to research and analyze data from the U.S. Department of the Treasury’s Community Development Financial Institutions (CDFI) Fund, which administers the NMTC. The report found that the NMTC has supplied more than $20 billion in private capital and has leveraged an additional $25 billion from public and private sources since the first NMTC investment in 2003.

Demand for NMTCs remains high. “In September, 282 CDEs requested $22 billion in NMTC allocation authority and now that Congress has extended the NMTC, with $3.5 billion in allocation authority for 2012, Treasury can respond to this incredible demand for capital to finance businesses and revitalization efforts in low income communities. Without capital that the NMTC delivers, these job-creating investments would not happen,” said Alison Feighan, vice president at Rapoza Associates.

Key Findings
Between 2003 and 2010, the NMTC created nearly 540,000 construction and operational jobs in low-income communities across the country, the report says. Almost 300,000 of these jobs were created directly within the industry of the investment.

Federal tax revenue generated by these jobs translated into a solid return on investment for the government. Through 2010, the NMTC program cost $5.2 billion to the federal treasury for its $20.3 billion in investments. This cost was offset by $5.3 billion generated in federal revenue and $3 billion in state and local tax revenue for the same time period, according to the coalition’s analysis. The report excluded revenue generated by operational jobs prior to 2010, but even with these conservative figures, the group says it’s clear that the NMTC supports itself.

Legislative Support
A year after the NMTC expired, Congress was able to pass the recent extension after several extender bills lingered on the table for months. H.R. 2665 and S. 996 had been in congressional committees since July 2011 and would have extended the NMTC through 2016 with an allocation of $5 billion. H.R. 3224 proposed to extend the NMTC through 2016 with $10 billion but no action was taken after it was referred to committee in October 2011. The program was reauthorized in early January as part of the American Taxpayer Relief Act.

Robert Rapoza, president of Rapoza Associates, attributes the delay in renewal to a combination of factors. “Some members of the 112th of this Congress have been skeptical about the role of the federal government. There is great interest in simplifying the tax code and in reducing the deficit and debt of the federal government. All of these things together have certainly complicated things in terms of considering extenders,” said Rapoza.

Another challenge for NMTC advocates was a newly elected Congress. “There are over 100 new members of the House and Senate. Lots of them have never heard of the [new markets tax] credit … Trying to inform members what these provisions do takes time, particularly when the audience is new to a job in government” said Rapoza.

Feighan believes the recent fiscal cliff bill is a step in the right direction. “Securing the two-year extension provides [community development entities] and investors – and the businesses and low-income communities that rely on NMTC financing – with a level of stability as we move into the tax reform debate,” she said.

A copy of “The New Markets Tax Credit Economic Impact Report” and other program information is available at nmtccoalition.org.

How the Pandemic Has Affected NMTC Equity Pricing and Investments
A Year of Pandemic: IRS Guidance, What’s Needed, What to Do
African American Preservation as an Economic Development Tool
END_OF_DOCUMENT_TOKEN_TO_BE_REPLACED