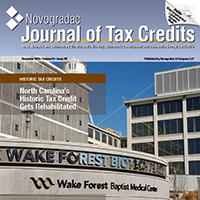 Public and private partners are finding ways to serve more healthy food options to economically distressed communities with a few helpings of new markets tax credits (NMTCs). The 2014 allocation round of the federal NMTC provided no specific set-aside of credits for healthy food financing, yet 51 of the 76 allocatees indicated on their applications that they intend to devote a share of their NMTC authority to financing healthy food enterprises. Common types of projects include food distribution centers, grocery stores and farmers markets.

Data shows that healthy food financing and serving low-income populations go hand-in-hand. The U.S. Department of Agriculture (USDA) estimates that more than half of the 23.5 million people living in “food deserts” nationwide are low-income. Food deserts are census tracts with limited access to affordable and nutritious food.

As part of the federal Healthy Food Finance Initiative, the Community Development Financial Institutions (CDFI) Fund asks NMTC applicants whether they plan to use allocation for healthy food financing investments. The CDFI Fund says that the question is for informational purposes only and that the planned commitments do not affect application scoring. However, the CDFI Fund includes food deserts as one of its NMTC qualifiers for census tracts that meet the “higher distress” criteria.

“The CDFI Fund has highlighted [healthy food] as a priority and the president has highlighted healthy food access as a priority, so as an investor, we have a similar interest in finding and investing in those transactions,” said Laura Vowell, vice president of U.S. Bank’s subsidiary U.S. Bancorp Community Development Corporation (USBCDC). USBCDC has invested in about 55 fresh food projects, including development of a new refrigerated produce processing and distribution facility in Clayton County, Ga., that involved a $27.5 million leverage loan and NMTC investment from USBCDC.

Food retailers typically have high costs and small profit margins, especially in low-income areas, so some food providers can be apprehensive about the additional risk of opening a location in a food desert. “The new markets tax credit subsidy can help operators who are otherwise hesitant to take on the risks related to smaller margins in unproven markets make those investments in low-income areas,” said Kevin Goldsmith, NMTC program director for Chase.

Philadelphia-based nonprofit food bank Philabundance spent two years fundraising to build the Fare & Square grocery store in Chester, Pa., a city that previously had not had a supermarket in 10 years. Philabundance spent two years raising about two-thirds of the necessary funding for Fare & Square before it decided to bring in NMTCs to fill the gap. With the help of NMTC financing provided by The Reinvestment Fund, Philabundance rehabbed the space formerly occupied by the last operating grocery store in Chester. Fare & Square opened in 2013 and provided groceries to nearly 8,000 households in fiscal year 2014. The store employs 30 staff members, a majority of them are local residents.

“Our mission was nutrition,” said Dave Shipman, Philabundance’s senior vice president and chief information officer. “The idea was to set up a local grocery store that provides access to an array of products. … The butcher, dairy, grocery products and fish at discounted prices.”

In addition to discounted groceries, Fare & Square collaborates with local partners to offer programs, such as on-site health screenings and healthy cooking classes. “It’s a really community-centered store,” said Stefanie Arck-Baynes, senior manager of communications and public relations for Philabundance. “We have sign-ups for SNAP [formerly the food stamp program] benefits, health screenings and we invite focus groups [from the community] to provide input on what they would like to see on our shelves.”

Fare & Square also administers the Carrot Club, a shopping incentive program that allows shoppers to use a percentage of their purchases as credit toward future purchases. In early 2016, Fare & Square plans to offer bonus Carrot Club credits for healthy shopping choices. Shipman said that organizations from around the country tour Fare & Square to use it as a model for building their own stores.

As mission-driven organizations, community development entities (CDEs) say fresh food projects are attractive because they provide direct, tangible benefits to low-income persons. “We’re looking to use our allocation to serve low-income communities and often that need is access to healthy food options,” said Goldsmith, who added that in the past five years, Chase has invested in 50 fresh food transactions–with more than a dozen of those transactions closed in the past 18 months. Two of Chase’s newest healthy food investments are turning a vacant department store distribution facility into a mixed-use development with a grocery anchor tenant in Chicago and a 15,000-square-foot grocery store in Detroit that is projected to create 35 new jobs. “More and more, the industry has focused on [fresh food investments],”said Goldsmith. “They’re a catalytic economic driver for the whole community.”

Others agreed. “How do we drive business investment into low-income areas? Healthy food access projects are economic drivers,” said Donna Leuchten, director of healthy food access for The Reinvestment Fund, which has invested $122 million in NMTCs in food distribution centers, grocery stores and other healthy food activities. Leuchten said that healthy food projects create jobs, generate tax revenue and can sometimes even improve home values in low-income communities. “We’ve seen a lot of investors getting excited about projects like these,” said Leuchten. “They hit on all the priorities of the New Markets Tax Credit program.”