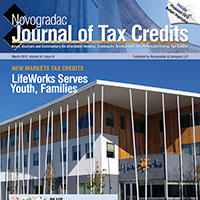 The NMTC Working Group spent numerous hours preparing its comments and the result is the 52-page response that was produced and is now officially available for everyone to read online at www.nmtcworkinggroup.com. The Working Group believes that the comments, considerations, and recommendations submitted regarding existing NMTC rules and regulations, if pursued and adopted, will increase the effectiveness and efficiency of the NMTC program.

The NMTC Working Group also submitted a letter on February 13 to several different agencies in response to a Notice of Proposed Rule Making’s (NPRM) request for public input on the proposed rule that would implement Section 619 of the Dodd-Frank Wall Street Reform and Consumer Protection Act enacted on July 21, 2010. Section 619 prohibits banking entities from engaging in proprietary trading and from maintaining certain relationships with hedge funds and private equity funds (the Volcker Rule). As described in more detail in the Working Group’s letter, recommendations include a proposal that the final rule specifically permit banking entities to continue making NMTC investments and not be limited by the Volcker Rule. The Working Group members also recommend that banks be permitted to sponsor NMTC investments as well as be allowed to engage in “covered transactions” with NMTC investments they make and/or sponsor. The Working Group believes these recommendations are consistent with the intent of the Volcker Rule.

The Volcker Rule generally prohibits banking entities from investing in or sponsoring private equity funds; however, Congress included exceptions for certain permitted activities. One such carve-out, or permitted activity, is for “investments designed primarily to promote the public welfare.” Congress also recognized the benefits of continuing to allow banks to invest in historic tax credit (HTC) funds and created a specific exemption for HTC investments. The NMTC community, as well as other similar tax credit communities, including those of the low-income housing tax credit (LIHTC) and the renewable energy tax credit (RETC), applaud the inclusion of such language since it recognizes and is consistent with Congress’ legislative intent in enacting tax credits that provide incentives for banking entities to make investments in underserved economic areas (Section 45D), affordable rental housing (Section 42), and renewable energy resources (Sections 45 and 48), all of which promote the public welfare. The Working Group recommends that NMTC investments be permitted by the Volcker Rule under the public welfare exception because public welfare investments include investments that serve low- to moderate-income families and communities and NMTC investments are statutorily mandated to serve low-income communities.

The Working Group believes that based in part on the discussion included in the Financial Stability Oversight Counsel’s (FSOC) study, its comments are consistent with the intent of the Volcker Rule. The FSOC realized that Congress may not have intended to capture certain private equity funds that are technically within the scope of the Volcker Rule. The Working Group believes that NMTC investments do not represent a means to circumvent the restrictions on proprietary trading or historically expose banking entities to high risks.

Are you an allocatee, investor, lender or QALICB? Would you like to be part of our group and get the inside track on issues affecting the NMTC Program? Are you a professional that works with NMTC industry participants? Do you have questions about technical program issues you are dealing with? Do you have a great community impact project struggling with a technical issue and can’t move forward until the issue is resolved? Join the NMTC Working Group today and add your issues to the agenda and be part of a strong and active voice in the NMTC industry. For more information about becoming a member please send Cyle Reissig an email at [email protected].

How to Become a Certified CDFI
The Effects of COVID on NMTC Asset Management
Prepare for Success: Four Steps CDEs Should Take Now for the Next NMTC Application Round
END_OF_DOCUMENT_TOKEN_TO_BE_REPLACED