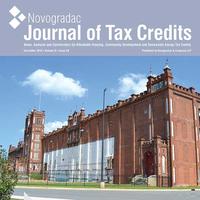 After decades in the making, the Paul I. Terasaki Budokan community center will become a reality in Los Angeles’ Little Tokyo neighborhood.

“The vision for the center was created in the 1970s,” said Erich Nakano, deputy director of the Little Tokyo Service Center, which got involved in the development about 15 years ago and now serves as the developer and owner. “This development will help to reconnect families and young people to Little Tokyo and its Japanese cultural heritage. … This has been a dream in the community for a while.”

The Budokan community center will provide the Little Tokyo community with a safe place to gather, learn about Japanese culture and play sports. “This facility will also provide a space for recreational and afterschool program opportunities for local, low-income youth of all ethnicities–which is sorely lacking in downtown neighborhoods,” said Nakano.

The community center will include a 14,000-square-foot gymnasium with two basketball courts that can be separated by a drop-down curtain, as well as four volleyball courts. Budokan will also rent out its gym space to organizations offering judo, kendo, aikido and karate.

“Basketball and martial arts are big institutions in the community,” said Nakano. “The idea is to provide tournaments, play games and strengthen the community.”

The gym will be available for sports leagues, summer camps, afterschool programs, sports clinics, leadership programs and public access. The development will also feature an 830-square-foot community room and offices for the Little Tokyo Service Center.

Not only will the gym be a place for youth sports, but it will also have ample senior programs, including yoga, tai-chi, reading groups, arts and crafts, and health and wellness education.

Construction began in March and will be completed in November 2019. 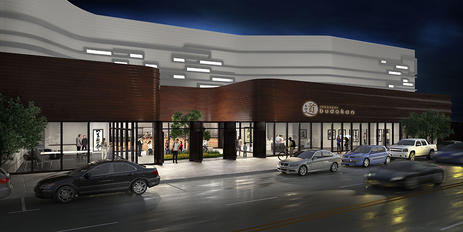 The development faced many challenges over the years. “The main challenge was finding a good site,” said Nakano, who added that funding the development also proved challenging. “Obviously, the price tag of the facility is beyond what we have ever done before,” said Nakano.

The most recent challenge came when the construction budget was much higher than anticipated. “With the construction bid coming in significantly above budget, the closing of the development was delayed for months,” said Wells.

Financial partners agreed that this development wouldn’t have been completed without the help of the NMTC program. Three community development entities (CDEs) came together and provided $31.2 million in NMTC allocation.

The Opportunity Fund provided a $14.7 million NMTC allocation to this development. “This is a great example of the ‘but for’ test,” said Wells. “We often pass on projects because we are not convinced they couldn’t be done without NMTCs.” Wells said it was evident that this development met the “but for” test, given the decades-long struggle to close on the development.

This development was attractive to MBS Urban Initiatives CDE because it previously helped finance two developments within a couple of miles of the Budokan community center. “We look to develop neighborhoods and bring in resources that are missing in communities,” said Tinsley. “This is a cultural and recreational center that will be a great compliment to Little Tokyo and the surrounding neighborhoods.”

Los Angeles Development Fund provided a $10 million NMTC allocation. “This is a project that the city has been supportive of for more than 20 years,” said Sandra Rahimi, manager at Los Angeles Development Fund, a CDE for the city of Los Angeles, which has received $225 million in NMTC allocation authority. “There has been no space in the community to gather or exercise. This project will add that to the community.”

U.S. Bank provided $10.6 million in NMTC equity as well as an $8.3 million short-term bridge loan to bridge the various grant financing. “We typically don’t bridge grant financing. We had to get comfortable with the underwriting,” said Jack Sheehan, project manager at U.S. Bank. “We have a great sponsor, with a great relationship with the community, doing great work.”

“Providing cultural, athletic and communal space for a neighborhood with few alternatives is a fantastic use of the NMTC program,” said Bryan Hung, partner in the Long Beach, Calif., office of Novogradac & Company LLP, whose team consulted on the financial closing process and provided the forecast services related to the multilayered financing. “The NMTC financing was able to bring this development to the finish line.” 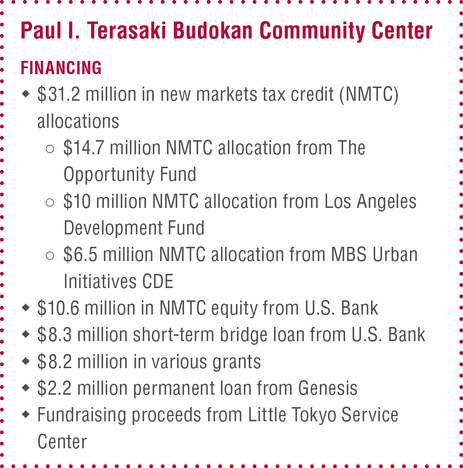