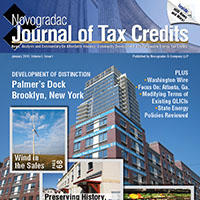 For many people, running out of milk on a Tuesday night is no big deal. They hop in their car or run down to the corner market for more. But, in many lower-income urban areas and smaller towns, there is no local grocery store. In these areas—sometimes referred to in the development community as food deserts—residents may have to take multiple buses or walk several miles to access fresh milk and produce. To reduce the number of such food deserts in the country, several community development entities (CDEs) are using their new markets tax credit (NMTC) allocations to fund grocery stores. This year, The Reinvestment Fund (TRF) closed on an NMTC transaction that brought two supermarkets to Philadelphia, Pa. while the Montana Community Development Corporation (MCDC) used an NMTC allocation to bring a supermarket to the small city of Bozeman, Mont.

“From each [allocation of NMTCs], we have funded the creation of a supermarket in underserved areas. It begins to sew the fabric back together,” said Donald Hinkle-Brown, TRF’s president of lending and community investments.

Development of the La Salle store cost $11 million. The supermarket received $5 million in NMTC allocation and $6 million in subordinate loans and grants, including $3 million from Pennsylvania’s Redevelopment Assistance Capital Program, a grant program for the acquisition and construction of regional economic, cultural, civic and historical improvement projects, and $500,000 from the Pennsylvania Fresh Food Financing Initiative (PFFFI). PFFFI is a grant program funded by TRF, The Food Trust and the Greater Philadelphia Urban Affairs Coalition, which provides financing for supermarkets in underserved communities. The Bancorp Inc. also provided a loan for the store.

“It is a neighborhood that I believe is trying to come back. There was not a supermarket within a one-mile radius. Without the NMTCs we would never have had a normal bank come to this [transaction],” said Patrick Burns, chief executive officer and president of The Fresh Grocer, a 10-store regional grocery chain.

The La Salle store is the first supermarket in the neighborhood in 40 years. The 51,000-square-foot store features fresh fruits and vegetables, meat and seafood cases, prepared foods, a deli, bakery and salad bar.

“It helps [residents] to be able to have the variety of food that they need,” Burns said. Since opening the store, Burns has heard from grateful residents. “People just come up and thank you,” he said, adding that many senior citizens had been taking two buses to get to the nearest store.

The store has also brought jobs to the community. Hinkle-Brown said that one of the reasons TRF decided to invest in supermarkets was because the stores provide employment benefits to low-income areas. “We believe that the neighborhood benefits,” he said.

TRF has found that supermarkets draw the majority of their workers from the surrounding community and that is borne out by the La Salle market’s experience. Most of its employees live nearby, providing stable employment and health-care benefits for residents. “In an urban environment, there’s often more training involved. That’s a cost. Because of NMTCs, [the owner is] willing to incur those costs,” Hinkle-Brown said.

Burns said that he has been able to respond positively to the extra costs of opening a store in an urban area because the NMTC financing provides for lower monthly financing costs. Burns and TRF worked together to create a financial model to keep the store profitable.

“The object of this is not just to build a store and then four years later go out of business … [TRF is] building models for store[s] to work,” Burns said.

More than 2,000 miles away, the residents of the north side of Bozeman, Mont., population 27,500, are anticipating the opening of a new grocery store. Next year, they will have the opportunity to shop for groceries in a renovated building that once housed a movie theater. The Perlinski family will open its third Town & Country Foods on February 1.

Because the north side of Bozeman has not had a grocery store,  many of its residents now drive to the Town & Country Foods on the south side of town to shop. When the new store opens in February, President Carol Perlinski says, Town & Country will be able to serve all of Bozeman better, because the new store will reduce travel time for residents on the north side and alleviate crowded parking conditions at the south-side store.

“There was a real need … for a grocery store,” said Kaia Peterson, loan officer at MCDC. “We were interested in bringing one to that community.”

MCDC provided $2 million in NMTCs in 2009 for the $8.3 million grocery store project. Carol Perlinski, president of Town & Country Inc., approached the CDE about financing the market after she read a newspaper article about the availability of NMTCs for local businesses. Big Sky Western Bank, a subsidiary of Glacier Bank, invested in MCDC’s NMTCs; MCDC is the only Montana-based CDE to receive an allocation of NMTCs.

“The huge advantage was an equity investor,” said Perlinski. “The benefit of paying interest only for seven years really allows us to get on our feet.”

Town & Country Foods will offer basic grocery services as well as a deli, bakery and fresh seafood. Selections will include high quality produce, organic foods, and locally produced and low-cost items. Town & Country keeps its prices low by shelving items in their shipping boxes and having customers bag their own groceries and return carts to the store.

The market’s owners are resurfacing the existing parking lot and landscaping the area as well as replacing the building’s plumbing and wiring. The city of Bozeman and the Montana Department of Transportation installed a new traffic light in December to alleviate the additional traffic that the store is expected to create.

The north Bozeman store will employ about 70 people, including 60 full-time positions, from the surrounding area. The full-time positions will offer salaries above minimum wage, employer paid health-care options and an employee stock ownership plan.

In its conversion from movie theater to grocery store and retail space, Town & County  created 100 construction jobs. The two retail spaces, expected to house a restaurant and offices, will add an additional 40 full-time and 10 part-time jobs to the local economy. The new jobs are expected to decrease the area’s unemployment rate and poverty rates, which currently are 31.1 percent and 30.2 percent, respectively.

How the Pandemic Has Affected NMTC Equity Pricing and Investments
A Year of Pandemic: IRS Guidance, What’s Needed, What to Do
African American Preservation as an Economic Development Tool
END_OF_DOCUMENT_TOKEN_TO_BE_REPLACED