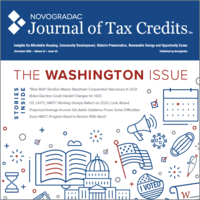 A former textile mill in Greenville, S.C., is being transformed into an 800,000-square-foot multiuse campus in a multiphase development financed with new markets tax credit (NMTC) and historic tax credit (HTC) equity.

Judson Mill is a joint venture of Belmont Sayre and Taft Family Ventures.

“I would say this is one of the best developer partnerships I’ve worked with, because what they’ve done is combined two experts,” said Eric Brubaker, director of acquisitions at HTC equity investor Foss & Co. “[Belmont Sayre’s] Ken Reiter, who I’ve worked with on many projects, is super knowledgeable about mills. He takes the lead with the historic component and Tom Taft [of Taft Family Ventures in Greenville, N.C.] is one of the most successful real estate developers in the Carolinas. To have the combination of an incredibly successful real estate developer with someone with such expertise in historic rehabilitation is a fantastic combination and makes for a successful, one-of-a-kind project.”

While continuing the first phase–204 market-rate and workforce apartments that will open in early 2021–the joint venture recently launched the second phase: A $19 million commercial phase that includes a $16.5 million NMTC allocation from The Innovate Fund. When finished, the commercial property will be anchored by Feed & Seed, a local nonprofit with a mission to increase food security for South Carolinians by using a farm-to-table format for schools, churches, community kitchens, restaurants and individuals. There will be a YMCA that targets low-income residents, a rock-climbing gym and a music venue, as well as other tenants.

Phase 2 will help catalyze the next three phases, a mix of residential, commercial, office and retail use.

Reiter, whose company has been involved in dozens of historic renovations, bought Judson Mill in 2017, when the state HTC in neighboring North Carolina was in danger.

“A group from Greenville came to Durham, [N.C.,] for a roundtable,” said Reiter. “I was looking down the road and asking, ‘how can I do projects in states that still have historic tax credits?’ I looked at several mills in the Greenville area and Millikin and Co. was in the process of shutting down the mill and setting it up for sale. That’s when we jumped.”

“Dustin Mills had experience in historic tax credits with Ken at American Tobacco Company,” said Taft, a former trial lawyer and North Carolina state senator. “When Ken called and I started listening to him, I was attracted to the prospects of restoring what was once the largest cotton mill in the world and was complementary to our current historic restoration plans of a 100-year-old spinning mill as part of a 250-unit market-rate apartment project in a bedroom community of Raleigh. It was complicated, more complicated than anything I’ve dealt with.”

Taft brought in several members, including his sons Thomas and Jonathan, along with his directors of development and construction, all with deep experience. Reiter called the combined group “an all-star team,” which made it easier for investors.

“We really like the development team,” said Chris Leutzinger, NMTC relationship manager at Truist Bank, which invested in the NMTCs. “They have a lot of experience with a large variety of projects and have experience with adaptive reuse and tax credit financing.”

The redevelopment comes 108 years after the mill launched.

Westervelt Mill, as Judson Mill was originally called, opened in 1912 as the first fine goods textile mill in the South. A year later, the name was changed to Judson Mill, after D. Charles Judson of Furman University, the mentor of new mill president Bennette E. Geer. When Geer retired in 1933, Deering Milliken Co. took over operation and bought the mill in 1960. By the time it closed in 2015, the mill was one of the last two mills in the Greenville area and had only about 200 employees, a far cry from its glory days with thousands of employees

After Reiter purchased the building, he applied for National Register listing because it is an example of the once-thriving textile industry in South Carolina. The Phase 2 property benefited from that designation.

“The 100,000-square-foot building is a 1990s addition to a historic building,” Reiter said. “We actually wanted to demolish it and when we talked to the NPS and SHPO, they said, ‘no way.’ I asked if we could get credits on it, which would help. … It started to grow on us and we were allowed to modify it from a historic perspective.”

“What’s really great about this property is that it was functioning and active until recently,” Brubaker said. “Structurally, it’s in great shape. It was a successful business and kept expanding. … For construction, Phase 2 is probably the easiest historic project I’ve seen.”

“It’s a great location,” said Brubaker. “It’s great in that it’s got a little more of a suburban-type feel. It’s a campus. A lot of people want to have access to all the [downtown] amenities, but they want to be able to park.”

Being able to renovate a historic building was attractive to Taft.

“I love repositioning and saving historic structures,” Taft said. “I love the nature of history and the need to stay connected to the past to better understand the future. I also like the sustainability aspect of taking structures that might otherwise be demolished or deteriorate and giving them new life.”

For investors, tenants were important.

“For us to be interested, there has to be the community-focused impact,” Leutzinger said. “This project stood out because it has that component.”

Second-phase tenants will include Feed & Seed, the YMCA of Greenville, Rockoon Climbing Gym and a music venue. The YMCA building will be owned by the property owners and managed by the YMCA.

The four tenants will use about 60 percent of the 100,000 square feet. Reiter said he’s looking to bring in a nonprofit incubator for some of the remaining space.

The Innovate Fund provided the NMTC allocation in two tranches, wrapped into one financial closing.

“We originally approved the project for our last $8 million of NMTC allocation,” said Whitney Ferguson, program manager at The Innovate Fund. “We knew [Reiter] had recently gotten Phase I financed and under construction and had told him for several years to let us know when the first commercial phase was ready to go. The timing was perfect.”

The Innovate Fund made the allocation. Time passed and another option presented itself.

“By the time it was 2020, we had another $8.5 million allocation that, for unfortunate reasons, didn’t make it across the finish line,” Ferguson said. “We went to Ken and said we knew he had enough project costs to support that. We weren’t quite halfway through closing [the first allocation], so he switched the building, which was about 40,000 square feet, to one that’s about 100,000 square feet and the second allocation was used to deepen the rent subsidies to the local and nonprofit-owned tenants.”

For Truist, it required a second decision to invest.

“Like any financial institution, post-COVID, our tax credit appetite has been impacted,” Leutzinger said. “We had to weigh whether we would invest further in the project than initially anticipated, but we felt it was important to support this. Our additional investment will allow more affordable rents to community-focused tenants.”

As expected with a multiphase, multi-investor property, the commercial phase of the Judson Mill redevelopment is complex.

“Pairing new markets tax credits with historic tax credits is always more complex and, in this case, there were about seven financial institutions,” Leutzinger said.

Truist invested $4.9 million in NMTC equity, while Foss & Company–the investor in the federal HTCs and bridge lender for Phase 1–was the investor in both the federal and state HTCs in the second phase. Other financial partners include CommunityWorks and Reinvestment Fund.

“Multiphase projects are hard to get done,” Ferguson said. We’re happy we can come in and get one of the first phases done, which will help finish the rest of the campus. In terms of catalytic impact, this is going to be huge for that community.”

Taft said the magnitude of the property makes it challenging and exciting.

“We’ve never done anything this large, 800,000 square feet,” Taft said. “If you overlay the project size with issues associated with restoring a 100-year-old mill, add complications of tax credits and lay several layers of tax credits on top of each other and start dealing with different levels of financial institutions and underwriting expenses, it’s daunting. We see it increasing our capabilities and our firm wants to grow, have an impact and improve people’s lives.”

Brad Elphick, a partner in Novogradac’s Atlanta office who did the accounting projection work, said this is a high-impact development.

“Judson Mill is complicated, with the multiple phases and all the participants,” Elphick said. “Everyone involved deserves credit, because this will make a major impact in Greenville. It’s an exciting property.”

Ultimately, the goal is for all five phases to complement each other. The second phase is key.

“We think that the more the campus is built-out and the mixed-use component comes in, the better,” Brubaker said. “It’s already phenomenal, but when it’s finished, it’s going to be the most exciting single complex in Greenville.” ;