The west side of Birmingham, Ala., received much-needed economic development in 2011 in the form of a 750,000-square-foot, $50 million sports arena called the Birmingham CrossPlex.

While the CrossPlex brings in high school, college and even Olympic athletes from across the country, the city of Birmingham found that the money wasn’t staying in the Five Points West neighborhood. However, the development of the Birmingham CrossPlex Village aims to change this. CrossPlex Village, part of a 38-acre site adjacent to the CrossPlex, will feature a Comfort Inn & Suites hotel, a Starbucks Commercial Center that will include a restaurant as well as a youth training site for the coffee retailer and Restaurant Row, which will consist of five restaurants as the first phase of development, which is financed with new markets tax credits (NMTCs).

“The CrossPlex brings tremendous traffic to this community, but there has not been significant benefit to the community in terms of job creation and sales tax generation relative to the city’s investments in the area,” said Randall Minor, shareholder at Maynard Cooper & Gale, which acted as special tax credit and incentives counsel to the project sponsor. “The CrossPlex Village development achieves both of these aims. It’s going to be catalytic for the area.” The development will provide a significant economic boost to an area with a 31 percent poverty rate, a median income at 43.7 percent of the national average and a 20.8 percent unemployment rate.

Lisa Cooper, director of the Mayor’s Office of Economic Development for Birmingham, said that Mayor William Bell identified this neighborhood as a high priority for the city. “Downtown gets a lot of interest in Birmingham. The mayor wanted to push development in other communities. West Birmingham was a natural choice after the investment of the CrossPlex,” said Cooper. “This will become a major revenue-generator for the city of Birmingham.”

Development efforts are led by Bob Nesbitt of Urban Community Development Consortium (UCDC), the fifth developer to pursue the redevelopment of this property. With help from Bridget Chisholm, managing partner of development and finance consultant BWC Consulting, the scope of the development broadened. Nesbitt envisioned pursuing the endeavor as many individual projects, but Chisholm suggested that thinking of the anticipated multiple projects as one development was important. Chisholm said, “Tying all the single projects together into one allows for immediate scale and greater impacts that can benefit neighboring communities in the western part of Birmingham as well as the city–the result is a win-win opportunity.” In leveraging NMTC financing, “The new markets tax credits tied these individual developments all together into one project,” said Chisholm.

The 2,500-square-foot Starbucks training center is part of the Youth Opportunity Initiative Program and is one of 15 Starbucks hopes to have in place this year, two of which are in Ferguson, Mo., and Jamaica Queens, N.Y. The focus is to train 18- to 24-year-olds who live in the Five Points West community. The management training program will offer high-quality jobs with benefits. Starbucks will use the location to train approximately 30 employees to operate the store as well as train other Starbucks managers and key personnel from across the country, UCDC notes. Cooper said the Starbucks will also have a community meeting room and said that Lawson State Community College, which is located nearby, has programs focused on the hospitality industry. “I could see the community college as a future connection with Starbucks,” said Cooper.

The Comfort Inn & Suites will feature 101 suite-style rooms and will include a gym and a business center with meeting room space for customers and community members. Chisholm said there is not much lodging and hospitality space in the west side of Birmingham. Development partners agree that the hotel will have a significant impact on economic development for the neighboring community, as there isn’t another hotel for miles. Cooper notes that Comfort Inn & Suites is creating two internship positions to provide experience for individuals interested in a career in hospitality.

The Restaurant Row will feature restaurants, including a Ninja’s, Lin Garden and Yogurt Street. Cooper is happy to see a variety of restaurants being added, as she notes that Applebee’s is the only sit-down restaurant in the neighborhood. The development will create more than 130 permanent jobs and 125 construction jobs. Each restaurant is expected to create 25 to 30 jobs, Chisholm notes.

Construction began in June and the Starbucks is slated to open first, in January 2018. Restaurant Row is expected to open in March 2018 and the hotel will open in May 2018.

The CrossPlex Village development will complement the Birmingham CrossPlex, which features a track and field complex and a 50-meter indoor Olympic-sized swimming pool. The pool natatorium can hold up to 1,200 spectators. The facility is also capable of housing nine indoor volleyball courts. The CrossPlex’s indoor track and volleyball facility holds 4,000 spectators, including VIP suites and has a 5,000-square-foot meeting hall as well as a 5,000-seat basketball arena. The facility can be configured to hold wrestling, cheering and gymnastic events.

Phase two of the Birmingham CrossPlex Village will augment the goods and services provided in the first phase. There are plans to incorporate a Walgreens store and medical offices may become a part of the development, as the Princeton Baptist Medical Center is nearby. There will be a business incubator space with 20 stalls for barbers, cosmetologists and beauticians. The city, which owns property adjacent to phase one, is considering installing additional entertainment facilities such as an amphitheater. 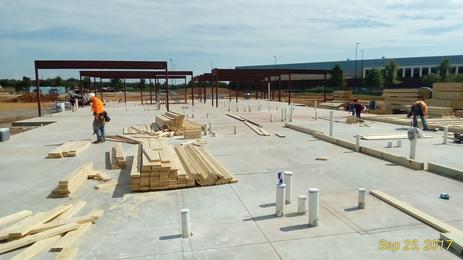 Image: Courtesy of BWC Consulting
The Birmingham CrossPlex Village will feature a Comfort Inn & Suites hotel, a Starbucks Commercial Center that will include a restaurant as well as a youth training site for the coffee retailer and Restaurant Row, which will consist of five restaurants as the first phase of development.

Development partners agreed that the Birmingham CrossPlex Village would not have been possible without NMTCs. U.S. Bancorp Community Development Corporation (USBCDC) was the sole NMTC equity investor, providing $7.1 million. “We are thankful to be part of a project that will have an incredible impact on this part of Birmingham,” said Jennifer Westerbeck, vice president of USBCDC. “This is the first investment in the community in at last 20 years.” Westerbeck said Birmingham, as part of its redevelopment plan, built a transportation hub adjacent to the CrossPlex.

Three community development entities (CDEs) came together to provide a total of $20.5 million in NMTC allocation. Empowerment Reinvestment Fund was the lead CDE in the development, providing a $9 million NMTC allocation. “This project really aligned well with our multipronged strategy. We like to invest in transactions that provide low-income individuals with meaningful jobs,” said Aisha Benson, executive vice president of TruFund Financial Services. Empowerment Reinvestment Fund, which is a subsidiary of TruFund, received a $55 million NMTC award in the combined 2015-2016 allocation round. “This part of Birmingham has suffered [from] years of disinvestment,” said Benson, who added that many businesses have closed recently and the area has a high unemployment rate and few services for residents. Benson said that TruFund is ready to provide technical assistance and small business loans to construction companies working on this development and to the restaurants moving in. Benson said it was attractive to work on a development with complete support from the city.

Stonehenge Capital provided a $7 million NMTC allocation to the development. Ryan Congrove, senior associate at Stonehenge Capital, said that while the CrossPlex was built in 2011 to drive economic development in the west side of Birmingham, it wasn’t as impactful as the city hoped. L’Quentus Thomas, director at Stonehenge, noted that NMTCs played a key role in creating the economic opportunities the area needed. “Despite having this great venue, there really aren’t very many hospitality and food-service amenities on the west side of Birmingham,” said Thomas. “With this project, teams visiting can now stay and dine adjacent to the facility, providing a better opportunity for dollars to circulate locally.” He added: “With this investment, the CrossPlex will become another example of the transformative impact new markets tax credits can have in minority and low-income communities. Stonehenge strives to identify minority communities with a need for business investment and help them overcome the disparities they face with economic opportunities.”

Enhanced Capital provided a $4.5 million NMTC allocation. “We do have a focus of working with minority-owned and -controlled businesses,” said Richard Montgomery, managing director of Enhanced Community Development. “The city put a lot of money into the CrossPlex, but there has been no development around it. The city has made it a priority to build here. … The city has a lot of skin in the game.”

Brittany Major, vice president of Enhanced Capital, added that the development is in a severely distressed census tract with limited amenities nearby. She noted the closest hotel was miles away. Catherine Blume, vice president of Enhanced Capital, called the development a “hallmark of the NMTC’s ‘but for’ test. It really would not have gotten done without NMTCs.”

In addition to the NMTC financing, the capital stack for the Birmingham CrossPlex Village included a $14 million bond issuance from BBVA Compass, a $14 million leverage loan from UCDC, backed by the city of Birmingham, and $500,000 in equity from the project sponsor. Before the development took place, the city invested $6.2 million to build up the site’s infrastructure, including sewers and various utility lines.

“The development of the Birmingham CrossPlex Village will bring jobs and much-needed goods and services to west Birmingham,” said George Barlow, manager in the Dover, Ohio, office of Novogradac & Company LLP, which provided transaction advisory services and prepared the financial forecast for the financial closing. “The economic impact that the development will have on this area makes it the perfect fit for the NMTC program.” 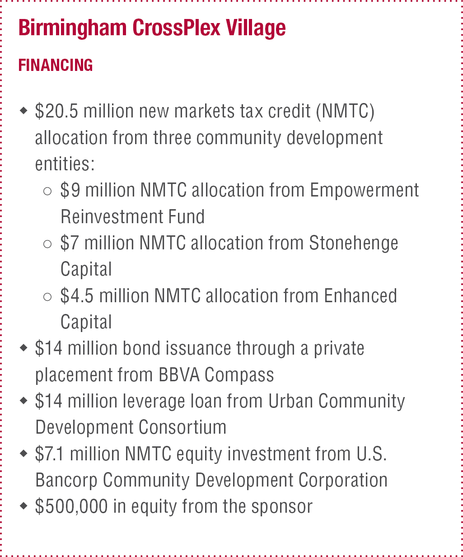