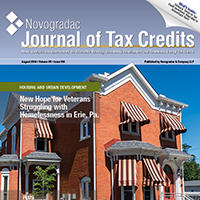 Pennsylvania has the fourth-highest veteran population in the United States at just more than 939,000; behind only California (1.85 million), Texas (1.68 million) and Florida (1.58 million), according to the U.S. Department of Veterans Affairs. To help veterans struggling with homelessness, Housing And Neighborhood Development Service (HANDS), a nonprofit housing owner, developer and manager, built Freedom Square and redeveloped the Goodrich House in Erie, Pa.

The two adjacent buildings have a combined 31 apartments and townhomes reserved for veterans struggling with homelessness. The developments consist of 25 one-bedroom apartments and six three-bedroom townhomes, ranging from 550 square feet to 1,400 square feet. Five units are fully accessible, including two homes reserved for those with hearing and vision impairments.

“This is one of the most vulnerable segments of our population,” said Brian Hudson, executive director and CEO of the Pennsylvania Housing Finance Agency (PHFA), which provided the low-income housing tax credit (LIHTC) allocation to Freedom Square. Providing housing and services is, “the key to getting veterans back into society,” making this development a great fit for the LIHTC program, said Hudson.

This was an unusual development because it had both preservation and new construction components. The Goodrich House was built in the 1850s as a single-family homestead and a century later, it was converted into a nursing care facility. HANDS transformed this building into six units of permanent supportive housing for veterans. While HANDS worked to preserve some of the historical significance of the building, it did not use historic tax credits (HTCs). The State Historic Preservation Office said that the Goodrich House had been modified beyond its original historic significance, said Matthew Good, real estate development director at HANDS. As a result, the building was not eligible for the National Register of Historic Places, said Good. He added that most of the preservation work went into preserving the façade of the building. “There is some degree of history here. We went the extra mile to preserve it,” said Good. “We felt this investment was important because it serves as an anchor in this neighborhood. It’s a beacon of light in this tipping-point neighborhood.”

Freedom Square is a 25-apartment development with 19 one-bedroom substantially rehabilitated units and six three-bedroom new-construction apartments. Freedom Square also has a library, a community room with a kitchen, a fitness center, a computer room, on-site storage and parking, as well as a resident resource coordinator on-site. All communal amenities are shared by the two developments. The homes include Energy Star-rated appliances and windows, central air conditioning, in-unit washing machines and dryers and secured entrances.

The development works in coordination with the Erie Veterans Affairs Medical Center, which is only about 2 miles away. In fact, the VA will have access to office space on the property, where it will conduct case management work. Michael Wehrer, homeless care team supervisor at Erie Veterans Affairs Medical Center, said that he is excited to work with HANDS to come up with other ways for the VA to partner with Freedom Square, including possibly offering dietary classes and other services.

“The development provides housing resources designed specifically for veterans. It helps veterans to feel like they have a community,” said Wehrer. “Having a community like this gives them support from other veterans. This environment encourages them to be successful.” The VA will also administer U.S. Department of Housing and Urban Development (HUD) Veterans Affairs Supportive Housing (VASH) program vouchers to eligible tenants. “HUD provides the financial benefits through Section 8 and the VA offers case management and an array of other services,” said Wehrer.

The housing and services at Freedom Square and the Goodrich House fill an immense need in Erie. Of the 6,300 veterans living in the city of Erie, 15 percent, or 945, are at risk and are living at or below the federal poverty level, according to HANDS. Of this group, 36 percent experience a mental or physical disability, according to HANDS.

“We recognized early on that each veteran also has emotional needs, other support requirements,” said Charles Scalise, president and CEO of HANDS. In order to provide proper care, HANDS organized a number of focus groups during the planning stages of this development with veterans and Erie Veterans Affairs Medical Center. “We learned a lot about the proper way to approach the social needs of veterans,” said Scalise. Wehrer said, “It is important to note that HANDS went out of their way to get veterans input during this process.”

These buildings were funded under two separate transactions. PHFA provided a $7 million LIHTC allocation to the development of Freedom Square. Hudson said that the housing finance agency used to provide a LIHTC allocation to one veterans housing development every two to three years. However, in the past four years, he said that PHFA has funded about three veterans’ developments each year. He cited the increasing demand for this recent rise. Hudson likes this development because “it has a strong counseling network on-site.”

The PHFA awarded Freedom Square LIHTCs under its supportive services set-aside. The PHFA receives roughly $29 million in credits each year to allocate. Due to increasing demand for the credits, Hudson said that typically only one in three applicants receive funding. In the current round, for example, about 30 developments will receive an allocation of credits out of the 111 applicants.

City Real Estate Advisors (CREA) provided the $6.6 million 9 percent LIHTC equity investment. “We have worked with HANDS before. We think very highly of them as a developer, manager and supportive service provider,” said Michael Murray, senior vice president of acquisitions at CREA. “This project is focused on veterans. Being a veteran myself, I was very keen on working with (HANDS). They are unique in their ability to create these affordable supportive communities, which makes them attractive to us.”

Freedom Square financing also included $911,000 in HOME Investment Partnership program funds from the city of Erie, a $38,000 soft loan from The Reinvestment Fund and a $70,000 grant from the Pennsylvania Department of Transportation toward operating costs. Finally, HANDS contributed a subsidy that will go to three units reserved for tenants earning at or below 20 percent of the AMI.

The Goodrich House used a $497,000 Affordable Housing Program loan from the Federal Home Loan Bank of Pittsburgh, $480,000 in HOME Investment Partnership program funds from the city of Erie, $40,000 Affordable Housing Trust grant from Erie County government predevelopment fund, $25,000 in donations from various donors and a $12,000 soft loan from The Reinvestment Fund. This side of the development also benefited from a number of volunteers. Volunteers from General Electric helped paint the Goodrich House and Erie Insurance Exchange volunteered alongside them. In addition, volunteers from Erie Bank did the landscaping.

“This allowed a group of people from large corporations to get on the site and experience what affordable housing is like,” said Scalise. “An unintended benefit was that it broke down barriers of how people see affordable housing.”