Novogradac QOF Report Shows Big Jump in Last Half of 2021 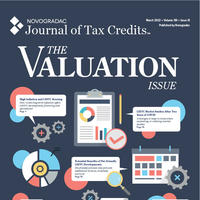 Investment in qualified opportunity funds (QOFs) tracked by Novogradac increased nearly 40% over the final six months of 2021–climbing from $17.52 billion to $24.40 billion.

The $6.88 billion in additional investment in opportunity zones (OZs) was the largest increase in the dollar amount of equity raised in a single reporting period since Novogradac began tracking QOF data in May 2019. The data comes from the Novogradac Opportunity Zones Investment
Report, Data Through Dec. 31, 2021, which was released Feb. 15.

At the end of 2021, Novogradac was tracking 1,342 QOFs, of which 978 reported a specific amount of equity raised. Both the number of QOFs and those reporting a specific equity amount increased nearly 15% in the final six months of 2021, while the total equity raised increased 39.3%.

Novogradac’s information comes from a rolling collection of information–some of which is voluntarily submitted by QOFs and other that comes from public sources, including press releases and Security and Exchange Commission filings. The Novogradac data does not include proprietary or private funds owned and managed by their principal investors, so the total amount invested in QOFs is likely three or four times the Novogradac figure. However, the Novogradac total is an apples-to-apples comparison over time and was used by the White House Council of Economic Advisors in an August 2020 report on the OZ incentive.

The Novogradac data at the end of 2021 reveals that nearly two-thirds of QOFs that report an equity amount have raised less than $10 million–but the average amount of equity raised is $24.9 million per QOF, a figure boosted by the fact that five QOFs have raised more than $500 million and 48 others have raised $100 million to $500 million.

Residential and commercial development continue to be the leading areas of investment for QOFs, as those areas are considered an area of interest for most QOFs on the list.

The jump in investment from the end of June 2021 to the end of December 2021 may have been partially driven by the need to make investments by Dec. 31, 2021, to benefit from a 10% basis step-up. That benefit means that 10% of the originally deferred gain is permanently excluded and the 2021 date is significant because the OZ incentive is set to expire at the end of 2026.

The Novogradac report also revealed anecdotal information of repeat investors and QOF managers building on track records of success, meaning the tax benefit is only one factor in driving investment.