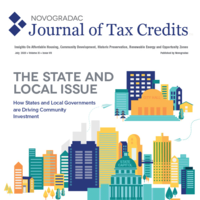 In the first major Community Reinvestment Act (CRA) regulatory reform in 25 years, the Office of the Comptroller of the Currency (OCC) released a final rule on implementation of the CRA that will weaken incentives for bank financing for affordable housing and community development (CD).

Many banks will stay involved for other reasons, but CRA will be less of a factor.

The OCC’s action surprised most observers in two respects.

The first surprise was timing. OCC finalized the rule May 20, within six weeks of the deadline for public comments on the proposed rule.  The proposed rule received 7,500 public comments, many of which were critical of many provisions of the proposed rule. That is much faster than usual for a major regulation, especially on so complex a topic. The OCC’s head, Joseph Otting, announced his departure from the agency the next day.
Second, the OCC acted alone. It has generally been customary for all three federal banking agencies—OCC, the Federal Reserve Board, and the Federal Deposit Insurance Corporation (FDIC)—to make CRA policy jointly to maintain a level playing field among banks and avoid confusion among interested parties. The FDIC, which had been working closely with OCC for two years, surprised observers by abandoning ship late in the process. The Federal Reserve Board (Fed) never got on board with OCC’s approach, instead laying out its own different principles that could guide future proposals.

This means that the new rules will apply to most of the national banks that OCC supervises, except that wholesale and limited purpose banks will still have only a CD test and small national banks can continue to use current evaluation measures or opt in to the OCC’s new regime. OCC’s new list of eligible activities will apply to all national banks. State-chartered banks supervised by the Fed and FDIC will follow the current policies. Affordable housing and community developers will want to know which set of rules applies to each bank they engage.

OCC’s isolation reflects unusually broad opposition to its approach among banks, communities and others. As OCC acknowledged, “Although commenters disagreed with the approach outlined in the proposal, the agency ultimately agreed with the minority of commenters who expressed support for the proposed framework.”

The “CRA evaluation measure” will be a ratio of the combined dollar volume of a bank’s entire CRA activity relative to the bank’s domestic retail deposits, both nationwide and in its local market “assessment areas.” The final rule includes loans and investments originated each year, in addition to older loans and investments on a bank’s balance sheet. That marks a welcome expansion from the proposed rule, which would have focused almost exclusively on a bank’s balance sheet holdings. Nevertheless, a single loan held for five years will count as much as five loans made and sold on the secondary market within a year. That feature downgrades new lending and investing, significantly distorting the incentives driving banks to meet the OCC’s standards.

Many stakeholders also complained that the same ratio cannot adequately reflect the vast differences among banks and communities. A common criticism is that dollar volumes will not capture a bank’s responsiveness to community needs and that promised “performance context” adjustments will be superficial and unreliable. Banks also complained about substantial new data collection and reporting burdens, while community groups objected to reduced performance data transparency and public engagement.

Moreover, OCC decided to postpone setting the specific ratios a bank would need to achieve a presumptive outstanding or satisfactory CRA rating. Under the proposed rule, a bank’s CRA rating would be outstanding if CRA activities total at least 11 percent of the bank’s domestic retail deposits and satisfactory if the total is 6 percent to 11 percent. A bank would also get some credit based on the share of its branches that serve low- or moderate-income (LMI) neighborhoods. In addition, the presumptive rating could be raised or lowered, based on a bank’s performance context and any unresolved discriminatory or other illegal consumer credit practices. The proposed rule would have allowed OCC to adjust these targets over time.

However, OCC lacks the data needed to justify any specific ratings threshold, a reality conceded when the agency formerly asked banks to share the requisite data the day after releasing its proposed rule. After few banks could provide the data either, OCC was forced to postpone setting the standards. Meanwhile, Urban Institute models projected that 80 percent to 90 percent of banks would receive outstanding ratings under the proposed rule, a vast increase compared with current ratings. Many observers doubt the CRA evaluation measure will ever work adequately.

OCC’s new CRA evaluation measure could significantly reduce incentives to finance CD, which under CRA includes affordable housing (other than home mortgages), economic development, community services, neighborhood stabilization and revitalization, and disaster area relief and recovery. Under current policy, CD investments are one of three tests (along with lending and services) in the exam and CD lending is separately considered within the lending test.

OCC’s new framework eliminates these elements. In their place, CD activities are included in the CRA evaluation measure and banks would also have to meet a separate “CD minimum” activity threshold. Double-credit “multipliers” are awarded, to the extent a bank’s CD activities exceeds the bank’s previous level, for affordable housing loans, most eligible investments (except mortgage-backed securities and municipal bonds), retail loans generated by branches in LMI neighborhoods, and support for CDFIs, minority and women-owned banks, and low-income credit unions. An additional double-credit multiplier applies to all CRA activities (not just CD) in certain “CRA deserts”, and the two kinds of  multipliers can be combined–effectively a four-times multiplier–based on OCC’s determination of the activity’s responsiveness, innovativeness, or complexity.

Separately, each bank would have to achieve at least a minimum level of CD activity, again both nationwide and in a bank’s local assessment areas. While the proposed rule set the CD minimum threshold at 2 percent of domestic retail deposits, the final rule put off setting a specific percentage as it did with the presumptive rating thresholds. Here, too, there are concerns about whether this requirement will be meaningful in most cases.

First, if OCC sets the threshold low enough for the vast majority of banks to pass their exams, as they currently do, the CD minimum won’t be very meaningful, except perhaps in rural markets where CD opportunities are few and far between. Second, OCC has significantly expanded the range of eligible CD activities so there is no assurance that banks will maintain their current focus on affordable housing and economic development.

On balance, many CD practitioners worry that banks will favor activities, such as consumer lending or holding mortgage-backed securities, that banks make in their ordinary course of business or can more easily generate high volume at less cost over loans and investments that are more impactful but also more challenging. That does not mean that banks will stop making CD loans and investments that make sense for business reasons, but rather that CRA may provide less motivation. For example, pricing for tax credit investments could drop, making some deals harder to do or even infeasible unless additional subsidy is provided.

A similar pass-fail test will also apply to the geographic and demographic distribution of retail loan originations, including home mortgages, small business and farm loans, and consumer loans. Again, the proposed rule specified thresholds, but the final rule backs away from them for now. The standards as proposed risked starting a race to the bottom, where banks reduce CRA-eligible retail lending over time.

Another set of changes will affect where activities will be considered. Under current policy, banks get credit for activity within the local market assessment areas–mostly metropolitan areas or counties–though some CD activities in broader statewide and regional areas (BSRAs) also count. The final rule eliminates BSRAs, but does count activities nationwide toward bank-level CRA evaluation measure and the bank-level CD minimum, a change that could facilitate regional and nationwide activities. In addition, internet banks and others that collect most of their deposits from customers outside traditional or “facility-based” assessment areas will establish additional assessment areas as large as states where they get at least 5 percent of their deposits. Places with large populations are the mostly likely to be designated as these new “deposit-based” assessment areas. Rural communities stand to benefit from a separate provision allowing banks to treat the entire non-metro portion of a state as a single assessment area that will carry more weight than smaller, more fragmented non-metro areas now do. This change could reduce the tax credit pricing disadvantage that rural projects sometimes face.

These structural changes have overshadowed several important details regarding affordable housing and other CD activities.

Finally, full implementation of the final rule will take years, since several elements will not take effect until 2023. Moreover, CRA has become politically volatile and key House Democrats have already introduced a resolution to nullify the rule, and a number of community groups have filed a lawsuit to block its implementation. Many observers speculate that if the White House changes hands after the November election, a new Democrat-appointed Comptroller of the Currency will revoke or rework the rule.

The story may not be over yet.

Buzz Roberts is president and CEO of the National Association of Affordable Housing Lenders.