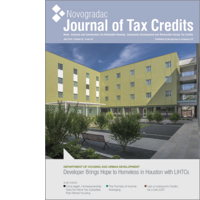 Even after tax reform, home ownership is on target to receive far more federal tax subsidies than rental housing.

According to an analysis by Novogradac & Company of homeownership and rental subsidies included in the recent Joint Committee on Taxation (JCT) report, “Estimates of Federal Tax Expenditures for Fiscal Years 2017-2021,” the federal government will provide more than $400 billion in tax subsidies for homeownership over the five-year period covered. For rental housing, it’s a bit less than $72 billion.

The margin is slightly smaller than in the past, but still a significant difference–especially considering the ongoing crisis of affordable rental housing need in America. “The Gap: A Shortage of Affordable Homes,” published by the National Low Income Housing Coalition this year, described it this way: “One of the biggest barriers to economic stability for families in the United States struggling to make ends meet is the severe shortage of affordable rental homes.”

That shortage is magnified by the JCT report, which shows the margin by which the tax code favors homeownership.

This is generally an annual report, required by the Congressional Budget and Impoundment Control Act of 1974 to measure tax expenditures–defined as any reduction in income tax liability that results from special tax provisions or regulations that provide tax benefits to a particular taxpayer.

This year’s JCT report is the first since the passage of the Republican tax legislation that lowered the corporate tax rate significantly and nearly doubled the standard deduction, which made the mortgage interest deduction less valuable to many homeowners, and capped all state and local tax deductions—mostly income and property taxes—at $10,000.

For a married couple filing jointly in 2018, the standard deduction will jump from $12,700 per year to $24,000 per year–a provision that is set to expire in 2026. Since the mortgage interest deduction accounts for a large percentage of many families’ itemized deductions, a higher standard deduction means that many taxpayers will switch from itemizing this year. At least partly because of that, the mortgage interest deduction subsidy will drop from $66.4 billion in 2017 to $40.7 billion in 2018. The JCT estimates it will go down to $33.9 billion in 2019 before starting to climb again.

Even with that drastic decline, the federal home mortgage deduction will cost the government more than five times the “cost” of the low-income housing tax credit (LIHTC) over the next five years ($216.6 billion to $46.9 billion).

That homeownership receives more federal subsidies than rental housing is no surprise. After all, 64 percent of Americans are homeowners–a percentage that rose last year for the first time in more than a decade. However, 64 percent of the population receives nearly 85 percent of housing tax subsidies in the Internal Revenue Code, according to the JCT report.

The mortgage interest deduction isn’t the only homeowner subsidy included in the JCT report. The exclusion of capital gains on home sales is expected to “cost” the government $182.6 billion over the five years, putting it among the 10 largest subsidies in the tax code.

The information comes from a JCT report that estimates the costs of more than 200 tax expenditures for fiscal years 2017-2021.

There are 17 different expenditures of more than $100 billion during the five-year period. The LIHTC–a reminder, the number is $46.9 billion–ranks 26th on the list of expenditures.

For context, the following six items will account for at least 10 times as much in expenditures as the LIHTC over the five-year period from 2017-2021, according to JCT:

This year’s numbers are no exception to history. Since Novogradac & Company began analyzing the housing incentives in the federal tax code, homeowners have received a disproportionate amount of the benefits year after year.

Last year–before the tax legislation passed and when the deduction for property taxes on real property was included (it cost $180 billion for 2016-2020, but no figure was given by the JCT this year. However, we estimate it at $68.3 billion)–the margin was nearly 10-to-1.

Two items that could be considered expenditures are omitted from our list. First is the U.S. Office of Management and Budget (OMB) calculation for the cost of the passive loss exception for individuals, primarily because it applies to all real estate, not just housing. The passive activity rules also limit the ability of taxpayers to deduct losses and claim credits from residential rental businesses–which means it’s a revenue-raiser rather than tax expenditure.

Similarly excluded from this analysis was the JCT’s calculation of $5.9 billion in foreign housing exclusion and deduction for individuals, since it’s unclear how much this benefits homeowners versus renters.

Additionally, the OMB estimates that the exclusion of net imputed rental income will be $658 billion over 2017-21 and the deferral of income from installment sales to be $8.5 billion over that period. Both were generally excluded from our analysis, even though they would further add to the imbalance in favor of homeownership.

The JCT numbers provide a different comparison than appropriations and direct spending, largely because it’s difficult to estimate the value homeowners receive from government-sponsored entities such as Fannie Mae and Freddie Mac. Also difficult to calculate are expenditures that benefit both renters and owners, including such programs as the Community Development Block Grant and other community development funds.

The Need for Affordable Housing

For the five-year period from 2017 to 2021, the JCT estimates that federal expenditures for five significant benefits for homeowners will be $409.9 billion. Of the five categories included in this year’s report, two increased from the 2016-2020 report issued last year, when those five (excluding the deduction for property taxes on real property, which was included last year, not this year) totaled $535.6 billion. This year’s total was down.

Meanwhile, the JCT estimates federal tax expenditures for rental housing during the 2017-2021 period at $71.7 billion–including $46.9 billion for LIHTCs. That compares to $71.4 billion in the 2016-2020 report, essentially the same cost after adjusting for inflation.

Given that the ratio of homeowners to renters is about 1.77 to 1, tax expenditures for rental housing would need to increase more than 200 percent ($160 billion) to be brought into balance.

After significant tax reform, Congress should consider narrowing the gap between tax subsidies that benefit homeowners and those that benefit renters. There are practical and demographic reasons.

Renters are getting older, too. The report “State of the Nation’s Housing” by the Joint Center for Housing Studies at Harvard University last year (this year’s report was due in mid-June) said that 44 percent of renter growth from 2005 to 2016 came from households aged 55 and older.

Renters are becoming a larger part of the population and getting older, but the American tax code continues to offer support for homeowners that far outstrips that for renters.

If and when Congress tweaks the tax code again–whether as widespread adjustments or things as targeted as passing the Affordable Housing Credit Improvement Act, which would dramatically increase the supply of LIHTCs–legislators should be careful to shrink the gap between the subsidies it provides for renters and homeowners.