Opportunity Zones: Building the Plane While Flying It 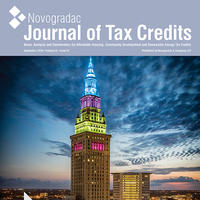 A popular Silicon Valley idiom that has been heard across the nation is particularly appropriate in conveying the state of mind of community development professionals working with the opportunity zones (OZ) incentive: “We’re kind of flying the plane while we’re building it.”

The OZ incentive is available, but many questions are unanswered. As a consequence, many users of the incentive are moving forward, but doing so slowly, cautiously and in limited ways.  As myriad OZ tax questions are answered and, as importantly, patterns of practice develop, use of the OZ incentive will greatly expand, larger dollar amounts will be invested and the great potential of opportunity zones will begin to be realized.

To continue to do our part in helping develop a more in-depth understanding of the OZ initiative, the Novogradac Journal of Tax Credits this month is launching an OZ section–highlighted by an interview with an author of the original OZ legislation, Sen. Tim Scott, R-S.C., on page 8. In addition to coverage in these pages, Novogradac will offer its first Opportunity Zones Conference Oct. 2-3 in New Orleans.

Last winter’s landmark tax legislation had substantial highlight provisions–a reduction of the top corporate and individual rate, an increase in the standard deduction, a cap on state and local tax deductions and more–but it also created the first significant community development tax incentive introduced and signed into law since the Clinton administration: opportunity zones.

The incentive allows investors to defer paying taxes on gains if they invest those gains in OZs thorough opportunity funds.  The gains are deferred until the earlier of the date the investment in the fund is sold or exchanged or Dec. 31, 2026, and the gain recognized is the lesser of the amount of gain originally deferred or the excess of the fair market value of the investment over the taxpayer’s basis in the investment.

Purpose of the Incentive

The OZ incentive is an attempt to stimulate the economy, particularly in communities still recovering from the Great Recession. It first appeared as the Investing in Opportunity Act, which was introduced in both houses of the 114th Congress in 2016, and again in this Congress, in February 2017. The 2017 House version reached 82 co-sponsors, the Senate version 15. Ultimately, the provisions became part of the tax legislation that passed in December 2017.

It is a landmark incentive.

While there are similarities between the OZ incentive and tax credit programs such as the new markets tax credit (NMTC) and low-income housing tax credit, there are significant differences.

The NMTC is most often cited as complementary to the OZ incentive and that’s a significant word: complementary, not duplicative.

There are significant differences.

For the OZ, there is tremendous potential, as there are trillions of dollars held by U.S. investors in unrealized capital gains in stocks and mutual funds.

There has been significant progress in the months since the introduction of the OZ incentive.

The OZs were nominated by governors this spring–areas comprising up to 25 percent of census tracts in each state that qualify by having poverty rate of 20 percent or more and median family income of 80 percent or less.

Several opportunity funds have also been created, with stated goals such as affordable housing, renewable energy and more. While some investors are willing to jump into the incentive with the limited guidance granted so far, even more investors–those capable of funding the type of development that makes major community impact and attracts attention of those outside the incentive–are likely awaiting guidance.

The letter focused on 11 specific questions about issues around which the lack of guidance is the most common barrier to investment by taxpayers and hoped that the IRS would provide leadership on them.

There were five general areas of requested guidance:

Focusing on one group of questions illustrates the difficulties faced without proper guidance from Treasury by participants in this incentive: the qualification of OZ businesses.

For instance, the legislation says that in order to qualify as an OZ business, “substantially all” of the business’s tangible property must be OZ business property. However, there is no definition of “substantially all.” The OZ Working Group suggests 70 percent, because the interpretation in most other tax incentive statutes have settled on 70 percent to 85 percent to define that term.

The OZ businesses questions highlight a truth for most legislation, particularly those involving the tax code: It’s complicated and it takes time to settle.

The need for guidance in a new program is familiar ground for those who have been around long enough to remember the launch of the NMTC program.

After President Clinton signed the legislation that created the NMTC program (The Community Renewal Tax Relief Act of 2000), it took a few months before the first guidance was issued by the CDFI Fund. That guidance came out at the same time as an advance notice of proposed rulemaking from the IRS focused on tax issues relating to the NMTC program, one seeking public comment about tax issues.

Subsequent to that were a series of revenue rulings, private letter rulings, IRS notices and more.

In the nearly 18 years since the passage of the bill creating the NMTC, there have been dozens and dozens of documents and notices clarifying and regulating the program, enough to fill screen after screen of a page at www.newmarketscredits.com devoted to such regulations.

A key lesson to learn from the NMTC community is the importance of staying engaged. The NMTC Working Group–similar to the OZ Working Group, but not created until nearly six years after the enactment of the titular legislation–has submitted more than 60 letters commenting on such things as allocation agreements, the use of census data, how to make the program more effective and more.

The OZ community has a similar opportunity from the start. The OZ incentive is just months old and the interest from the investment community, the clear need that exists in the designated OZs and the eagerness of groups such as the OZ Working Group to get involved in shaping the enactment illustrate the incentive’s considerable potential.

While we don’t know all we need to know from Treasury about some provisions of the OZ incentive, we do know this: People are interested in the OZ incentive and eager to go.

Investors, businesses and communities are largely already airborne, building the plane while flying it. Guidance from the tower–in this case the federal government–will help expand its capabilities and make it a much smoother, safer flight.