One of America’s first shelters for battered women is getting a significant upgrade by adding beds, enhancing programs and upgrading its security, thanks to equity leveraged using  new markets tax credits (NMTCs).

The Women’s Center and Shelter of Greater Pittsburgh will update its three-story, 38,000-square-foot building, allowing the shelter to expand and enhance programs for abused women and their children.

“In addition to newer things and greater capacity, the main thing is that the space has dignity to it,” said Sara Davis Buss, president of the board of directors. “Before, you couldn’t tell if our building was a jail or a safe fortress. We want a sense of security, but this space was designed and built with the victims of domestic violence and staff in mind. The space, the colors and the surfaces are all designed to help victims heal from the trauma of domestic violence.”

That makes a difference.

“I would say of all the site visits I’ve done, this impacted me the most,” said Charlotte Folmer, executive director of Commonwealth Cornerstone Group (CCG), a community development entity (CDE) that allocated $5 million in NMTCs to the project. “I wasn’t prepared for the impact. You see the lack of security there and hear the stories. You see families–with preteens all the way to young children who haven’t been to school because they have an abusive father. It’s kind of heart-wrenching to see. It’s good that they can expand and update the whole property.”

Dave Gibson, NMTC product manager at the PNC Tax Credit Investment Group, the lone NMTC investor, said the history of the organization made it an easy decision to fund. “The organization has been around 40 years. They understand the need for evolving and comprehensive programs and the results for their clientele are phenomenal,” Gibson said. “They’ve been in their space for more than 20 years. Security concerns, given the nature of what they do, had limited their ability to renovate the facility as they have grown, and the needs of their clientele has evolved. The NMTC investment allows them to both stay on-site with substantial program expansions and enhancements and be catalytic for the neighborhood.”

This upgrade is the latest step in a 40-plus year history of the organization.

In Need of an Upgrade

Founded in 1974 as one of the first handful of shelters for battered women in the nation, the shelter operated out of a storefront. In the early 1980s, the organization raised more than $1 million to create a larger shelter with capacity for 32 women and children and in 1994, the Women’s Center and Shelter purchased and renovated a former automobile showroom to serve as an administrative office, nonresident counseling space and residential location. It was a 36-bed facility, but two decades later, it’s no longer large enough to support the demand. In 2016, the center had to turn away 262 women and 234 children due to limited space.

“Probably five years ago, our CEO came to our board and said we’ve been in this building about 25 years and it’s at the end of its useful life. It had a roof leak and the air conditioning didn’t work,” Davis Buss said. “We looked at a building that was old and tired.”

The organization received a planning grant from the Heinz Endowments, a Pittsburgh-based philanthropic organization, and used it to fund work by architects and planners for the new facility. “As they did a deep dive into our programs, we learned that we needed changes,” Davis Buss said. “We needed new systems and we were turning away people, so we needed increased capacity. When we designed [the shelter] in the early 1990s, we didn’t realize how many children would end up in the shelter with their moms. We also could not have anticipated the enormous security issues that arose since then, primarily because of the introduction of the Internet.”

Davis Buss said the organization considered selling the building, but decided that zoning wars were likely if such a high-security property sought to be established elsewhere. “The thought of battling for zoning approval, along with knowing that our current location is great for staff and clients because of public transit, helped us decide to stay,” Davis Buss said.

Leaders ultimately settled on a plan that ended up as a $12.5 million development. The board of directors decided to go with a plan to raise money and Davis Buss, an attorney who works in tax-exempt financing, was familiar with NMTCs. “When it was time to put our resources together, we said ‘let’s find out about new markets tax credits,’ ” Davis Buss said. “It gave us a net benefit that was the largest single contribution to our financial stack. Without it, it would take years and years to raise the funds.”

Brad Elphick, a partner in Novogradac & Company LLP’s Atlanta office, and his team prepared the financial model for the transaction. He said the Women’s Center and Shelter shows why the NMTC program is so important. “This is the kind of organization that makes a huge difference in the community, but it’s always difficult to find the types of funding needed for the upgrades it needed,” Elphick said. “The NMTC subsidy made the difference between this being a dream and a reality.”

“There are quiet areas and there are areas for pets, because studies show that many women stay in dangerous situations because the domestic violence perpetrators will threaten pets,” said Davis Buss. “So we have a pet area.”

Rebecca Davidson-Wagner, president of Pittsburgh Urban Initiatives (PUI), which allocated $7.5 million in NMTCs to the upgrade, liked the plans. “I think it gives a greater sense of security, which is such a big issue for women’s shelters,” she said. “And they also have the element of pets. I’d never put two and two together, but pets become leverage to keep someone in a violent relationship. This makes it so that doesn’t become a barrier.”

Construction created some hurdles, since the residents remained on-site during that period. That meant that the contractor had to provide a list of every worker, so the residents could check and feel safe. But Davis Buss said it worked out.

“For me, the surprises are all good ones on how good it’s going and how close to budget we are,”
Davis Buss said.

“We are always proud to be able to play a role in assisting projects like this,” said PNC’s Gibson. “To do this in Pittsburgh, our hometown, is particularly rewarding.”

PUI was the first CDE to allocate credits. “It was wonderful that CCG wanted to be involved,” said Davison-Wagner. “They were able to add their allocation and that was a win for everyone.”

CCG’s Folmer said the development checked the desired boxes. “We generally look for something with a lot of community impact or that provides services to a low-income community,” Folmer said. “The majority of the clients at the Women’s Center and Shelter are minorities and have household incomes below the median.”

Folmer said the tax credit financing for the building allows other funding to go to programing. “To be able to keep funds for operating expenses and to help the mission is good,” she said.

PNC’s Gibson agreed. “This allowed the project to happen much sooner than it would have,” he said of tax credit equity.

Robert Rubinstein, executive director of the Urban Redevelopment Authority of Pittsburgh, the parent organization of PUI, said he was impressed with the ability of the Women’s Center and Shelter to work in a program that is often difficult for first-timers to understand.

“When you work with someone who isn’t used to new markets tax credits and it’s probably the first and only time they’ll do it, you expect hiccups, roadblocks and detours around the concept and unique requirements,” he said. “I would say it was surprising that it went as smoothly and quickly as it did. The organization itself is a world-class organization and what they do and the population they serve is so important. It was inspirational to all of us to play a small role in delivering what they wanted to do.”

The project is expected to support 25 full-time construction jobs and once completed, will add three new permanent employees and retain 47 current jobs. Economic estimates predict it will create 23 indirect jobs providing $1.1 million in additional wages.
“This is much more than a jobs story,” Gibson said. “It’s about expanding and deepening their comprehensive services and providing the ability to adapt in the future to the evolving needs of their clientele.”

And the tax credit equity was important. “[The NMTC equity] was critical,” Davis Buss said. “It represents about 20 percent of our capital stack and given the nature of how we raise funds, it was terrifically important.” 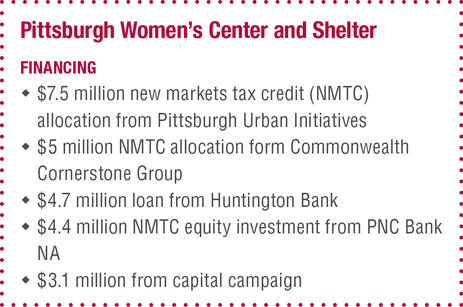