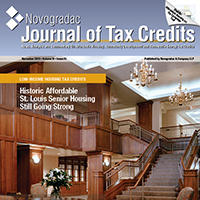 This is the time of year for forecasting and planning. And despite the uncertainty that surrounds the likely tax extenders package, there are some points to consider now so you can generate the maximum benefit from certain tax provisions widely expected to be extended. For tax credit investments, developers and project sponsors must negotiate with their investors now to ensure that if these expected tax extenders materialize and the investors receive the added benefits that will result, they will contribute additional capital into their investment partnerships.

In addition, there are known changes coming for the affordable housing community that will also require planning and advance action if developers and investors are to maximize the potential benefits available. Specifically, important steps taken now may preserve the ability for certain developments to qualify for the 30 percent boost in eligible basis that is associated with a development being located in a difficult development area (DDA).

Tax depreciation rules determine how quickly the cost of an investment in assets can be deducted. Bonus depreciation allows a fraction of the cost to be deducted immediately. For tax motivated investors, particularly LIHTC investors, this translates into higher after-tax rates of return. Novogradac & Company estimates that bonus depreciation can add an extra 0.5 to 1.5 cents per dollar of LIHTC, depending on several factors, including an investor’s desire for accelerated tax losses. And while bonus depreciation isn’t currently available, if it is extended as expected but developers haven’t made the necessary arrangements in partnership agreements, they could miss out on the potential benefits that would result.

Bonus depreciation is often discussed in connection with Section 179, another provision that allows the expensing of a limited dollar amount of investment. Because the expensing provision lowers the cost of capital for tangible property, supporters argue it will lead small businesses to invest in more equipment and create more jobs. Bonus depreciation and enhanced expensing allowances expired at the end of 2014.

At the time of this writing, the House of Representatives and Senate were still far apart on a plan for tax extenders. The legislation that has progressed so far still has a way to go in the reconciliation process, including their positions on bonus depreciation and enhanced expensing. The Senate Finance Committee passed Tax Relief Extension Act of 2015 (S. 1946) , which would among other things extend Code Sec. 179 expensing for two years and extend bonus depreciation for two years (one year retroactive and one year prospective). The House Ways and Means Committee passed H.R. 2510, a bill that would make 50-percent bonus depreciation permanent. A companion bill in the Senate, S. 1660, was introduced by Sen. Pat Roberts, R-Kan.

A key consideration that is raised each year when Congress considers tax extenders is cost. The Joint Committee on Taxation (JCT) has estimated that extending for two years the provisions in S. 1946 would reduce revenue by $97.1 billion between 2016 and 2025 (excluding macroeconomic effects). Looking at a longer timeline, the Congressional Budget Office (CBO) estimates that extending all tax provisions scheduled to expire before 2025 would reduce revenues by $897.9 billion. Because CBO’s projections reflect the cost of a long-term extension, they are significantly larger. CBO says that over the 2016 to 2025 budget window, extending bonus depreciation would cost $223.6 billion and extending Section 179 expensing would cost $60.8 billion.

While many in the business community support permanent status for these provisions, temporary extensions of one or two years at a time are far more likely at this time. For partnership planning purposes, the length of the next extension is less relevant than the need for developers and investors to negotiate how they will account for the likely availability of these provisions in their partnership agreements.

Another provision for which the timing of when the provisions are extended could play a key role for tax planning purposes is the tax credit under Section 45L.
S. 1946 includes a two-year extension of the $2,000 per dwelling unit Section 45L new energy-efficient home tax credit for eligible homes acquired by the end of 2016. Developers should be sure to address the potential treatment of such credits in their partnership agreements.

The Senate bill also included a two-year extension of the Section 179D deduction for energy-efficient commercial and multifamily buildings (generally buildings of 4 or more stories above grade), through the end of 2016. Depending on when an extenders bill passes, LIHTC properties could find themselves with excess basis that would allow them to take advantage of these provisions, as was the case when extenders passed in 2014 with two weeks left in the calendar year.

It’s also worth noting that a group of Senate Democrats released a national energy bill in September that would create a performance-based incentive under Section 179D for increased energy conservation in new commercial and multifamily buildings and for retrofits of commercial and multifamily buildings. Under that plan, buildings reaching minimum conservation thresholds would receive a small deduction, which increases for more efficient buildings. Non-taxed entities, including federal, state, local, and tribal governments, and non-profits, would be allowed to allocate deductions to the taxpayer primarily responsible for designing the efficiency improvements.

In addition to the tax extender saga, there are other changes on the horizon that will require planning by the affordable housing development community, namely, a coming change in the way DDAs are designated.

DDA is a designation for areas that have a relatively large gap between fair market rents (FMRs) and area median gross incomes. Affordable multifamily rental housing properties that are developed in these areas get an additional 30 percent boost in their eligible basis for determining low-income housing tax credits (LIHTC) under Internal Revenue Code Section 42, which generally translates to an additional 30 percent in LIHTC. Each year, HUD publishes a list of DDA designations in metropolitan and nonmetropolitan areas by county level, subject to a cap of no more than 20 percent of the nation’s population covered by a DDA.

While DDAs are subject to change annually, the designation changes in 2016 will be far more substantial than in prior years because HUD will use a new methodology for the metropolitan component of DDAs. The revised approach will use small area fair market rents (SAFMRs), rather than FMRs for metropolitan areas, while still adhering to the 20 percent national cap. The new DDA designations will be determined on a ZIP code basis instead of the current MSA or county basis. This new designation will be called Small Area Difficult Development Areas (SADDAs). In 2014 HUD estimated that 233 metro areas will have at least one ZIP code designated as an SADDA. This is compared to about 35 to 40 metro areas that are typically designated entirely as DDAs. This new change in designation will only apply to metropolitan areas; non-metropolitan areas will not be affected. HUD created a mapping tool that shows the hypothetical SADDAs in major metropolitan areas if the policy were in effect in 2015. The HUD SADDA mapping tool can be found online at www.huduser.org/sadda/sadda.html.

One of the most significant consequences of this chance is expected to be that many areas in California, Florida and New York will lose their DDA designation. Every MSA that is currently designated as a DDA will lose that status for at least part of the metro area. Some estimates suggest that DDA designations in California will be cut in half. As a result, affordable rental housing developers who had planned on the 30 percent boost in eligible basis will be at a loss. After the designations change, LIHTC allocating agencies have the option to provide that boost for 9 percent LIHTC developments outside SADDAs, but not for tax-exempt bond financed properties. And this is where planning will play a key role: to preserve access to that 30 percent basis boost, applications for tax-exempt bond financed developments in areas where the DDA designation will change, applicants will have to submit a “complete application” no later than Dec. 31, 2015. It’s important to note that many state agencies have earlier application deadlines that would require even more rapid action. Timing will be of the essence as sponsors of developments in these areas should work with agency staff to preserve this option.

These are just a few cases where close attention to timing and a dose of planning could make substantial differences in outcomes for developers and investors this year. As we continue to monitor these situations, Novogradac & Company will continue to keep the development community informed.