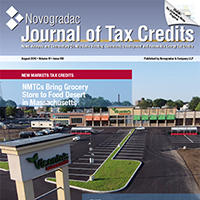 Over a remarkable period from late June to early July, there were two major fair housing policy developments, both long anticipated and awaited by the affordable housing community. Before I discuss them, however, let me first discuss two other lower-profile, but also important, developments in the realm of tax and spending issues.

The reports were released after two delays and reveal that group members were largely unable to agree on concrete recommendations for the most pressing tax reform issues. Instead, the reports focused primarily on the merits and policy considerations of many existing reform proposals.

Overall, the reports reinforce the idea that tax reform is not imminent. Despite months of work, the two parties are still deeply divided on key issues. The working groups did not make significant progress toward resolving many of the detailed technical questions underlying even the areas of agreement.

The Community Development and Infrastructure Working Group’s jurisdiction included the low-income housing tax credit (LIHTC), new markets tax credit (NMTC), historic tax credit (HTC), renewable energy tax credits (RETCs)–particularly the Section 45 production tax credit (PTC, used primarily for wind) and the Section 48 investment tax credit (ITC)–and tax-exempt private activity bonds, including multifamily housing bonds. The working group’s report, filed by its co-chairmen, Sens. Dean Heller, R-Nev., and Michael Bennet, D-Colo., includes descriptions of the tax credit and private activity bond programs, but does not offer options or recommendations for changes to them. The working group proposes no changes to most of the programs in its jurisdiction, saying, “Although our group was not able to reach bipartisan recommendations in each of these areas, we feel each of these parts should be heavily focused on as fundamental tax reform moves forward.”

In the near term, incremental progress on tax reform may be possible in very limited areas, particularly international tax reform. Broader efforts, such as business tax reform, appear very unlikely. Instead, it seems more likely that the Congress will shift focus to extending the 52 provisions that expired at the end of 2014. Only July 21, the Senate Finance Committee considered such a tax extenders bill, and this month’s Washington Wire goes into detail on the bill.

Appropriations Legislation
Shifting to the spending front, on June 25, the Senate Appropriations Committee approved its $55.7 billion fiscal year (FY) 2016 Transportation-HUD (THUD) spending bill, on a vote of 20-10, with support of all Committee Republicans and four Democrats–Sens. Barbara Mikulski, D-Md.; Dianne Feinstein, D-Calif.; Tammy Baldwin, D-Wis.; and Brian Schatz, D-Hawaii. The amount is about $1.9 billion more than the fiscal year (FY) 2015 enacted level, but $7 billion less than the FY 2016 request. The Obama administration’s request depended on Congress authorizing spending more than the budget caps set in the Budget Control Act (BCA) of 2011. However, the Republican FY 2016 budget resolution maintains these budget caps and the Senate Appropriations Committee drafted the bill to comply with the cap.

Senate THUD Appropriations Subcommittee Chairwoman Susan Collins, R-Maine, noted the difficulty in writing the FY 2016 THUD bill under the budget caps, and emphasized the priority of renewing rental and homeless assistance over other HUD programs in the bill. And because 84 percent of HUD’s budget goes to those priorities, the rest of the HUD’s budget got squeezed.

Most notably, the bill cuts the HOME Investment Partnerships Program from $900 million in FY 2015 to just $66 million, an $834 million (93 percent) cut. Given that HOME funding is allocated to about 650 participating jurisdictions–state and local governments–such a cut, if enacted, would render the program essentially unworkable. The House FY 2016 THUD bill provides $767 million in net appropriated funding and would also direct an estimated $133 million in funding from the Housing Trust Fund (HTF) to the HOME account. The Senate bill does not direct HTF funding to HOME or any other HUD account. The president’s FY 2016 request for HOME was $1.06 billion, including a $10 million set-aside for the Self-Help Homeownership Opportunities Program (SHOP). Further details on the bill are included on the Novogradac blog at novogradac.wordpress.com.

It is unclear if or when the full Senate will consider the FY 2016 THUD bill. Senate Democrats have threatened to filibuster the FY 2016 bills because they adhere to the Republican FY 2016 budget resolution and the BCA nondefense discretionary spending caps. Many Senate Democrats have urged the Republican leadership to consider legislation to increase the spending caps, similar to a deal that former House Budget Committee Chairman Paul Ryan, R-Wis. and former Senate Budget Committee Chairwoman Patty Murray, D-Wash., negotiated in 2013. However, the prospects for such a deal are uncertain as this column went to press.

Absent a deal to increase the budget caps, it appears very likely that the Congress will consider a stop-gap funding bill, a continuing resolution to funding the government at FY 2015 levels after the fiscal year ends Sept. 30. Final FY 2016 spending bills could also be combined with legislation to increase the federal debt ceiling, which the federal government is projected to meet sometime in November or December.

Fair Housing
Finally, turning back to the fair housing developments, it was a striking how they happened in relatively short order. First the U.S. Supreme Court on June 25 issued its long-anticipated opinion in the landmark case, The Inclusive Communities Project Inc. (ICP) v. Texas Department of Housing and Community Affairs (TDHCA), confirming decades of previous court decisions that “disparate impact”–i.e., liability for neutral policies and practices that have a unintended adverse effect on protected classes–is recognized by the Fair Housing Act (FHA). Given the focus of the underlying case on TDHCA’s LIHTC allocation policies, the LIHTC community was intently focused the outcome of the case. In light of the court’s decision on the Voting Rights Act and perceived critical stance toward disparate impact, this decision represented a modest surprise.

Three weeks later, on July 16, HUD announced its long-awaited final regulation implementing the FHA’s “affirmatively furthering fair housing” (AFFH) provisions. Even though both developments turned on largely settled law, the 47 year-old FHA, both were very significant for the nation’s affordable housing community, especially with respect to addressing the nation’s persistent patterns of racial segregation and poverty in housing. Together, they represent the most significant expansion of fair housing rights in many years.

It is still too early to tell what the long-term impact of these developments will be. The court “remanded,” or sent back, the ICP v. TDHCA case to the circuit court for further deliberation. And the AFFH final regulations will take years to implement, with many state and localities only beginning to submit plans in the 2020s. The blog at novogradac.wordpress.com has further details on the case and the regulations.

Indeed, both developments may end up being a tool for affordable housing developers to combat NIMBYism in higher-income communities. And that would be a welcome development.