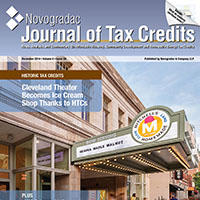 As noted in the Washington Wire, the 2014 midterm election swept Republicans into power in the Senate for the first time in eight years, giving them control over all of Congress in January. We can expect that President Barack Obama’s final two years in office and the actions his administration takes during that time will be under great scrutiny by a Republican Congress.

However, given the more challenging map that Senate Republicans face in 2016, when there are 24 Republicans and only 10 Democrats up for re-election, there will be an incentive for Senate Republicans to demonstrate they can govern and strike bipartisan deals to bring legislation to President Obama’s desk that he could sign. After the election, one of those potentially bipartisan issues that repeatedly comes up as a possible item on the 2015 agenda is tax reform. President Obama, House Speaker John Boehner, R-Ohio, and Senate Majority Leader Mitch McConnell, R-Ky., all noted tax reform as a priority in postelection press conferences.

Rep. Paul Ryan, R-Wis., the likely new House Ways and Means Committee chairman, and Sen. Orrin Hatch, R-Utah, the incoming Senate Finance Committee chairman, have reaffirmed tax reform as their top priority for 2015. Once again, to provide savings that can be used to reduce corporate tax rates all corporate tax expenditures will be at risk, including the low-income housing tax credit (LIHTC), the new markets tax credit (NMTC), the historic rehabilitation tax credit (HTC), and renewable energy tax credits (RETCs). The fact that Rep. Camp chose to preserve the LIHTC in his tax reform draft bill was a tremendous achievement and will make it easier to preserve going forward, but Rep. Ryan isn’t bound to abide by Camp’s draft.

It’s possible that the new Senate Republican majority will decide to use budget reconciliation to facilitate the passage of tax reform. Reconciliation is a procedural option that allows for legislation affecting spending and revenue to be enacted by a simple majority vote in the Senate while remaining filibuster-proof. If both the House and Senate pass the same fiscal year 2016 budget resolution, and that budget contains “reconciliation instructions” to the tax-writing committees, then the Senate can enact tax reform by a simple majority without the threat of a filibuster. Reconciliation has been used in the past to pass Welfare Reform, the 2001 and 2003 Bush tax cuts, and the Affordable Care Act.

Some readers may roll their eyes and say that tax reform just isn’t going to happen in the next two years. Admittedly, whether Congress decides to use reconciliation or not, it will still be very difficult for tax reform to pass next year. And if momentum isn’t sufficient in the second half of 2015, the presidential election will make it very difficult to get something as consequential as tax reform legislation enacted in 2016.

But the affordable housing, community development, historic preservation and renewable energy communities should still to take the threat of tax reform very seriously and continue get their members, especially those on the tax-writing committees, out to see the projects financed by these tax credits. As current Senate Finance Committee Chairman Ron Wyden, D-Ore., recently said, “tax reform is impossible, until it isn’t.”

HTC Faces Threat
Despite the distinction of being the first community development tax credit and a permanent part of the tax code that survived the last comprehensive rewrite of the code in 1986, the HTC is under threat. Perhaps because the HTC has flown under the radar as a quietly successful program for many years, the HTC community was not as primed for political engagement as some of the other community development tax credit communities. Furthermore, until recent Internal Revenue Service (IRS) guidance was released to address the concerns highlighted in the Historic Boardwalk Hall case, HTC investment had been impeded, and industry attention was divided.

Fortunately, once the guidance was released, and through the efforts of the Historic Tax Credit Coalition and the National Trust for Historic Preservation, among others, advocacy efforts ramped up. And with good reason, as Chairman Camp’s tax reform discussion draft proposes to eliminate the HTC.

Just as the LIHTC and NMTC communities rallied behind legislation as means of gaining Congressional support, so too can the preservation community through the Creating American Prosperity through Preservation (CAPP) Act. The CAPP Act was introduced as H.R. 5655 by Reps. Aaron Schock, R-Ill., Earl Blumenauer, D-Ore., Mike Kelly, R-Pa., and Ron Kind, D-Wis., in the House and S. 1141 by Sens. Ben Cardin, D-Md., Susan Collins, R-Maine, Chuck Schumer, D-N.Y., and Debbie Stabenow, D-Mich. As introduced, it would make a successful credit even better by targeting it to the rebuilding of America’s “Main Streets,” enabling more impactful state HTCs and encouraging more energy-efficient rehabilitation. The CAPP Act includes five important changes to the current federal HTC that will strengthen the HTC and its ability to create new investment and jobs:

Enable More “Main Street” Historic Preservation in Small Towns, Rural Areas
This provision increases the HTC from its current 20 to 30 percent for “small projects”—those with $5 million or less in qualified rehabilitation expenditures. This would help remove the current disincentive to develop small-scale buildings, which often provide affordable commercial space for small businesses and upper-floor housing in small towns and rural areas.

Remove Federal Taxation of State HTCs
Thirty-six states have enacted state historic tax credits to encourage the development of historic properties, which, when combined with the federal HTCs, create a powerful economic tool, as documented by many economic studies. However, federal taxation of state credits severely diminishes the full investment potential of state HTCs, which can often determine whether a project is financially feasible. This provision would remove federal taxation of state HTCs.

Increase Energy-Efficient Rehabilitation
This provision would increase both the 10 and 20 percent credits by 2 percentage points, if the rehabilitation is successful in increasing the building’s energy efficiency by 30 percent or more. This increase will provide an incentive to install energy-efficient systems and materials during the rehabilitation of a historic or older building.

Update, Broaden Number of Eligible Properties
In the Tax Reform Act of 1986, Congress provided that any building built before 1936 was eligible for the 10 percent rehabilitation tax credit. Despite the intention to do so, Congress did not index the date. This arbitrary date eliminates the eligibility of properties built after World War II that need rehabilitation and can serve as new commercial and community uses. This provision would simply strike the 1986 date and define an older building as one that is built at least 50 years ago.

Facilitate High-Impact Rehabilitation by Nonprofits, Local Governments
Current law discourages nonprofits and government agencies from sponsoring the rehabilitation or leasing of historic properties. Nonprofits and local governments typically undertake the most difficult projects in areas of greatest need and encourage the reuse of older buildings for employment and community health centers, school and affordable housing. This provision would modify section 47(c) to limit the definition of a “disqualified lease” to those leases that are part of a sale leaseback. The other types of disqualified leases that inhibit the rehabilitation of these buildings–those with purchase options, leases in excess of 20 years and leases in buildings that use tax-­‐exempt financing–would be eliminated.

Prospects for Passage
While the legislation will not be considered during the lame duck session, an effort to gain cosponsors, especially members who have cosponsored previous iterations of the CAPP Act, will help prepare the ground for 2015 and beyond as tax reform remains a part of the congressional agenda.