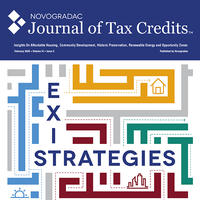 There is plenty of concern about the Community Reinvestment Act (CRA) regulations proposed Jan. 9 by the Office of the Comptroller of the Currency (OCC) and the Federal Deposit Insurance Corporation (FDIC), starting with the “single-metric test.”

“The test would aggregate the dollar volume of all of a bank’s CRA activities on its balance sheet and divide that by the bank’s domestic retail deposits,” said Buzz Roberts, president and CEO of the National Association of Affordable Housing Lenders (NAAHL).

The measure would be the predominant basis for a bank’s CRA rating.

“I would say if it were only one of many components in a rating, then it would be less troubling, but the basic structure is fundamentally problematic,” Roberts said. “For example, to have a static dollar-volume target over the course of an economic cycle is not going to work.”

The proposed change in measuring CRA compliance is a dramatic alteration of the decades-long method and drew criticism from those in affordable housing and community development. Proposed CRA regulation changes were the topic of a panel at the Novogradac 2020 RAD Public Housing Conference in Fort Lauderdale, Fla., in early January, where Roberts and Gerron Levi of the National Community Reinvestment Coalition shared their thoughts. Following the conference, Roberts expanded on his thoughts.

Roberts explained why the single-metric approach–a mathematical formula to determine CRA compliance–represents a step back from the current CRA rating system that separately considers a bank’s loans, investments and services.

“It’s like going to a restaurant, ordering a meal, having your meal show up, then they take that entire meal and throw it into a blender and give you a glass to drink,” he said. “It’s not going to be the same experience.”

The Community Reinvestment Act of 1977 was enacted to encourage banks to meet the credit needs in the communities in which they are chartered–including low- and moderate-income neighborhoods. The OCC, the FDIC and the Federal Reserve act as regulators of CRA statute and had done it collectively, with their last major revision to the regulations made in 1995.

When the OCC and FDIC released 239 pages of proposed regulations, the biggest splash was a proposal to eliminate the longstanding investment and service tests in favor of a system that divides the dollar volume of CRA activity on a bank’s balance sheet by the bank’s domestic deposits.

“I think it’s fundamentally flawed,” said Roberts. “In [NAAHL’s] comments [to the August 2018 advance notice of proposed rulemaking], we discussed several reasons why it’s problematic and part of it is that it combines so many activities that really shouldn’t be combined and focuses predominantly on balance-sheet activity, rather than origination activity.”

Roberts was far from alone in that reaction. The preamble to the proposed regulations acknowledged that most of the 1,500-plus comments on an advanced notice of proposed rulemaking expressed concerns and objections to the single-metric system.

The proposed transition to a single-metric approach could have significant implications for affordable housing and community development investments.

“Without the motivation of a separate investment test, it’s very likely that financial institutions default to other CRA-eligible activities that have shorter durations and are simpler to execute,” said Levi at the conference.

“We have a number of concerns about this approach,” said Levi. “The incentive of the CRA is very, very important. This doesn’t create the right incentive. The metric is too determinate. It favors large and easy deals over complex and innovative ones. It favors the quantity of bank activities over quality and impact. The problem with this approach, where you’re adding up the dollar values into a single metric, is that it really undermines the bank’s performance in each of those areas … we think this undermines the need to do a lot of community building, particularly when you consider the expanded list of what qualifies and definitions in the rule.”

“It will appear like they’re doing more, but in our view, it will be a lot of work that is less impactful,” said Levi. “This takes the historic focus of CRA off of LMI.”

“You might think 2 percent is a pretty big number because there are $13 trillion in domestic deposits in banks,” said Roberts. However, Roberts said the actual percentage of investment in community development may be closer to 1 percent because a broader array of activity counts as community development under the proposed regulations and much of the 2 percent will be in activity that would qualify for the double multiplier.

There are a couple of wrinkles. One is that the OCC and FDIC are looking at activity on a bank’s balance sheet, which include not just loans and investments in the past year, but those in previous years still on balance sheet.

Roberts explained that the balance sheet approach could mean that an investment total could be spread over five years and include many activities that are multiplied by two. In essence, instead of $260 billion, the real target would be closer to $26 billion. For context, the annual low-income housing tax credit (LIHTC) equity investment market is about $13 billion. Add to that the fact that many “community development activities” qualify and banks could discover they can meet the required volume with significant less focus on traditional CRA-motivated investments.

“We don’t really know how this will play out and it may differ among banks, among communities and over time,” Roberts said. “I don’t think tax credit investments will go away, but there could well be a pricing effect.”

The proposed regulations include changes to the geographical areas in which banks must make their investments, shifting the focus to the locations of deposits.

“This is a positive suggestion that OCC and FDIC made, to look at where those depositors come from,” Roberts said. “Under the current structure, a bank assigns deposits that don’t come through a particular branch to some deposit facility and that creates a distorted picture.”

“I do think they have addressed some CRA hotspots but they may be making others even hotter,” Roberts said. “I think they are less likely to be successful in addressing the CRA deserts. Many rural areas may be CRA deserts, but they’re not generating significant deposits for banks and the proposal offers little real motivation for banks to reach the deserts.”

In addition to possibly making tax-credit investing less important, some are concerned that the proposed regulations would reduce financing options for smaller nonprofits to build and preserve housing with deep affordability. Similarly, there may be fewer small loans and small transactions.

Banks could fail the exam in nearly half of their local communities under the proposed framework and still pass.

“The denominator in this metric relies on a new definition of deposit data that isn’t currently collected so there’s a lot we don’t know,” said Levi. “There’s lots of stuff competing for this finite base.”

There will be a two-year transition period.

Roberts said he does not expect banks to abandon LIHTC investment entirely, but that competition for credits may be affected. “Competition among banks to do tax credit deals has been pretty intense,” said Roberts. “I think that’s going to diminish.”

Differences with the Federal Reserve

Lael Brainard, a member of the board of governors at the Fed that leads their CRA oversight, made a speech the day before the OCC and FDIC proposal was published. In it, she suggested that the Fed preferred a more tempered approach to reform.

Roberts said the Federal Reserve’s approach would keep a much sharper focus on affordable housing and community development–but acknowledged that the influence of the Fed is tempered. Most LIHTC and NMTC investment comes from banks overseen by the OCC.

Comments on the proposed regulations are due March 9 and the OCC is expected to release a final rule in May.

“I think it would be important [for commenters] to talk about how this structure would affect their work,” Roberts said. “Not just the equity side, but the lending side too. It’s crucial, though, for stakeholders to comment on this proposal, since it will have such an impact.”