Q&A: Seller or Buyer, Who Gets Stuck with the Recapture? 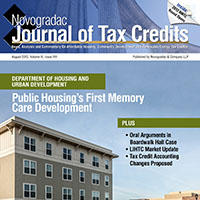 Question: If a low-income housing tax credit (LIHTC) building (or an interest therein) is sold, and there is a subsequent reduction in the qualified basis of said building during the 15-year compliance period, who is subject to LIHTC recapture, the seller or buyer?

Answer: The entity that received the accelerated one-third LIHTC would report the LIHTC recapture on their tax return. In some fact patterns both the seller and buyer would have LIHTC recapture depending on the year of sale and what year of the 15-year compliance period the decrease in qualified basis occurred.

For example, assume Building X, a qualified low-income building, is owned by Seller Sam. Sam has taken Building X’s LIHTCs for years one through six. On January 1 of year seven, Sam sells Building X to Buyer Bob, who proceeds to operate Building X as a qualified low-income building for years seven and eight. However, during year nine, Bob causes a decrease in qualified basis to Building X that is not remedied by the end of the year. In this scenario, both Sam and Bob would have LIHTC recapture on the accelerated one-third LIHTC that they each reported on their tax returns. Remember, the LIHTC program is unique in that the LIHTC is taken over 10 years (the credit period) but earned over 15 years (the compliance period).

Recently, the IRS issued guidance (Revenue Procedure 2012-27) on how to notify the IRS of a reduction in qualified basis subsequent to a building disposition (see July 2012’s Q&A: Notifying the IRS of a Qualified Basis Reduction Subsequent to Building Disposition) to begin the 3-year statutory period. The Revenue Procedure requires the taxpayer to submit a letter to the IRS containing, among other things, “the name, address, and taxpayer identification number to the extent known of any person(s) to whom the increase in tax under IRC §42(j)(6)(B) applies as a result of reduction in the qualified basis of any building to which the taxpayer’s disposition relates.” This appears to be the only formal IRS guidance on notifying the IRS of a seller’s LIHTC recapture.

The second question is how does the buyer notify the seller of the reduction in qualified basis and who is going to pay for it. As with any contractual purchase and sale agreement, the answer lies within the documents that were signed by the buyer and seller. Generally, contract language will hold the buyer responsible for any tax credit noncompliance after the sale while the seller retains liability for any tax credit noncompliance issues prior to the sale.

In short, just because the seller is out of the deal does not mean they are free from LIHTC recapture during the compliance period.

May 4, 2021: What CDEs and Qualified Businesses Should Be Doing Now to Prepare for the Next NMTC Application Round
Posted on May 4, 2021
April 27, 2021: Maximizing the Benefit of State and Local Tax Incentives and Exclusions for Renewable Energy Properties
Posted on April 27, 2021
April 20: 2021: Understanding Provisions of the Affordable Housing Credit Improvement Act of 2021
Posted on April 20, 2021
END_OF_DOCUMENT_TOKEN_TO_BE_REPLACED