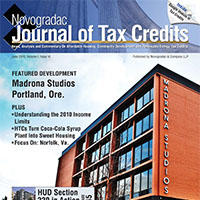 Question: Are payments received by taxpayers under section 1603 of the American Recovery and Reinvestment Act of 2009 includible in gross income for state income tax purposes?

Answer: For property located in California, cash grant payments under Section 1603 are excluded from California gross income; however that may not be the case in every state.

Background
Taxpayers who own property eligible for tax credits under sections 45 and 48 of the Internal Revenue Code (IRC) may elect to forego claiming tax credits and instead apply to the United States Department of the Treasury (Treasury) for a cash payment. To do so, taxpayers must place eligible property in service during 2009 and 2010. Property placed in service after 2010 may also be eligible so long as construction began after 2008 and prior to 2011 provided, however, that more than 5 percent of the total cost of eligible property has been incurred, and must be originally placed in service prior its respective credit termination date (i.e. January 1, 2013 for large wind, and January 1, 2017 for solar photovoltaic).

Taxpayers that elect to forego claiming tax credits and instead receive Section 1603 cash grants exclude these payments from federal gross income pursuant to IRC section 48(d)(3). As such, the Section 1603 payments are reported as tax-exempt income on their income tax return. This exclusion helps to ensure that the Section 1603 grant is, in many ways, equal in value to the Section 48 investment tax credit (ITC) for federal income tax purposes. However for state income tax purposes the answer isn’t always so clear. In structuring renewable energy transactions it is important to understand the true value that Section 1603 grants have to the investors being allocated these payments. It is worth noting that the production tax credits (PTCs) and ITCs are not included in federal or state gross income. Instead they are used to reduce the tax liability of the investors.

Issue
The issue is whether or not Section 1603 grant payments are excluded from gross income in the state(s) in which you are subject to tax. State tax laws and regulations can vary considerably. For example, some state and local jurisdictions automatically conform to the IRC (i.e. the District of Columbia) while others do not (i.e. Ohio). In this case, if the state(s) in which you are subject to tax conform automatically to the IRC, you are in luck. The problem is most states do not conform automatically. Although many states eventually conform, the time it takes them to do so can vary, which creates uncertainty when structuring transactions. Ultimately the risk is that particular state(s) do not conform, which stymies investment or makes payment reporting difficult because it is unclear, based on the available guidance, how to report the payments. Below is a brief comparison of the equity raised on two wind projects of the same size but in different states, one in California and the other in Ohio. Current guidance in Ohio is ambiguous enough to the extent that one could conclude that Section 1603 grants are subject to the Ohio Commercial Activity Tax (CAT), which is calculated at .26 percent of taxable gross receipts.

As you can see from the above example it literally pays to develop in particular states with favorable tax treatment of Section 1603 grant payments. Depending on how you interpret it, Ohio’s guidance available via Tax Information Release No. CAT 2005-17 could have a significant impact. A similar degree of ambiguity exists in other states. However, California recently passed Senate Bill 401 which clearly states that Section 1603 grant payments shall be excluded from gross income. Hopefully other states will soon follow, by explicitly conforming to the IRC, including the exclusion provided for in 48(d)(3), or by issuing guidance clarifying that Section 1603 grant payments are excluded from gross income.

To learn more on how Section 1603 grant payments are subject to taxation in the various states, please contact Tony Grappone at 617-330-1920 extension 114.