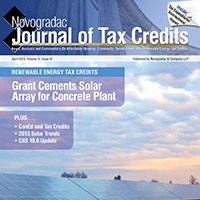 Question: How much of the purchase price of a 100 percent membership interest in a solar project company (i.e., the underlying project assets) should be considered eligible for the energy investment tax credit (ITC) under Internal Revenue Code Section 48 or a Section 1603 grant payment (if chosen in lieu of the ITC)?

Answer: Generally, it depends on the characteristics of the underlying assets of the project company. As explained below the answer to this question can be very subjective. Hence, practitioners have differing viewpoints.

Background: Financial and accounting practitioners in the renewable energy industry are increasingly seeing developers of distributed generation and utility-scale solar projects get bought out of existing transactions. The buyout can happen prior to construction, during construction or at the commercial operation date. There are myriad reasons that the original developer might exit the transaction, but typically, the buyer is much better capitalized than the original developer and has the skillset to execute the physical development and/or the ultimate financing of the project (solar facility).

In most situations, under what is commonly known as a membership interest purchase agreement (MIPA), the buyer purchases 100 percent of the limited liability company membership interests in a special purpose entity (project company) that owns the project assets and related entitlements associated with the solar facility under development. At the time of purchase, the project company often does not own any physical assets as construction has not yet commenced; however, the project company does usually have an executed power purchase agreement (PPA), an executed site (ground) lease as applicable, an interconnection agreement and all other necessary permits required to commence construction of the solar facility. The original developer may have also negotiated a draft engineering and procurement contract and incurred various other costs in connection with getting the project “shovel ready.”

In determining how much of a buyer’s purchase price is eligible for the Section 48 ITC or a Section 1603 grant, one must generally analyze the underlying assets of the project company.

Energy Property - General Rules of IRC Section 48
As stated above, a buyer will generally purchase a project company for a stated amount of money and pay the previous developer for all rights, title and interest in all of the development assets and development rights associated with the solar facility. The determination of how much of the purchase price of the solar facility should be considered eligible for the ITC or a Section 1603 grant payment depends on how much of the purchase price is allocated to assets that constitute eligible “energy property.”

In general, IRC Section 48 defines “energy property” as any property that is equipment that uses solar energy to generate electricity but only with respect to periods ending before Jan. 1, 2017. To be eligible the property must be the actual solar equipment or tangible other property that is used as an integral part of furnishing electrical energy (see Treasury Regulation Section 1.48-1(a)).

Tax Analysis of the Purchase
When a buyer purchases a solar project by acquiring a 100 percent membership interest in a project company from the previous developer, the buyer is deemed to have acquired the assets of the project company. (See Revenue Ruling 99-5.)

As discussed above, the assets acquired by the buyer will usually consist of various predevelopment costs incurred in addition to certain contracts/agreements (development rights) entered into by the previous developer on behalf of the solar facility. Because the project company was 100 percent owned by the previous developer and is 100 percent owned by the buyer after the acquisition it is considered a disregarded entity for tax purposes. Thus, the acquisition of a membership interest will not be considered a transfer of a partnership interest for tax purposes. Thus, an allocation of the purchase price among the assets acquired is warranted.

Allocation of the Purchase Price Among the Assets Acquired
In determining which assets are eligible for the ITC and which are not, a buyer will prepare a schedule that allocates the purchase price among the acquired assets. The assets are generally grouped into eligible and ineligible hard and soft development costs, intangible assets and other costs.

One approach that appears to be getting traction is where the ineligible intangible assets are identified and ascribed a value. Currently, most practitioners would include site leases and power purchase agreements (PPAs) (to be discussed further below) in this category. That said, other costs could potentially fall into this category (costs related to electricity transmission, prepaid operation and maintenance (O&M) agreements, etc.). Taxpayers may want to consider engaging an appraiser to determine the value of these various ineligible intangible assets.

Once the ineligible intangible assets have been identified, the remaining underlying assets acquired are generally analyzed to determine whether or not they constitute eligible energy property. Because the solar facility in this example hasn’t been placed in service for tax purposes, these costs are generally considered “construction-in-process.” To the extent the purchase price of these construction-in-process assets exceeds the cost incurred by the developer most practitioners will generally allocate the excess ratably across the construction-in-process assets. Note that a portion of the purchase price has already been allocated to the ineligible intangible assets as described above.

What follows is a discussion regarding the tax treatment of two common ineligible intangible assets: site leases and PPAs.

Predevelopment Assets and Development Rights
For tax purposes, many practitioners would argue that most soft predevelopment assets and development rights acquired by the buyer should generally be considered indirect costs of developing (producing) the solar facility. Absent statutory authority to the contrary, an argument can be made that pre-development assets and development rights acquired by the buyer directly benefit or will be incurred for the express purpose of developing the project. As such, it could be argued these assets should constitute indirect costs of development that should be capitalized to the cost of the solar facility (as construction-in-process) and constitute “energy property” eligible for the ITC.

Power Purchase Agreements
There has been much debate regarding whether the value of a PPA should be eligible for the ITC. Before the IRS issued a recent private letter ruling (PLR) (to be discussed below) there were several schools of thought on the tax treatment for this item:

Now that PLR 201214007 has been revoked, the IRS has left it up to practitioners to determine whether the value ascribed to a PPA should be considered eligible or ineligible. Currently, many practitioners have concluded that a buyer must determine and ascribe a value to the PPA when acquiring a project company or project assets. Conceptually, the value ascribed to a PPA would likely be equal to the cost a buyer would incur in procuring an identical PPA with the same or similar offtake. The opportunity cost of time, the “above market” element of a PPA, and the actual cost of procuring an agreement in addition to other costs that would likely be incurred should be factored into determining the value. Conservatively, many practitioners have concluded that none of the cost allocated to the value of the PPA should be eligible for the ITC Section 1603 grant. As such, the cost would be considered an intangible asset that would be amortized over the term of the PPA or over 15 years depending on the approach.

Conclusion
Buyers of a project company that owns the project assets and related entitlements associated with a solar facility under development will generally need to undertake a purchase price allocation. The facts and circumstances of each situation are always unique and the approaches to this exercise can be very subjective. The purpose of this discussion is to give readers some background information and some current thoughts and developments on this question. As with any technical area where the answers can vary one should consult their tax adviser with respect to the issues addressed herein.

May 4, 2021: What CDEs and Qualified Businesses Should Be Doing Now to Prepare for the Next NMTC Application Round
Posted on May 4, 2021
April 27, 2021: Maximizing the Benefit of State and Local Tax Incentives and Exclusions for Renewable Energy Properties
Posted on April 27, 2021
April 20: 2021: Understanding Provisions of the Affordable Housing Credit Improvement Act of 2021
Posted on April 20, 2021
END_OF_DOCUMENT_TOKEN_TO_BE_REPLACED