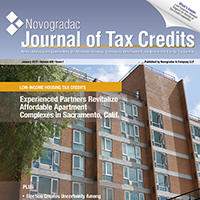 The largest allocation in the history of the New Markets Tax Credit (NMTC) program came with a secondary mission: Promote success.

“Obviously at this moment in time, we have to be sure to put our best foot forward and show the great things we’ve done,” said Bob Rapoza, founder and president of Rapoza Associates and spokesman for the New Markets Tax Credit Coalition, an industry advocacy group. “We have 13 rounds of credits going to communities and a lot of successful projects. Having the largest allocation ever gives us a chance to highlight that in a dramatic way.”

The previous 12 rounds featured an average of 75 allocatees and an average allocation of $3.6 billion.

“I think people have reacted well,” said Annie Donovan, director of the CDFI Fund. “We made 120 awards in this round, so there’s good reason for lots of people to feel excited about it.”

The awards came nine days after the election that swept Donald Trump and a Republican Congress into office, leading to the likelihood of substantial tax reform. Rapoza said the NMTC community is working hard to be sure the credit remains safe. “We have to educate both the people with President-elect Trump and people in Congress on what the credit does,” Rapoza said.

That task will combine with technical matters and the practical job of providing the NMTCs to deserving qualified active low-income community businesses (QALICBs) in the coming weeks and months.

The size of the allocation, both in terms of dollars and CDEs, was significant. “This will have a big impact on communities and put us in a good position to argue for a long-term solution,” Rapoza said. “The biggest [impact] is the size, but the second is how so much money went to rural areas. ... If our goal was to improve local economies in distressed communities, we did that.”

Of course, the number of allocatees drew attention. “I think there are probably 150 CDEs that can skillfully take the credits and pour them into communities to do a good job with everything from day care to industrial facilities,” Rapoza said. “In a typical round, 50 of them get left behind. This time, it was better to … get more organizations involved.”

Those CDEs were happy with the result. “Of course, we’re delighted,” said Charlie Spies, CEO of CEI Capital Management (CCML), a Maine-based CDE that received an $80 million allocation and focuses 80 percent of its portfolio on rural development and underserved states. “You’re never sure if you’re going to get [an award].”

“It was generally pretty close to what we expected to see–around 120 awards,” said Boes. “The average size might not have been in the range we expected. We thought some of the bigger organizations might get closer to $125 million. It looks like [the CDFI Fund] decided to increase the size of awards to smaller CDEs instead.”

Brad Elphick, a partner in Novogradac & Company LLP’s Atlanta office, agreed. “I think it shows the desire to spread out the allocation,” Elphick said. “Keeping the higher level at $80 million or $90 million probably gave bigger allocations to those at the lower end. They maybe got $40 million instead of $20 million.”

Donovan said the allocation process wasn’t significantly different from previous years, despite the magnitude. “The only thing different was the total number of awards allocated,” Donovan said. She pointed out that the CDFI Fund followed the process for the awards that was spelled out in the notice of allocation authority.

With tax reform coming and the Republican House blueprint on tax reform mum on the NMTC, practitioners recognize the need to highlight success.

Boes said the political climate increases the significance of the NMTC program. “There’s a lot of pressure, not only to show the success of the program, but in a way that the Republican side of the aisle wants to see it–job creation and helping the economy,” he said. “We have to do a better job of telling the story about job creation and return on investment.”

Elphick said there is always pressure. “When you’re involved in a program that’s not made an indefinite part of the Internal Revenue Code and you want to encourage Congress to either make it permanent or give it a longer extension, there’s always a little pressure on the participants to show success,” he said.

Elphick pointed out that the size of the allocation means this is an opportunity for the industry to show what it could do with an increased annual amount. “The industry is always saying we’d like more allocation and this is a chance to show what we can do with an increased amount in a year’s time,” he said. “We can prove the need to expand the program.”

The CDFI Fund’s Donovan is optimistic. “We continue to experience real bipartisan support for [the NMTC program],” Donovan said. “The program isn’t partisan and neither is poverty. I think it’s certainly a tool that’s proven to be effective. The fact that we are able to make more awards is good. I’m confident the market will demonstrate an ability to absorb more allocation.”

Spies said it was business as usual for CCML.  “I would love to see [the NMTC made] permanent,” said Spies. “We’ve been doing this for 12 years and I don’t think the approach has changed at all. If you’re a successful allocatee, you always need to perform as you said you will in the application and deploy and support and build a track record to reapply.”

“We’re going into the deep underwriting phase for our first projects that can close in the first quarter of 2017,” said Spies. “Those that will create significant jobs in rural areas are going full steam ahead.”

Spies said CCML begins working with companies as early as three years before allocation. “We have a pretty good idea of what companies are ready to go,” Spies said. “There’s still a significant amount of underwriting. We have to get focused on specific projects that are ready to go.”

Boes said CDEs will likely work through the administration side of deploying their awards in the coming weeks. “Given the holidays and the timing, there isn’t much potential to close deals before the end of 2016,” Boes said. “I see things really picking up in January.”

At the CDFI Fund, there is plenty to do. “We are working on two fronts,” Donovan said. “One is to get all the allocation agreements out so people can close deals. We’re also working on the next round.”

Elphick said CDEs always want to deploy as much of their allocation as possible before applying for the next round, since the CDFI Fund looks at that information in making awards. “I think we’ll see a very strong 2017 with a lot of momentum starting in the first quarter and continuing for the rest of the year,” he said.

Donovan said the CDFI Fund expects to have the round open sometime in the first quarter of 2017. As the practical nature of doing business continues, there is optimism about the impact the $7 billion allocation will have. “We’re really excited to see what people will do,” Donovan said. “We’re optimistic about what’s going to happen.”

The 13th round is roundly considered important.

“I think the importance of this round is that it adds to the success story,” Rapoza said. “We couldn’t have been able to advocate for a five-year extension or to combine the rounds if not for a sense on the part of the decision-makers that this is a successful credit and increasing the scale is fully justified.”