A series of historic brownstone apartments in the South End of Boston will be preserved and rehabilitated by the same developer that renovated it 42 years ago.

Inquilinos Boricuas en Acción (IBA) will rehabilitate and preserve the West Newton and Rutland Street Apartments in partnership with the Boston Housing Authority (BHA). The 146-apartment community was constructed in the late 1800s and became public housing in 1977 when IBA handled the transition after BHA acquired the property.

“We inherited the property to keep it low-income at the time,” said Kate Bennett, senior deputy administrator at BHA. “The intent was always to transfer it to a private owner as affordable housing. It took longer than anyone imagined.”

The development includes equity from low-income housing tax credits (LIHTCs) as the property is renovated through the U.S. Department of Housing and Urban Development’s (HUD’s) Rental Assistance Demonstration (RAD) program. Historic tax credit (HTC) equity also plays a crucial role as the property is renovated over the next year, with ownership transferring from BHA to IBA.

This is the first RAD development to close for BHA, which has about 10,000 affordable housing units.

The reunion of BHA and IBA comes more than four decades after they first worked together.

IBA was founded in 1968 when the Boston Puerto Rican community organized to create a developer dedicated to revitalizing the South End, preserving affordable housing in the face of gentrification and providing neighborhood services. In 1977, IBA worked with BHA to renovate the West Newton and Rutland Street buildings, turning them over to the housing authority while operating adjacent housing.

“In 2015, BHA decided they wanted a private developer and we jumped in immediately,” said Dr. Vanessa Calderón-Rosado, CEO at IBA. “We are committed to affordable housing and saw this opportunity as a way to avoid the displacement of current residents and to upgrade the property. For that and so many reasons, we thought we were a good fit.”

Calderón-Rosado said that the complex was attractive.

“It was a long-term desire,” she said. “I have been at IBA for 16 years and from the beginning, we wished for an opportunity to be a partner with BHA. We saw some buildings in the property that were experiencing issues. Three buildings were boarded off after a fire, because BHA didn’t have the resources to bring them back online. That brought blight to the neighborhood, which isn’t the message you want to send to residents. For many years, I talked to BHA and the opportunity finally came.”

It wasn’t a slam-dunk.

Image: Courtesy of Inquilinos Boricuas en Acción
Among the changes coming to the West Newton Apartments in Boston will be a historic renovation of the front doors. The apartments are being rehabilitated and preserved with low-income housing tax credit and historic tax credit equity.

“When the opportunity arrived to preserve the property, we competed with two large local developers,” Calderón-Rosado said. “We always thought that aside from our financial strength, our expertise and experience in the neighborhood were important. We felt that as original developers of affordable housing in the 1970s, we were a good fit. Some of our residents were already engaged in the planning. We felt this was the right thing to happen.”

“IBA has a robust community services program that our residents can avail themselves of,” Bennett said. “They present an array of residential services, for elders, families, mental health and more. That breaks the sense of isolation and puts [residents] in healthier places. I think it’s an absolutely perfect fit. They’re a local nonprofit whose mission is to serve folks in the South End community. They’re already serving low-income communities. They already know a lot of our families. They’re a mission-driven organization that fits in with what we do.”

“This is basically one whole block of brownstones,” said Jennifer Crampton, senior vice president at Wells Fargo, the sole tax credit investor for the LIHTCs and state and federal HTCs. “It’s unusual in affordable housing to be able to preserve units at this quality and volume in a neighborhood where condos are selling for $1 million to $2 million around the corner.”

“They’ll have essentially completely new units,” Bennet said. “Most of them are getting new kitchens and bathrooms, if they haven’t already been updated. There will be new windows and systems. The institutional doors will be replaced with beautiful, historic wood-framed doors. The condition of the property for the residents will immediately feel better and that will lead to a sense of pride of place.”

Some of the improvements will be less obvious on the outside.

“Another thing for residents is some significant upgrades to operating elements of the buildings,” Crampton said. “The mechanicals, plumbing, electrical and HVAC behind-the-scenes things that will enable the asset to function well over the long term are in the scope of work.”

The combination of the RAD program and the HTCs created some opportunities.

Calderón-Rosado said the HTCs were an obvious choice because the historic restrictions applied to the building whether or not the credits were used.

“Because the buildings are in a historic landmark district, anything would have had to be approved by the Landmarks Commission,” Calderón-Rosado said. “It makes sense to access the historic tax credits to secure funding. I wouldn’t call (HTCs) mandatory, but they were necessary. The financing for these projects are quite complex.”

“The challenge and most interesting part of the work on this transaction was to layer the various pieces of financing from both the structuring/legal and tax perspectives,” Crampton said. “The acquisition, ground lease financing, three types of tax credits, bringing these complicated resources together is a credit to the team of professionals assembled to execute this important transaction.”

Massachusetts Department of Housing and Community Development allocated LIHTCs, resulting in $23 million in equity from Wells Fargo, which added another $7 million in federal HTC equity and $4.9 million in state HTC equity.

MassHousing provided a $7.7 million construction and permanent loan. There was a $3.9 million sponsor contribution and nearly $1 million in deferred developer fee.

Partners in the transaction highlighted the fact that HUD approved the RAD transaction during the early-2019 government shutdown.

“One of the things that made this significant was trying to get it done in the middle of a government shutdown,” said Chrystal Kornegay, executive director of MassHousing. “Kudos to HUD Washington that they considered certain employees as necessary to them. A lot of transactions took longer than this.”

“It was really surprising,” Crampton said. “People came back from furlough to work on this deal. We saw other transactions grind to a halt, but somehow between all the powers involved, this got done.”

Crampton said the transaction has a special place for her.

“From a personal perspective, I love to work in my own city with nonprofit partners preserving housing at risk of being lost to market rate,” Crampton said. “The additional element of restoring historic significance and beauty brings the appeal to another level.”

IBA took over the property Jan. 31 and renovation began in February. Work will continue until late winter or early spring 2021 as residents are relocated three or four buildings at a time–moving into other affordable housing within 2 miles for 12 weeks.

Calderón-Rosado said residents have already complimented IBA on its management of the property.

“We want to increase their quality of life,” Calderón-Rosado said. “I believe when they come back, they’ll be even more pleased. There will be improvements to everything.” 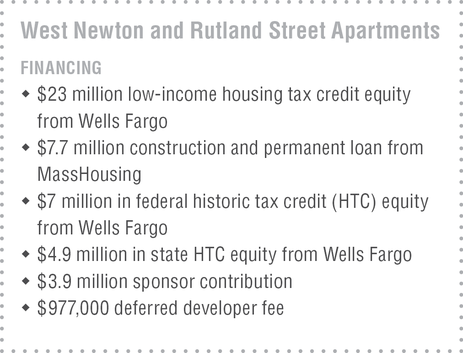