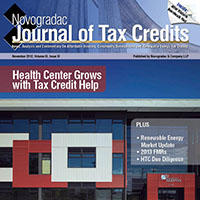 As it begins to feel the effects of the Section 1603 program’s expiration, the renewable energy tax equity market is at a critical juncture. Although the grant program expired last December, most developers lined up Section 1603 deals to see them through the better part of this year and delayed the return to traditional tax credits. “That’s going to shift right now,” said Dirk Michels, partner at K&L Gates. While there may not be as many investors in the renewables space as there were during the pre-recession economic boom, experts report that both the market and the technology have matured and are continuing to attract significant investment despite the end of the grant program.

A Market in Transition
In the absence of the grant, the growing segmentation of the renewable energy tax equity market has come into focus. Beyond the basic project types of solar, wind, biomass and geothermal, the submarkets of these four mainstream renewable energy technologies have become clearer as the overall clean energy market matures. Some industry participants divide the solar market into the three areas: utility-scale, distributed generation and residential. Others go even further and separate distributed generation deals into utility-scale and non-utility scale.

Solar projects, in both the residential and commercial spaces, are attracting the most tax equity and experts expect this trend to continue into next year as developers wrap up their Section 1603 wind deals. If those investors stay in the market, industry participants expect most of them to turn to solar investment tax credit (ITC) deals, especially considering the uncertainty surrounding the wind production tax credit’s (PTC’s) extension.

“Most ITC investors have been working hard to get wind deals done, and now they will be turning their attention to solar. There are less of them, so it’s safe to say the cost of capital is going up,” said Kristian Hanelt, senior vice president of renewable capital markets at Clean Power Finance.

Several investors and attorneys reported seeing yields for unleveraged deals between 7 and 9 percent, and estimated that at their peak, solar ITCs sold for approximately $1.40 and have since dropped to the $1.20s and $1.30s. Investors currently obtain a significant premium for equity that is behind the debt, according to Scott Stevenson, managing director at Bank of America. He also noted that yields have remained fairly constant.

Residential and commercial solar portfolios are drawing the most investment, said Jim Duffy, partner at Nixon Peabody LLP. Jim Howard, CEO of Dudley Ventures, and Duffy both noted that because of lower power purchase agreement (PPA) pricing, larger utility-scale deals are more difficult to pencil out. However, institutional investors said that the transactional efficiency of smaller utility-scale projects still makes them attractive investments. Several experts predicted the most growth to occur in the residential solar space.

The exact number of investors in the renewable energy tax credit is uncertain; most industry participants estimated the number of investors to be between 10 and 20, and some said it could be as high as 30. Some of the most active and well-known investors include PNC Bank, Citibank, Wells Fargo, US Bank and Bank of America. Bank of America will invest close to $1 billion in renewable energy deals this year, a 30 percent increase over 2011, and expects to increase its investment again next year, according to Todd Karas, a managing director at Bank of America. Newer players like Rabobank are also ramping up their renewable energy investments, said David Burton, partner at Akin Gump Strauss Hauer & Feld.

“Investors have a lot of leverage right now because there aren’t many. It’s a buyer’s market, so they can pick and choose the deals and they pick the safest deals,” Duffy said. This certainly holds true in the distributed solar market, which participants predict will see some developer consolidation going into 2013. “Only the platforms with the best developers and stories will be able to secure capital,” Hanelt said. “It’s probably going to force consolidation in the industry as the bar for the quality of the developer to secure capital goes up.”

Small but Expanding
Though the pool of energy tax credit investors is small, new investors from outside the financial services sector are beginning to test the waters. “The market is gaining investors and they want to be educated,” Michels said. “We’ve had a number of requests for that, and not from the typical equity investors you’d expect.” Several Fortune 500 companies are exploring the possibility of investing in renewable energy, he noted. “They see Google invest and save money, so they say, ‘if Google does it, then why can’t we do it?’”

Google, an environmentally conscious company with a substantial tax liability, is exactly the type of corporate investor that the market needs, several industry participants noted. The company has invested in both Section 1603 and ITC funds, including a $75 million residential solar ITC fund with Clean Power Finance. For now, banks and insurance companies continue to dominate the renewable energy tax credit landscape. But Michels and others say this may change as more corporations consider investing in renewable energy projects not just for their own facilities, but in general.

Barriers to Entry
Experts agree that the main obstacle preventing new investors from taking the plunge is the program’s complexity. “We continue to gain traction but it’s a long process,” Howard said of attracting new investors to the market. “Where there’s no permanency to the credit, the willingness of investors to put the time in and learn the credit and risks results in some diminishment of interest.”

However, experts point out a couple of silver linings. “It takes a long time to get comfortable, but once you dive into it they can all be packaged similarly,” Burton said. For solar, now that the industry has established a track record, there are more data points on performance that sponsors can point to when talking to prospective investor.

Some are calling for Congress to reform the program and simplify it. John Pimentel, president of Foundation Windpower, noted that the ability to treat renewable energy investments like master limited partnerships (MLPs) would encourage more investment in the market. Allowing MLPs to be used would result in billions of dollars flooding the renewable energy tax equity market, Michels said.

The recent Boardwalk Hall historic rehabilitation tax credit court decision underscored the complexity of the renewable energy tax credit program. Some experts indicate that although the industry should not ignore the landmark decision, it will ultimately have little effect on closing renewable energy deals. “It fundamentally goes to ‘what does it really take to be a partner?’” Howard said of the essence of the case, which involved a historic tax credit investment in New Jersey. “The nature of renewable investments is different but the partnership analysis is the same.” Duffy said that if a deal’s underlying economics are strong, a prospective investor would be unlikely to be dissuaded by Boardwalk Hall concerns.

Outlook for 2013
The top priority for virtually all players in the market, including current investors, is bringing new investors into the fold. Because of the high volume of Section 1603 projects still working their way through the pipeline, they have a limited amount of time – if developers do have to scramble for capital it won’t happen until next year, according to industry participants. “The market will continue to grow and want more equity,” said Dick Rai, manager at PNC Bank. “The loss of grants in lieu will hurt.” The National Renewable Energy Laboratory estimates that $25 billion in tax equity investment will be needed to meet market demand in 2013, far outstripping the current tax appetite.

Seasoned developers will need to step it up by making sure their equipment is backed by a tier one manufacturer, and newer players may find themselves teaming up with a more experienced developer to stay in the game. Rai predicted that project originators, as opposed to true developers, who have been able to source deals and pull together PPAs under the grant environment may have a harder time finding their place in next year’s ITC/PTC market, which he said will require more sophistication to navigate.

A tax equity scarcity next year would also dictate the types of projects completed. “If Section 1603 goes away and there’s not enough equity or debt to do all the projects, only the economically less risky deals will get done,” Duffy said. “You might not see the creative, community-oriented deals.”