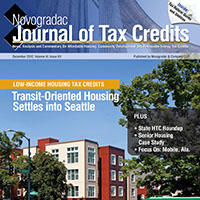 More than 900 communities are in danger of losing their rural designation if Congress does not pass legislation to extend a “grandfathering” clause that allows previously qualified areas to retain their rural status. The loss of a rural designation would affect future development of low-income housing tax credit (LIHTC) properties and could affect access to loans and other sources of funding for new and existing properties.

Rural Designations
Since its creation in 1949, the U.S. Department of Agriculture (USDA) has been tasked with assisting development of housing in rural areas by providing access to credit, mortgage loans and other capital to rural projects. When determining if an area is rural, the USDA relies heavily on the decennial census population figures to determine which communities are eligible for its Rural Development (RD) programs. Generally, communities with populations of less than 20,000 are designated as “rural” if they meet other qualitative factors. In 1983, Congress amended the Housing Act of 1949 to protect communities where the population has grown since the previous census, known as “grandfathering.”

The grandfather clause has gone through various iterations since 1983; the most recent iteration allows communities with populations up to 25,000 to retain eligibility if they were previously eligible under the 1990 or 2000 census. The most recent grandfather clause expired on Sept. 30, 2012. With the release of the 2010 census, any area that cannot meet the rural definition based on the 2010 census will no longer be eligible for rural funding.

Income Data
The USDA uses the income data from the census to determine program eligibility, prioritize projects and regions, and distribute allocations. The U.S. Census Bureau did not collect income data in 2010 and has said that it will not do so going forward. The USDA said in a September 2012 memorandum that it plans to use American Community Survey income and poverty data to determine median household income and state nonmetropolitan median household income.

The USDA uses the population data to determine which communities are “rural” and the income data to award grants and loans. USDA estimates that 921 areas are affected by RD’s use of the 2010 data. The majority of the areas are affected for at least one of three reasons:

Because some areas fall into more than one category, the total is more than 921.

For existing properties to avoid losing their designations, Congress would need to pass a bill to extend the safe harbor for formerly rural communities whose populations now exceed the USDA limit. Lawmakers would also have to pass a bill updating a 1974 definition of rural that excludes communities located within a metropolitan statistical area (MSA) for those communities to retain their rural designation. These changes would most likely come as part of a farm bill. Until Congress passes such a bill, however, stakeholders in rural communities have to consider what the change could mean for their new and existing properties.

LIHTC Developments in Peril
The loss of rural designations would affect LIHTC development in those communities. Section 3004 of the Housing and Economic Recovery Act (HERA) allows developers of 9 percent LIHTC properties in rural areas to use the maximum of either the national nonmetropolitan median income (NNMI) or the area median gross income (AMGI) to determine income limits. Projects financed with tax-exempt bonds are not eligible to use the NNMI. The ability to use the NNMI has helped spur development in rural areas in two ways:

Rural projects often have difficulty finding qualified individuals to occupy their tax credit units, and allowing properties to use a higher income limit increases the percentage of people who can qualify for the project, therefore helping units rent faster and decreasing vacancy loss.

“It has helped make these properties more feasible or feasible at all,” said Claudia Kedda, NAHB’s director of multifamily finance, of being able to use the NNMI. She added that losing the rural designation would also increase development costs because developers would no longer have access to RD’s credit programs, which are targeted to larger rural communities that typically fall outside national and regional banks’ footprints.

The 55 areas are spread across 15 states and territories. Puerto Rico (nine areas), North Carolina (eight areas) and Texas (seven areas) are the most affected. The average difference between VLI and 50 percent NNMI is $2,827 for these areas. It is important to note that 55 areas are affected in 2012, but that number could change in future years as income limits change.

It appears that there are approximately 175 existing LIHTC projects located in the 55 affected areas. The hardest hit states would be Missouri with 28 properties, Texas and North Carolina with 27 properties each, and South Carolina with 21 properties. It is unknown what percentages of these projects were financed with tax-exempt bonds and would therefore already be ineligible to use the NNMI.

The ability to build new LIHTC projects in these areas will be greatly impacted by the decreased income and rent limits. Let’s look at an example for a project in Carthage, Mo., which is located in Jasper County. The project selected the 40/60 set-aside, has 40 units and is 100 percent affordable.

The project using the NNMI would generate $30,240 more revenue each year. This revenue could be used to cover operating expenses. The increased revenue would also make projects more feasible because the project would be able to support $326,304 of more debt, assuming a 1.15 debt service coverage ratio with a 7 percent interest rate for 30 years. If the project keeps its rural status, it would still be eligible for USDA loans, which generally have more favorable terms than conventional loans. The project would also be able to target 5 percent more of the population, which would help keep vacancy loss lower than a project that is not able to use NNMI.

Hold Harmless
The impact to the approximately 175 existing projects is still unknown because it is unclear if the hold harmless provision under Internal Revenue Code (IRC) Section 142(d)(2)(E)(i) applies to the rural income limit determination under IRC Section 42(i)(8). (See related article on page 43.) If the hold harmless provision applies to projects that lose their rural designation, then there would be little to no effect on the existing projects. However, future opportunities to refinance and/or rehabilitate the project will be affected. Those projects will no longer have access to USDA funds to refinance or rehabilitate the project. Also, existing projects could also be impacted if they tried to use LIHTC to rehabilitate their project. The IRS has indicated that rehabilitation projects have their income and rents reset to the current income limits and lose any hold harmless benefit they had under a previous LIHTC allocation. Therefore, a project trying to obtain a new allocation of tax credits would no longer be able to use the NNMI but would have to use the 50 percent VLI.

If the hold harmless provision does not apply to projects that lose their rural status, the financial viability of existing projects could be immediately threatened. Using the facts from the example above of a 40 unit project in Carthage, Mo. – if the project was charging the maximum rent – the rental income would decrease by $30,240, which is an 8 percent decrease in annual income. In addition, the percentage of the population who qualify to live in the project would be reduced by 5 percent. Thankfully, existing tenants would not have to be evicted because they qualified under the limits in effect at the time of move-in (i.e., the NNMI), but the next-available unit rule would need to applied based on the lower income limit (i.e., VLI).

What’s Next
Several bills to address the issues have been introduced during the current legislative session. In September, Rep. Jeff Fortenberry, R-Neb., introduced H.R. 6416, the Rural Housing Preservation Act of 2012, to preserve as rural until Sept. 30, 2013 all communities that were eligible for RD housing programs on June 30, 2012. Sen. Ben Nelson, D-Neb., introduced S. 3541 to preserve the 2000 census communities and increase the population limit to 35,000. Two bills introduced in 2011, H.R. 273 and S. 878, would safeguard rural communities until 2020. At press time, all four bills had been referred to committees or subcommittees.

In the September memo, the USDA also announced that communities designated rural would remain rural until March 27, 2013; the extension was part of the Continuing Appropriations Resolution, 2013 (Public Law 112-175). At press time, the USDA expressed support for a food, farm and jobs bill and said that it expects to provide guidance about the effect of the census on smaller, more remote communities. NAHB was also focusing its efforts on getting a bill passed that would include a grandfathering provision. NAHB joined with other industry groups, including the National Association of Realtors, National Rural Housing Coalition and Mortgage Bankers Association, to petition Congress to enact legislation to protect the communities.