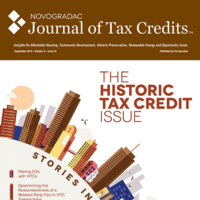 Question: What is the historic tax credit (HTC) transition rule and how does a building qualify?

Answer: The HTC was modified under tax reform passed in December 2017. Under prior law, qualified rehabilitation expenditures (QREs) were taken into account for the taxable year in which these expenditures were placed in service, which meant that the HTC was claimed in full when the property was placed in service. However, under tax-reform legislation, HTCs resulting from QREs paid or incurred after Dec. 31, 2017, are claimed ratably over five years.

An exception in the final legislation is more commonly referred to as the transition rule. If a building is subject to the transition rule, then HTCs are claimed under the provisions that existed before the effective date of tax reform.

Qualifying for the Transition Rule

How does a building qualify to be under this transition rule? Two criteria must be met.

First, the building must be owned or leased by a taxpayer during the entirety of the period after Dec. 31, 2017. Any such change that would change or disturb the taxpayer’s ownership in the building would cause that taxpayer to fail this requirement.

Remember that for all historic properties, the taxpayer must have owned the historic building on Jan. 1, 2018. Nothing can be done now to change that and thus, if the property was not owned by the taxpayer, it will not qualify under this rule. For purposes of this discussion, it can be assumed that the requirement is satisfied.

For non-phased properties that are subject to the 24-month measurement period test, the taxpayer must incur QREs between June 20, 2018, and June 20, 2020, that exceed that taxpayer’s adjusted basis in the building on June 20, 2018. Considering the typical construction period of historic renovations time is running out for taxpayers to incur sufficient QREs between now and June 20, 2020, to satisfy this requirement, if they haven’t already. Of course, every project is different and the timing of when QREs will be incurred and the taxpayer’s adjusted basis in the property on June 20, 2018,  will factor into this determination. Meeting this test will become more and more challenging. Keep in the mind that the project does not need to be completed by June 20, 2020, but the QREs are required to be placed in service by Dec. 31, 2020, for the HTCs to be able to be claimed in full and not over a five-year period.

For property owners that have submitted or intend to submit a project as a phased rehabilitation that satisfy the National Park Service (NPS) requirements, the taxpayer can use a 60-month measurement period, under which taxpayers must incur QREs between June 20, 2018, and June 20, 2023, that exceed the taxpayer’s adjusted basis in the building on June 20, 2018. Thus, the taxpayer has an additional three years to satisfy this requirement. Taxpayers should evaluate any opportunity to have their project qualify as a phased project to allow themselves more time to meet the requirements of the transition rule.

The window for many projects to qualify under the HTC transition rule that was made part of tax reform is closing slowly for owners of historic buildings. The difference in the value of the HTC to a tax credit investor in a syndicated transaction can be substantial to a property owner, thus one should look at opportunities to avail themselves of these rules. An experienced HTC consultant can help navigate these complex requirements.