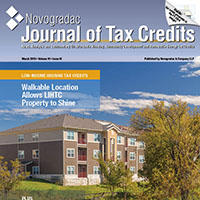 The recurring drama of short-term extensions has become all too familiar for New Markets Tax Credit (NMTC) program participants. By the time Congress reauthorized the NMTC program in December 2014, at $3.5 billion for its 2014 round, the Community Development Financial Institutions (CDFI) Fund already had a pool of 263 applicants requesting an aggregate $19.9 billion in NMTC allocation authority.

“Everyone has raised the bar,” said Michael Johnson, managing director and chief compliance officer of Advantage Capital Partners. As the program matures, Johnson said experienced participants continue to build their low-income community investment track records with stronger and deeper community impacts, increasing the level of competition in the application process.

The NMTC market continues to grow–not by new entrants as much as by seasoned players. James D. Howard Jr., founder and chief executive officer of Dudley Ventures, said that while a few small- and middle-market banks entered the NMTC market as investors in the past year, the main drivers of industry development have been the veteran, core players that continue to expand their appetites and grow their NMTC groups.

“The complexity of the program is a substantial barrier for new investor entrants - the lack of permanency for the program makes it much harder for new entrants to justify the cost of developing a NMTC investor platform and the challenge of tackling the program’s steep learning curve,” said Deborah La Franchi, president and chief executive officer of Strategic Development Solutions.

Others agreed. “Insurance companies and corporations who may have investment activities in other tax credit programs are reluctant to commit the resources necessary to staff up for inclusion of a new asset class such as NMTCs without a clear path toward [program] permanency,” said Randy Kahn, executive vice president of Greenline Ventures.

Credit Appetite, Pricing Remain Strong
Indicative of the recovering economy and maturity of the NMTC program, experienced investors continue to demonstrate robust demand for the credits. “The appetite for the new markets tax credits is the strongest that I’ve seen in the history of the program,” said Howard. “The program has been around long enough now that the program and the risks associated with it are understood.”

Demand for credits continues to support stable pricing, with most participants seeing credit prices in the low- to mid-80-cents range. Some say Community Reinvestment Act (CRA) considerations and other factors still help projects command credit prices on the higher end of the spectrum. “The deals that are in high-demand CRA markets are going to get more attention,” said Eric Rosen, NMTC program director at SunTrust Community Capital, who added that client relationships can also play a significant role.

Others say that the overall high level of credit pricing is due more to the increased appetite for credits than to competition for certain projects. La Franchi said that as more of the larger bank investors have returned to the market, they are using pricing to try and secure deals with qualified active low-income community businesses (QALICBs)–a trend that she said has been the case for the past couple of years, a stark contrast to the recession years when there was very little appetite for credits.

David Gibson, senior vice president and NMTC product manager for PNC, agreed. “From what I’m seeing, it’s not based on the type of project,” he said. “If a project has allocation committed to it, it’s able to command those prices.”

Debt Availability Recovers
Along with the restored appetite for credits, participants reported a recovering availability of debt for NMTC deals. “Ever since mid-2013, the debt capital markets have come back, whereas beforehand on the real estate side, they were nonexistent,” said Rosen.

Others also noted the improvement. “The market for NMTC leverage loans is mirroring the general lending market where we are seeing greater availability of debt, along with better pricing and terms–all of which translates into even greater benefits we can drive to the small businesses we finance,” said Johnson.

Multiple-CDE Deals
With heightened competition for allocation authority and shrinking individual award sizes, program participants often find that collaboration can make deals more efficient. “In some cases, it’s easier overall to partner up on projects and pool resources than to compete against each other,” said Gibson. “We financed 30 projects in 2014 and we were the sole investor in every project. Almost every deal was a multi-CDE deal.”

“One of the trends is investors and CDEs trying to be as practical as possible in their coordination of efforts, legal costs and negotiating deals,” said Kevin Nowak, national equity investment manager for Key Bank. “The emphasis is to try to simplify the transaction as much as you can.”

Future
Despite proven demand for the credits and reports illustrating how the NMTC pays for itself, the program has yet to be made a permanent part of the tax code and the future of the NMTC remains uncertain. In his fiscal year 2016 budget proposal, President Barack Obama proposed making the NMTC program permanent with $5 billion of allocation authority per year, as well as authority to offset alternative minimum tax (AMT) liability. Similarly, the New Markets Tax Credit Extension Act of 2015 (H.R. 855) was introduced in February to permanently extend the NMTC, provide an annual inflation adjustment and allow the credit to be taken against AMT liability.

Industry participants agree that permanent extension of the NMTC would be a game-changer. “Permanency–that’s it, one word,” said Howard. “With that, it would allow inefficiencies to be addressed and allow more investment in infrastructure. It’s our biggest obstacle and our biggest opportunity.”

“The program participants have to fight hard for every reauthorization–either every two or now back-to-back years,” said La Franchi. She said that program permanency would likely create a downward movement in fees, as future allocations could be anticipated to help cover platform costs, and new entrants would be encouraged to enter the market.

Gibson said that in addition to program permanency, the amount of allocation authority available should also increase. “In real dollars, there’s a much smaller pool of allocation than in the beginning of the program,” said Gibson. “The industry’s two big challenges are finding a way for permanency and finding a way to tie the amount of allocation to some sort of index. If we continue at $3.5 billion, then every year it becomes increasingly irrelevant in real terms.”

Rosen said he would like to see an elimination of basis reduction. “Basis reduction is keeping tax credit pricing depressed,” he said. “We need to get more subsidy down to low-income communities and put the [NMTC] on a level playing field as other tax credits.”

One of the biggest threats to the program is misinformation or lack of information about it, said La Franchi. “We need to make sure Congress understands the true story of how this program generates more revenue than it uses,” she said. “We can’t assume that everyone understands the program the way that we do; we need to get our story out there. Just because it has been extended in the past doesn’t mean it will be again. We can’t rest on our laurels.”

Enhancing, Expanding Tax Incentives is Key Part of Funding Infrastructure
QLICI of the Year Awards Honor a Variety of Developments
NMTC Participants Expect More Investors to Return Ahead of $5 Billion Allocation Round
END_OF_DOCUMENT_TOKEN_TO_BE_REPLACED