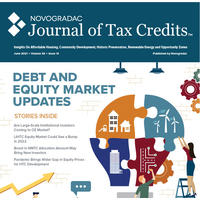 While the financing of renewable energy projects is most associated with the tax credits that apply to the particular technologies, the need for traditional debt continues to be very important. Here are some of the things to be prepared for when you consider doing so:

Lenders prefer to advance funds to mature technologies. That’s good for photovoltaic (PV) solar and wind, of course. But it’s not as good for the lesser-known and lesser-used technologies where there may be less evidence of demonstrated success. A lender will want to have confidence that the technology is proven and that the manufacturer of the required systems and parts has capacity to both get the project in service and repair it if things break down. At the same time, lenders don’t want a manufacturer or sponsor who is too popular and may be unable to keep up with the urgent requirements of the particular project, should the need arise.

Experienced deal closers, project sponsors and subcontractors are important here. A lender wants to know that the team can get the project off the ground, financed, built and operating with a minimum of “drama.” Many lenders will not provide funds without permits already in hand, and a construction schedule that is both prompt and sensible. Promising delivery dates that are unlikely to be met will undermine the lender’s confidence and cause it to not want to provide financing. On the other hand, a proven record from all of the many participants will smooth the lending process.

Cash to support the repayment of loaned funds can come from many sources, particularly, sponsor equity, tax equity, a solid power purchase agreement (PPA) with a credit worthy off-taker and government subsidies. Expect the lender to review each carefully. Indeed, a lender will care about the creditworthiness of the various participants, even if the loan is made on a nonrecourse basis. Of course, off-takers can range from public utilities to single commercial and industrial (C&I) purchasers to residential users who have been accumulated into large pools. There can be different strengths and weaknesses–utilities may have the most obvious credit ratings and residential pools provide safety in off-taker credit scores and the sheer number of participants. On the other hand, C&I is more dependent on very particular corporate off-takers who may require a closer review. Perhaps this explains why many C&I deals involve well-known corporate “brands.” Of course, some projects go into the spot market instead of having a particular counter party to a PPA. Here, we are seeing some heavyweight participants provide “hedges” that level out and even guarantee the cash flow that a lender wants to see.

4. Project-Level Debt vs. Back Leverage, Cash Flows and the Five-Year Recapture Period

Many renewable energy projects rely on “back leverage” in which the project sponsor does its own borrowing outside the partnership and then uses both its own and borrowed funds as the source of its capital contribution to the project. Accordingly, a project financed in this way doesn’t have a “direct” lender, and there is no lien on the facility. This structure may be favored by tax equity investors who would otherwise be concerned by the possibility that the lender might foreclose on the project during the five-year recapture period that applies to projects claiming the investment tax credit (ITC). Still, this leaves the risk that the sponsor might be replaced by a lender as managing member if things don’t go as planned.

Regardless of the debt structure, expect the lender to weigh in on the order in which cash distributions are made. If the debt is provided at the entity level, then it will be expected that a lender will get paid before the equity. But a similar requirement typically applies if back leverage is involved. Here, the bank will likely want the project sponsor to get priority in cash distributions to assure that the sponsor has the cash needed to make its payments due on the back-levered debt. All things considered, the parties are well advised to address the loan structure early on. In particular, regardless of the loan structure, the tax equity investor will want to address priority in cash distributions and assuring the steps that the lender will and won’t take if the project has a problem. Often, this calls for a non-disturbance agreement that defines the lender’s rights upon a default.

In this popular ITC deal structure, the landlord owns the facility and leases it to a “master tenant,” which operates the project and sells the power. The depreciation deductions stay with the landlord while the master tenant claims the tax credits pursuant to a “passthrough election.”

Of course, often the landlord consists largely of sponsor-affiliates who are either individuals or closely held businesses, and these taxpayers are subject to the “at-risk rules” that can limit their ability to claim tax breaks. I’ve written about these provisions many times before, so I won’t go into the details other than to observe that even though the investor at the master tenant level may be a large widely held corporation, the requirements of the at-risk rules often have to first be met at the landlord level. With this in mind, the sponsor of a lease-pass-through transaction should assure that the debt meets either the qualified nonrecourse rules or the 75% level payment loan rules (if the latter is applicable), so as to assure that the tax credits can be passed to the master tenant. In general, the qualified nonrecourse rules allow nonrecourse debt from a person in the business of lending money or a government agency to count toward the taxpayer’s at-risk amount, provided that it is not more than 80% of the tax credit eligible basis. The level payment rules provide a similar exception for certain technologies (primarily wind and solar) where the debt is paid off in level payments (like a car loan or house mortgage), generally over not more than 12 years.

Because the lender cares so much about the project meeting its projected cash needs in order to timely finish construction, commence operations and pay its bills, the lender will likely want the tax equity to close no later than the debt closing. This doesn’t necessarily mean that the tax equity has to put up all its money at closing–indeed, the usual 20% before placement in service (perhaps contributed 1% at closing and 19% at mechanical completion), with the balance soon thereafter should be fine. More important to many lenders is knowing that there is a contractual obligation from the tax equity before the lender commits its funds.

To repeat the most important advice in these points, the investor and the lender should work out their respective deals as early as possible to assure that there are no last-minute surprises that can derail a closing.