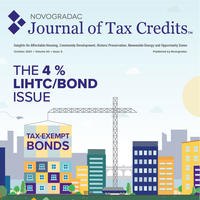 For several years now, across the nation, competition for multifamily private activity bonds (PABs) has been increasing. Every year, a few more states find that they have more applications for affordable housing PAB financing than they can fund. Affordable housing PAB issuance set a new recorded high in 2019, according to the Council of Development Finance Agencies (CDFA), and when 2020 reporting is complete, we anticipate yet another record high.

For affordable housing developers, this means that accessing PAB funding (which generally makes a property eligible for 4% low-income housing tax credits [LIHTCs] on the rent restricted low-income units) is not as easy as it once was, and now is often a competitive process.

The federal government allocates PABs to states and territories annually on a per-capita basis, with a small-state minimum (for 2021, it’s $110 per capita or $3,245,625). States and territories can use PABs for a variety of purposes, including affordable rental housing. Historically, states used less than their annual cap, with the unused portion carrying forward for up to three years. So for years, affordable housing developers could apply for PABs and be confident that they would receive the bonds and qualify for the associated 4% LIHTCs.

That has been changing.

In 2015, the national issuance of multifamily housing PABs was $6.6 billion, a slight increase over 2014, but roughly consistent with historic amounts. Starting in 2016, annual bond issuances increased dramatically, soaring past $15 billion a year and reaching a record $16.4 billion in 2019, the last year for which we have confirmed numbers. California is the most noteworthy example, but several others states–including Texas, Florida, Massachusetts and Colorado–set multifamily housing PAB issuance records in 2019.

The increasing use of PABs for multifamily rental housing comes out of an overall PAB cap amount that hasn’t increased at the same pace. In 2015, the cap was $34.9 billion, in 2019, it was $37.4 billion.

The increased use of PABs for affordable multifamily rental housing has led to a dramatic increase in competition in many states. By 2019, about 15 states saw the competition for bonds outstrip supply. There appears to be no letting up.

The increasing demand for PABs has driven some states to change the way they approach allocating PABs. A PAB-funded affordable housing development must be financed at least 50% by PABs in order to be eligible for 4% LIHTCs on all of the low-income units. This requirement has led many developers over the years to apply for much more than 50% (in some cases upward of 70%) to ensure they don’t drop below the required 50% level and to get the benefit of beneficial borrowing rates. However, many agencies are making efforts to provide PAB cap to as many developments as possible. In California, for instance, the state went from having no maximum level for many years to a 60% maximum before recently dropping the maximum to 55% due to competition. Furthermore, developers are incented to request fewer bonds because California prioritizes developments that request less bond allocation.

As more states approach their annual PAB caps and competition for cap increases, developers must adjust their practices. With that in mind, here are seven steps developers can take to improve their chances of receiving PABs for their developments.

A foundational step in securing PAB financing is to assemble a capable and experienced team–and not waiting to do so. That includes the core development team, but also a bond attorney, a CPA, a valuation analyst and an expert (or expert team) to work with the application.

Depending on the allocating agency, other members might also be necessary. For instance, some jurisdictions may have requirements for certain energy conservation measures or the architecture of the property. In that case, having an experienced energy consultant or architect who has worked with the bond-issuing authority is crucial. Knowing your agency (see below) can inform who should be on your team.

There is no universal template for how states or territories issue tax-exempt PABs, so prepare for the application process by nailing down specifics for the agency to which you’re applying. In some states, the state housing finance agency is the allocator. In other states such as California, there is a designated bond allocation authority (although bonds are issued by agencies that get the bond allocation authority’s approval). In Massachusetts, the state allocates bond cap to MassHousing and Mass Development, two state agencies that then issue the bonds. Other states, such as Colorado, have a hybrid approach, with the state agency issuing bonds and also sub-allocating to other agencies or government entities to issue the bonds.

Before moving too far along the timeline, always take time to familiarize yourself with the bond-issuing authority. That clarifies the next step.

3. Know How PABs are Allocated and Adjust if Necessary

Once you’ve identified the bond-issuing agency, learn how the agency awards the PABs. In some states and territories–such as Arizona, Kentucky, Rhode Island and others–bonds are issued on a rolling basis, so timing is everything. In other states and territories, there’s a competitive application, so meeting or exceeding the various standards is important.

Once you’ve identified the allocation method of the bond-issuing authority, it’s time to make your development competitive. One smart step is to approach the bond authority for a discussion to understand the types of property they desire. For a developer who already owns property, this discussion can help clarify the type of development that will be most competitive and what property type won’t (one example: make sure that the authority will fund acquisition-rehabilitation projects before going too far down the road). In Colorado, for example, it’s required to discuss options with the agency ahead of time to ensure that the property is the type being sought by the state.

Other issues also come into play: For instance, lowering the percentage of project costs financed by the bonds gives developers a competitive advantage in California. Also, regardless of where you build, communication with the bond issuer is crucial, since that is who applies for the bonds.

Some other actions can play a role, depending on the allocating agency:

The next step is to assess the development’s financial feasibility. For most allocating agencies, a primary step in due diligence is ensuring developments are feasible–in the simplest terms, an agency doesn’t want to allocate bonds to a property that will be unable to close due to the property not penciling out financially.

To do this, ensure that your operating expenses are accurately projected and that the property can meet its debt service requirements. Take time before applying to get accurate, professional estimates and ensure that you know what rents and construction costs to expect. A reminder: Property financed by bonds and LIHTCs must rent at the lesser of the bond and LIHTC rent limits.

Projects typically need an inducement resolution from the bond issuer–communicating the intent to issue the bonds for the multifamily housing property–before application. For many allocation agencies, there is a specific timeline. Within a period of time after the inducement resolution is issued, the bond issuer must also communicate its intent in a public hearing, allowing community members to respond.

Beyond the inducement resolution, agencies have various application deadlines: Some have a rolling deadline, while others may have one or multiple deadlines during the year. Some states, such as Arizona, require attendance at a workshop that explains the application process before allowing applications.

Check with the allocation agency to make sure you comply with any pre-application deadlines.

PAB applications benefit from multiple reviews by multiple people–and most importantly, by experienced experts. A good rule of thumb is to always have a PAB application reviewed by at least one party who didn’t participate in its assembly. Maybe have multiple reviews. That decision can sometimes make the difference between success or failure, especially as agencies scrutinize applications more to identify the best applicants and developments.

7. Avoid Problems Down the Road

There are obvious missteps that developers should avoid when building PAB-financed properties, including failing the 50% test, which can dramatically reduce the amount of LIHTCs for which the property qualifies. That mistake can endanger the financial feasibility of the entire development–so frequently reviewing the 50% test is wise.

Other tax guidelines are also important, including correctly differentiating the IRS test for “good costs and bad costs” and knowing how far in advance predevelopment costs can be incurred, which depends on the date of the tax-exempt bond inducement resolution. Ensuring compliance with bond and LIHTC regulations doesn’t start when the property is placed in service or even when the bonds are awarded. Wise development teams examine those issues from the start.

The presence of PAB-financed housing continues to make a difference in addressing America’s affordable housing crisis and as more developers consider bonds as the key financing for their properties, competition will continue to increase.

Following the above-mentioned steps can improve the chances your property will receive PAB funding, even in a competitive state. Attention to detail is crucial.