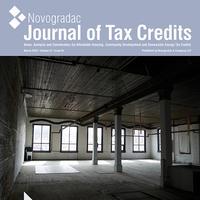 Monogram Foods Solutions, a manufacturer of meat products, snacks and appetizers, is a stabilizing force in Martinsville, Va.

Because of the expansion, Monogram needed a better way to dispose of the wastewater produced by its 175,000-square-foot facility. In June 2017, Monogram completed construction of a clean energy plant adjacent to the production facility that uses an anaerobic digester (AD) to treat its wastewater. Jeff Johnson, chief operating strategy officer at Monogram, said the treatment facility was necessary to stay in compliance with the city’s water treatment system.

The production facility’s water runs through the waste treatment system. It passes through an AD, which uses bacteria to break down the solid food waste in the water. As a result, the bacteria produces methane gas. Monogram now has the ability to capture and convert that methane gas into a renewable form of electrical energy. The energy produced through the conversion process joins the Appalachian Power grid, which serves much of the Martinsville community, and the treated water returns to the city for further treatment. Monogram’s clean energy plant was named the 2017 project of the year by the American Biogas Council.

Jim Lang, shareholder at Greenberg Traurig, tax credit counsel for Monogram, was pleased to use ITCs on this project because, “anaerobic digestion is one of the [ITC] orphaned technologies [that expired at the end of 2016 and were left out until being added back to the ITC with the Bipartisan Budget Act of 2018]. It met the safe harbor date and emphasizes the benefits of the inclusion of these technologies in the production of clean, sustainable energy.”

Impact on the Community

Building the treatment plant allowed Monogram to continue to grow at its Martinsville facility. “This project allows us to increase capacity by 75 percent,” said Jackson.

“They have expanded by more than 350 jobs in last three years,” said Lang. He said those jobs would have been at risk without the addition of the treatment plant. Five full-time employees will be hired to run the clean energy plant.

“Without this, Monogram would have had to reduce the output of the facility and as a result lose about 200 jobs,” said David Umpleby, president and CEO of French Lick Redevelopment, one of the two community development entities (CDEs) that provided a NMTC allocation to the development of the treatment plant.

“The wastewater treatment plant has a huge environmental impact,” said Westerbeck. “The electricity created at the plant will offset 40 percent of the plant’s energy consumption.” Westerbeck said the plant will also decrease Monogram’s use of fossil fuels.

“New markets tax credits were a good fit for this investment primarily because of the environmental impact,” said Lang. “This facility generates its own clean energy, reduces carbon dioxide emissions and properly disposes of wastewater.”

The development was financed with equity from both NMTCs and ITCs. U.S. Bank provided $4 million in NMTC equity. “We have done two or three other deals with Monogram over the past few years. It really helped that they closed a deal with us before,” said Westerbeck. “It’s always a challenge to combine the ITC and NMTC.”

“It is difficult getting two tax credit investments with two different structures to work together. The NMTC is a debt structure and the ITC is an equity structure,” said Lang. “The tax credits were so critical because Monogram didn’t use outside financing.”

DV Community Investment LLC provided a $7 million NMTC allocation. And, Dudley Ventures, parent of DV Community Investment, brought in Valley National Bank to provide $3.3 million in ITC equity to the project. “Bringing economic enhancement to nonmetro communities is one of our CDE missions,” said Howard. “The installation of the treatment plant gives Monogram the capacity to grow for years to come.”

French Lick Redevelopment provided a $5 million NMTC allocation. Umpleby liked this project because it had a good developer, interesting technology, excellent community impact and a good CDE partner. “This was a typical NMTC structure, but when you add the ITC component, that adds issues to closing that have to be addressed,” said Umpleby. “A lot of third-party data was needed for this new technology to ensure the transaction worked.”

The capital stack was rounded out with $10 million in equity from Monogram. “They decided to self-finance rather than involve a lender,” said Westerbeck.

“Building the clean energy plant allowed Monogram to not only continue to grow in Martinsville, but to do so while minimizing its carbon footprint,” said Matt Meeker, partner in the Dover, Ohio, office of Novogradac & Company LLP, which is providing tax structuring consulting and financial modeling services. “Combining the NMTCs with the ITCs allowed Monogram to complete the financing of this project and continue to positively impact this rural community for years to come.” 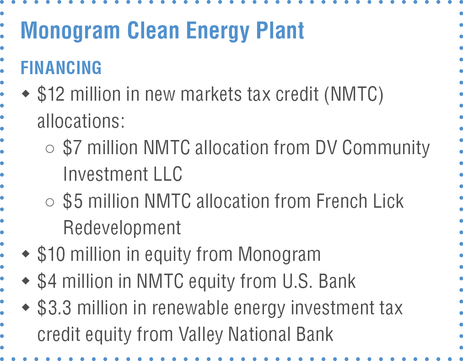