The State of Historic Tax Credits: Connecticut Looks at Boost to Annual Cap

For more than a decade, Connecticut has had a state historic tax credit (HTC) administered by the Connecticut Office of Culture and Tourism (CCT). The program began in 2006 as the Connecticut Historic Structures Rehabilitation Tax Credit program and was for residential conversions to incentivize housing, especially affordable housing. At that time, the program returned 25 percent of eligible costs up to $2.7 million per project, with an annual program cap of $15 million. In 2007, the program was expanded to include the commercial portion of mixed-use buildings and a 5 percent bump for developments where 20 percent of the residential units were affordable (for a 30 percent credit for applicable projects). These projects were eligible for a higher project cap of $5 million and a three-year overall cap of $50 million.

Both versions of the program were certificated and, like the federal HTC program, followed the Secretary of the Interior’s Standards for Rehabilitation (Standards). The main difference from the federal program was that there were five parts to the Connecticut program versus the federal HTC’s three, which continues to be the case. The additional two parts are related to a request for a reservation of funds from the capped program and a request for a tax credit voucher.

In 2011 the program was renamed the Connecticut Historic Rehabilitation Tax Credit program. Like the previous iterations of the program, it provides a 25 percent tax credit on the qualified rehabilitation expenditures, but the uses covered have been expanded to include nonresidential use consistent with the historic character of such property or the district in which such property is located. The provision for additional credit remains for properties that include affordable housing as provided in Section 8-39a of the general statutes. The credits can also be issued when a phase is completed in a multiphase project. The program now has a project cap of $4.5 million and the program cap was more than doubled to $31.7 million per fiscal year.

The credit vouchers are freely transferable up to three times to any Connecticut taxpayer. Over the history of the program, Eversource, formerly Connecticut Light and Power Company, has been a large purchaser of the HTC and there is typically a nonprofit donation loan structure used by the developer when the credits are transferred to the end user.

Even with the increased cap, the program has easily met the annual cap for the past three years, a term that runs from July 1 to June 30. This year, the program hit its cap faster than ever, with the funds fully reserved by October. During the initial years of the program, there were times they barely met their annual cap. 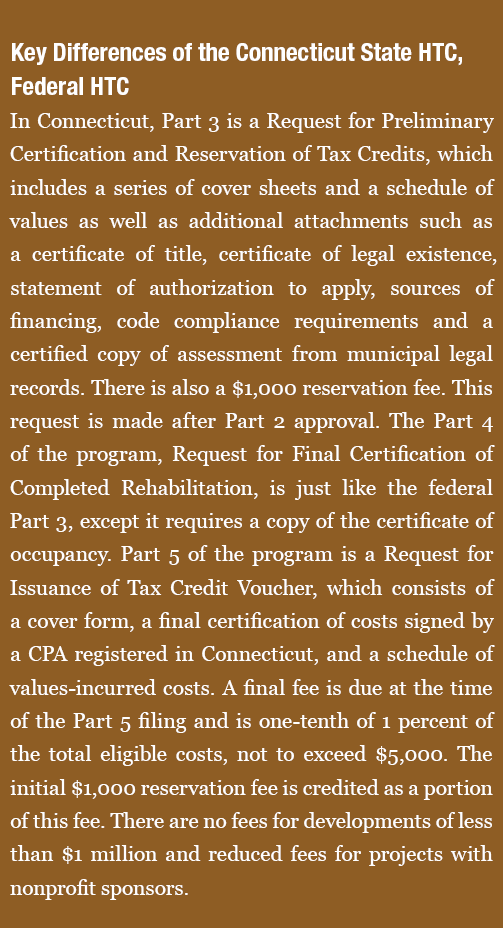 Julie Carmelich, historic rehabilitation tax credit administrator for the state historic preservation office, identifies a few reasons for this trend: “All new programs take a while to gain steam,” she said. “The unfortunate timing was that the state historic tax credit came about just at the bust of the housing market. From 2008 to 2010, people were still recovering and banks were shy about lending. It was bad timing all around. I credit quite a bit of the success of the program with Gov. [Dannel] Malloy’s commitment to the historic credit, affordable housing and the brownfields program. These pieces have come together to create a boon for preservation in the state.”

Based on the speed in which the cap was met and the growing demand for credits in the state, CCT recently developed new guidelines for the reservation of tax credits. The guidelines focus on readiness to proceed and require additional documentation relative to secured financing, construction schedule, detailed pro forma, list of project team members and their experience as well as letters of support. Additionally, information regarding job creation, how the development relates to other planning goals such as transit-oriented developments, and if there are any unique preservation aspects to the project are now required with the state Part 3 filing.

Statistics provided by the National Trust and the Historic Tax Credit Coalition prove that the program certainly has increased the number of the HTC developments in Connecticut over the past 13 years and has led to significant investment. There have been 105 projects using the federal HTC during that time, representing $769,863,234 of development costs, generating more than 8,500 jobs and more than $45 million in state and local taxes. Looking at the actual projects on an annual basis, more have taken place since the inception of the state HTC and the projects that have happened have been larger investments than those that occurred before the program.

With the use of the state HTC growing every year and the data showing its positive economic impact, advocates have decided it’s time to propose an increase to the annual overall cap. SB 819 was filed in the Connecticut legislature, proposing an increase in the annual program cap from $31.7 million to $60 million. In its written testimony for the Commerce Committee public hearing in February, the Connecticut Preservation Action (CPA) noted that since July 1, 2014, 100 new applications were filed for the state program but only 52 were able to receive reservations, meaning a significant number of projects were either stalled or abandoned due to the lack of this important funding source. CPA also organized other testimony for the hearing from architects and consultants to nonprofit and for profit developers.

“The program has such a significant impact on the historic resources and the economy in our state,” said Tod Bryant, a historic consultant and board member of CPA. “The project cap helps distribute the funds to large and small projects, but clearly the current cap has an impact on the overall number of projects and discriminates against the smaller ones. We also think this is an important time to increase the program as tax reform looms at the federal level and [potential] loss of the federal program [would] put a great emphasis on the state-level programs. We believe an increased state program makes Connecticut more competitive as developers are looking for projects.”

As for the obvious goal of the state HTC in helping to create more affordable housing in the state, CPA pointed to this fact in its letter citing that between 2015 and 2016, 1,515 units of housing were created using the program. More than half of them were affordable. “We are always looking for affordable housing development opportunities in states with strong state historic and low-income tax credit [LIHTC] programs,” said Adam Stein, senior vice president of WinnDevelopment. “Especially here in New England, where acquisition and construction costs are so high and the credit dollars play such an important role in making projects financially feasible.”

Based on the available data and the success of the program, it seems an increase in the annual cap would have a positive economic impact while preserving the state’s important character. Daniel Mackay, executive director of the CT Trust for Historic Preservation, agrees. “There have been many positive changes to the program since inception in 2006,” he said. “You look at its impact both from a preservation and an economic development perspective and it is clear that it has had a positive impact. The logical next step in order to continue to preserve buildings and investments in our state is to raise the cap, which would make the Connecticut program one of the strongest in the country.”

We hope the governor and legislature are listening.

Albert Rex is a partner of MacRostie Historic Advisors LLC and Director of MHA Northeast in Boston. With more than 20 years of professional experience in historic preservation and economic development, Albert and his team provide services for a wide range of historic rehabilitation projects. Albert can be reached at [email protected] or (617) 531-7161. Visit www.macrostiehistoric.com for more information.

May 4, 2021: What CDEs and Qualified Businesses Should Be Doing Now to Prepare for the Next NMTC Application Round
Posted on May 4, 2021
April 27, 2021: Maximizing the Benefit of State and Local Tax Incentives and Exclusions for Renewable Energy Properties
Posted on April 27, 2021
April 20: 2021: Understanding Provisions of the Affordable Housing Credit Improvement Act of 2021
Posted on April 20, 2021
END_OF_DOCUMENT_TOKEN_TO_BE_REPLACED