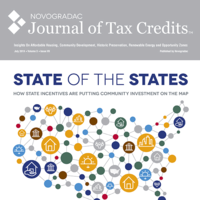 This issue of the Novogradac Journal of Tax Credits highlights various state-level tax incentives and how they interact with the federal versions. Two things are obvious: State tax incentives are important and certain types are more successful.

How state tax incentives are structured varies widely. Many states have incentives that largely mimic the federal version (especially in the cases of the LIHTC and HTC), while others are more targeted, such as to specific types of businesses, geographic areas, or demographic groups. Some states embrace tax-based incentives for community development, others are averse to using the tax code to incentivize such activities.

State tax incentives are important–and it’s worth looking at the big picture of what states are doing, what works and how different states are adapting. Most importantly, it’s worth examining what works best when it comes to state-level incentives for affordable housing, community development, historic preservation and renewable energy.

When it comes to the major community development state tax incentives, the HTC is the most common; 35 states have some version of a historic rehabilitation/preservation credit. That number has been consistently high and may grow higher, as legislation was introduced this year proposing state HTCs in California, Hawaii, Michigan, Nevada and Tennessee. There is a specific geography to state HTCs, with a vast majority of the states without a state credit located on the West Coast, which is not surprising given that the percentage of historic properties in those states is presumably lower than central and eastern states. 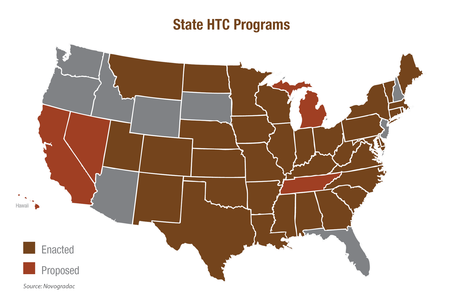 The LIHTC is a little less common, with 18 states having some version of the incentive (including Nevada, where a bill was signed in June) and six more states–Arizona, Kentucky, Maine, Maryland, Pennysylvania and South Carolina–having LIHTC programs proposed during this year’s legislative session. 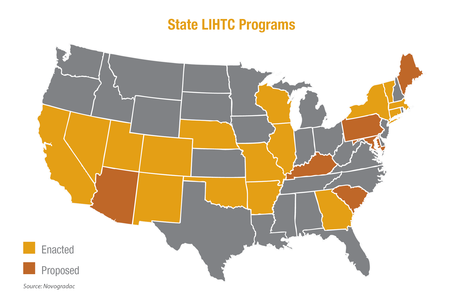 The NMTC is a little more complicated. Variations of state community development tax credit incentives are available, but generally fall short of being considered a state version of the federal NMTC. Still, Novogradac’s website lists 14 states with NMTCs–and California had an NMTC incentive proposed during this legislative session. 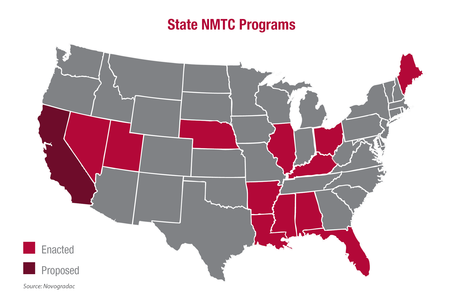 The newest major community development incentive, opportunity zones, is the subject of a broad range of proposed state-level incentives, as detailed in an article later in this issue. While some have been slow to pass, the sheer volume and variety of state-level legislation to create OZ-type incentives is encouraging.

The availability or lack of state-level tax incentives can make a huge difference for communities in those states.

Federal tax incentives play a massive role in financing affordable housing, community development, historic preservation and renewable energy, but one fact is sometimes overlooked by those not involved in the transactions: the gap between the development costs and the equity provided by the federal incentives.

For those looking to complete transactions, there often remains a substantial hole in the financing–after including equity from federal incentives, traditional loans and other financing. That’s where state- and local-level incentives can make the biggest difference.

Federal financing such as grants and local benefits such as tax increment financing play a major role in filling those gaps. State tax incentives, though, are the most obvious way that developers can complete the capital stack for an affordable housing, community development, historic preservation or renewable energy development.

Beyond the fact that a state tax incentive can bridge the difference between a development happening or not is the fact that state incentives can provide a deeper level of local control over what gets done.

Being able to influence the type of development for properties completed with state-level incentives is a bonus motivation for states.

State interest in exerting that influence can be seen clearly in proposed state-level OZ legislation. This year many state legislators (in Alabama, Kentucky, Texas, Washington) proposed, for instance, a state-level incentive for OZ development in rural areas and the Alabama legislation became law. In some states (Alabama, Louisiana) certain types of OZ development were targeted with state incentives. Still others (Alabama, Ohio, Texas) saw legislation introduced that would use state incentives to encourage investment in state-specific opportunity funds–creating a bonus for local investment. Yet another method is to make OZ investments eligible for existing state programs, such as was proposed in Louisiana Maryland, Nebraska, Oklahoma and Vermont.

The ability to influence the types of investments made isn’t limited to the OZ incentive.

For example, Wisconsin enacted a state LIHTC in 2018, but only for properties that use 4 percent federal LIHTCs and bonds. This focus is a nod to the fact that the federal 4 percent LIHTC and the tax-exempt multifamily private activity bonds that generate them are undersubscribed and there is a great opportunity for developers to use the non-competitive incentive to build affordable housing–as long as there is a state subsidy to fill the financing gaps. Wisconsin’s state LIHTC program directs developers to 4 percent LIHTCs. That way Wisconsin is more likely use its private activity bond cap, rather than have it expire after three years.

The HTC and NMTC state-level incentives similarly can be used to attract equity capital to that state and encourage the development of certain types of properties. Wise lawmakers find ways to enhance the federal incentive with a state incentive that allows them to influence the types of projects that they want in their jurisdiction.

As seen above, state tax credits don’t need to be a carbon copy of the federal incentive, although many share important attributes. Most state LIHTCs follow federal regulations, a practical consideration borne from the complexity of regulations and the broad need for gap funding in affordable housing.

Similarly, most state HTC programs are based on the federal HTC, although many have a different percentage of qualified rehabilitation expenses eligible for the credit and they may have a different claiming period from the federal five-year period to claim HTCs, which was only recently enacted in the 2017 tax law.

However one consideration is to use a state incentive to motivate and reward parts of the transaction not recognized by the federal incentive. The most obvious of these are proposed state-level OZ incentives that also target non-investor participants, because the investor gets the federal benefits. A proposal in West Virginia to exempt qualified OZ businesses from corporate net income tax and personal income tax for a decade is a prime example of that approach.

The same thing is possible in other federal incentives, most notably the NMTC, where provisions can be made at the state level to benefit the businesses involved in the NMTC-financed property, adding attraction to ensure the desired success of the program.

How to Get State-Level Incentives

What can a proponent of a state-level incentive do to ensure the introduction and successful retention of a community development tax-benefit? The best path is similar to that used to ensure the retention and expansion of federal incentives: visibility and communication.

Members of the NMTC, HTC, LIHTC and OZ communities know that the best way to get support from federal officials is to make sure that they know of the benefits and visit properties or businesses financed by the incentives. A member of Congress who sees the LIHTC-, HTC- or NMTC-financed property or business in his or her state or district has more reason to promote continuing and expanding those programs.

The same thing is true on a state level, but perhaps with greater impact. Elected officials who see how the federal incentives make a difference in their districts will be far more likely to promote a state-level version to encourage more development. Those who see the benefit of the state incentive will push to protect or expand it.

Wise local advocates spend time educating officials on how the incentives work and then make sure to show them success stories.