SWISS KRONO Group, one of the world’s leading manufacturers of wood-based materials, continues to invest in rural Barnwell, S.C.

The Swiss-based company is building a 250,000-square-foot expansion on its existing Barnwell manufacturing facility, with help from the New Markets Tax Credit (NMTC) program.

“The purpose for the expansion was for backward integration, which will allow SWISS KRONO USA to produce the board currently purchased for manufacturing laminate flooring (reduction in costs) and to move into new markets,” said Robert Dichiara, vice president and chief financial officer of SWISS KRONO USA. “Our plan is to increase our market share of laminate flooring sold in the U.S. at the expense of imports. … Two-thirds of our new high density/medium density panel production will be used in our existing flooring operations and one-third will be sold into furniture manufacturing, automotive, cabinet and other applications.”

Deborah La Franchi, president of the National New Markets Fund, said the expansion is expected to create 105 new permanent jobs and 500 construction jobs. She added that the permanent jobs will have an average salary of $56,000 per year with health insurance and 401(k) matching funds.

“In 2015, [Barnwell County] had the eighth-lowest average weekly wages in South Carolina, the quality of the jobs being created was very important in our decision to invest,” said La Franchi. National New Markets Fund is one of four community development entities (CDEs) providing a NMTC allocation to this development.

Those permanent and construction jobs are needed in Barnwell, which has a poverty rate of 17.4 percent and an unemployment rate of 14.4 percent, according to the Tax Advantage Group, which was SWISS KRONO USA’s consultant on the expansion. Furthermore, Barnwell is located in a South Carolina Low-Country Promise Zone, a federal program that gives high poverty communities opportunities to increase economic activity and leverage private investment; a FEMA disaster area; and a State Enterprise Zone, according to the Tax Advantage Group.

“Barnwell is an area of rural South Carolina that has not seen the recent economic gains the rest of the state has and helping this area’s existing employers expand and grow is an important part of turning that around,” said Peter Byford, NMTC program senior manager at Tax Advantage Group.

SWISS KRONO USA’s expansion will have an economic ripple effect across the region.

The company will source its wood products locally, which will bolster the local timber industry. Previously, SWISS KRONO USA purchased all of the high and medium density fiberboard it used from out-of-state sources, which Barbara Ellenberg June, general counsel at SWISS KRONO USA, said costs about $6.5 million annually in the transportation of materials. Now, June said, the wood used at this facility will come from within a 75-mile radius.

In addition to its direct job creation, The Innovate Fund, another of the four CDEs in the transaction, estimates the expansion could create 375 indirect/induced permanent jobs in the region. “The biggest attraction to us was this brought quality jobs to the area,” said Jamise Goodman, senior vice president, NMTC relationship manager at SunTrust Bank, which was the NMTC equity investor and a CDE in the transaction. “Eighty-six percent of the jobs are available to low-income people.”

SWISS KRONO USA, which has operated in Barnwell since 2005, has 167 employees (pre-expansion) and is among the county’s largest employers.

SWISS KRONO USA runs an apprenticeship program in partnership with local high schools and Apprenticeship Carolina, a division of the South Carolina Technical College System. It also has a college co-op program where it collaborates with local and surrounding technical schools to provide programs that align with the skills and trades utilized in their operations, according to The Innovate Fund. Such workforce development programs are critical to enhancing the quality and accessibility of jobs to local community residents.

Construction of the expansion began in January 2017 and is expected to be complete by mid-2019.

NMTCs played a vital role in financing the expansion of the Barnwell facility. Four CDEs came together to provide $45.3 million in NMTC allocations.

National New Markets Fund provided a $17 million NMTC allocation. “This company has made nearly a half-billion-dollar ($430 million) investment in this community since first locating to Barnwell, S.C.,” said La Franchi of the National New Markets Fund, a CDE that invests in manufacturing companies in the South and Midwest. “This new expansion plants their roots even deeper into the Barnwell community. The high expansion costs could have precluded this project from occurring–as it was put off multiple times for that reason. We appreciate SWISS KRONO making this level of financial commitment to increase their economic impact in the community.”

The Innovate Fund provided an $11.3 million NMTC allocation. “This development is a big deal in the small town of Barnwell, S.C.,” said Whitney Ferguson, NMTC program manager of The Innovate Fund. “To help a local company expand, while improving income levels through the creation of quality jobs, made perfect sense for The Innovate Fund’s allocation. Currently, South Carolina ranks 45th in the nation in per capita income.”

Tammy Propst, president of Tax Advantage Group and operating officer of The Innovate Fund, said two challenges for The Innovate Fund in closing the investment were working with a foreign-owned qualified active low-income community business and working with multiple CDEs on the NMTC piece of the capital stack–both of which added significant time and complexity to the closing process. The Innovate Fund focuses its allocation on developments in South Carolina that improve income levels throughout the state.

Dakotas America provided a $10 million NMTC allocation. “Obviously, the number of jobs created is a big deal,” said Van Hofwegen. “The 605 permanent and construction jobs is incredibly impactful in an area with a 14.4 percent unemployment rate.” While Van Hofwegen was pleased with the high number of direct jobs, it was the indirect and induced jobs that caught her attention. “Particularly in rural projects, the impact of indirect and induced jobs can be even greater than the impact of the direct jobs. The indirect and induced impacts are often more obvious in rural communities.”

SunTrust provided a $7 million NMTC allocation and was the sole NMTC equity investor, providing $14.5 million in NMTC equity. “We brought NMTCs as a way to fund the significant expansion of the existing facility in Barnwell,” said Leutzinger. “This expansion will help SWISS KRONO USA reduce costs and its carbon footprint, as well as create demand for the local timber industry–85 percent of the wood will be harvested locally.”

“Helping an existing manufacturer expand in rural South Carolina is a great use of the NMTC program,” said Brad Elphick, CPA and partner in the Atlanta office of Novogradac & Company LLP, who prepared a financial forecast for the transaction, as well as an agreed-upon procedures report for the borrowing entity. “This expansion will have a long lasting impact on the community with its direct and indirect job creation.” 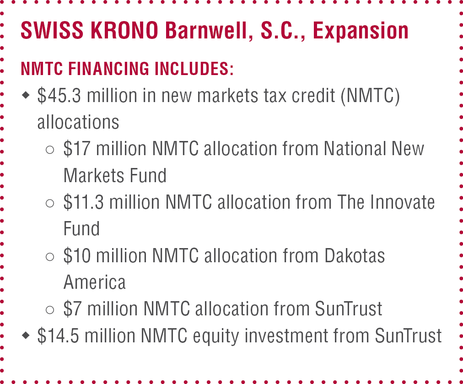