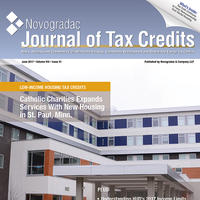 Since Novogradac & Company began analyzing the relative balance of housing incentives in the federal tax code, homeowners have received substantially all the benefits–and our recent analysis reveals the trend continues.

According to Novogradac’s analysis of a recent report by the Joint Committee on Taxation (JCT), as more fully explained below, federal tax subsidies for homeowners will outpace rental tax subsidies by a rate of 10-to-1 for the five-year period of 2016-2020.

It isn’t surprising that homeownership receives more subsidies than rental housing, as the United States has more homeowners than renters. That ratio is nearly 2-to-1, meaning about 64 percent of households that are homeowners receive more than 90 percent of the tax subsidies for housing in the code. It is also worth noting that the median household income for homeowners is $71,027 per year, roughly twice the median renter income of $35,863 per year, according to the latest American Community Survey from the U.S. Census Bureau. The bottom line is homeowners have much higher incomes than renters, yet receive substantially all of the benefits for housing embedded in the tax code.

From a relative need perspective, the extreme imbalance is obvious and not going away. The gap between homeowners and renters was highlighted by a recent report by the National Low-Income Housing Coalition that said the United States has a shortage of 7.4 million affordable and available rental homes for extremely low-income (ELI) renters alone (ELI households earn no more than 30 percent of the area median gross income or the federal poverty line). That shortage is felt everywhere–there is a need for ELI housing in every state, with just 35 affordable and available units for every 100 ELI renters nationwide.

To reach a proportionate allocation of tax subsidies based on the rate of homeownership, renter tax subsidies would need to increase nearly $300 billion over a five-year time frame. Congress could at least make a nod toward reducing this imbalance by approving the Senate version of the Affordable Housing Credit Improvement Act of 2017 (S. 548).  If S. 548 were approved, rental housing would receive about $250 million in extra subsidies over the next five years, according to a JCT estimate (the gradual increase in low-income housing tax credit [LIHTC] allocations in the proposed legislation is estimated to cost a mere $4.1 billion over 10 years).

That would enhance the supply of affordable rental housing, as the legislation would create and preserve hundreds of thousands of apartments over a decade. The bill has a way to go before becoming law, but it’s the right direction to help begin to address the imbalance in the tax code.

The Congressional Budget and Impoundment Control Act of 1974 requires the JCT to annually measure tax expenditures, which are defined as any reduction in income tax liability that results from special tax provisions or regulations that provide tax benefits to a particular taxpayer.

For the five-year period of 2016-2020 (the years covered in this year’s report), the JCT reports that federal tax expenditures for homeowner subsidies will amount to $715.6 billion.  Note, this estimate doesn’t include the $540 billion cost for the exclusion of net imputed rental income, an estimate provided by the Office of Management and Budget (OMB) as a part of the FY 2017 budget request.

Four of the six homeownership categories included increased since a 2014-2018 report was issued two years ago, when the total subsidies for homeowners was $746.9 billion. The drop in total cost is primarily accounted for by a decrease in $48.2 billion in the mortgage interest deduction–which is presumably due, among other factors, to the lower number of homeowners and changes in interest rates.

We use the 2014-2018 report as a benchmark as opposed to the 2015-2019, since two categories (non-recognition of discharge of mortgage indebtedness and deduction for qualified mortgage insurance premiums) were excluded in the 2015-2019 version of the report because legislation wasn’t in place to extend them at the time that report was published. 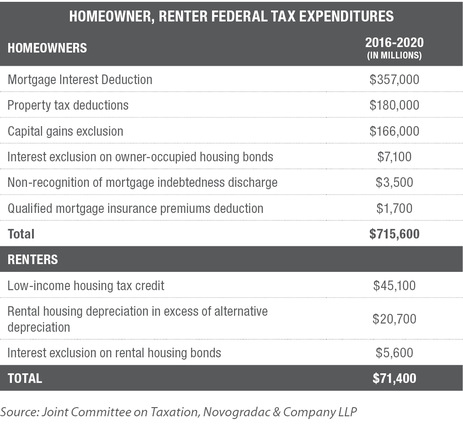 Two items that could be considered expenditures are omitted from our list. First is the OMB calculation for the cost of the passive loss exception for individuals, primarily because it applies to all real estate, not just housing. The passive activity rules also limit the ability of taxpayers to deduct losses and claim credits from residential rental businesses–which means it’s a revenue-raiser rather than tax expenditure.

Similarly excluded from this analysis was the JCT’s calculation of $5.9 billion in foreign housing exclusion and deduction for individuals, since it’s unclear how much this benefits homeowners versus renters.

When addressing appropriations and direct spending, the ratio between homeowner and rental subsidies appears relatively more balanced. Part of that stems from the difficulty in estimating the value to homeowners from such government-sponsored entities as Fannie Mae and Freddie Mac, as well as the complication in understanding spending that benefits both renters and homeowners–in which category, for instance, do you include funds spent to help renters prepare for homeownership? And in what category do some of the Community Development Block Grant (CDBG) and other community development funds go, when it’s not obvious whether they’re for homeowners or renters?

With the prospect of comprehensive tax reform continuing, it’s time to consider narrowing the gap between tax subsidies that benefit homeowners and renters–both for practical and demographic reasons. One illustrative statistic from the Pew Research Center shows that in 1981, nearly 56 percent of 25- to 35-year-olds lived in owner-occupied housing other than their parents’ home. In 2016, only 37 percent of the Americans in that same age group did.

That tracks with general homeownership trends, which show a decade-plus drop in America. According to U.S. Census Bureau data, 63.6 percent of Americans owned their homes as of the first quarter of 2017–a majority, but a shrinking majority. The slide has been steady since 2004, when the nation hit its homeownership peak of almost 70 percent. In fact, the current homeownership rate is the lowest since 1985 and has dropped 1.6 percent in the past five years. The share of homes purchased by first-time homeowners is at its lowest level in 27 years, reflecting the difficulty of the millennial generation to buy homes.

Last year’s “The State of the Nation’s Housing” report by the Joint Center for Housing Studies at Harvard University and Enterprise predicts the coming decade will feature even more demand for rental housing as the ongoing slide in homeownership among those in their 30s and 40s combines with the rental demands of aging baby boomers to push demand for affordable, accessible apartments.

Homeownership is declining in America and the federal government support for it continues to dramatically outstrip that for building and residing in rental housing. Now is a time to narrow the gap between federal expenditures used to encourage homeownership and those used for rental housing.

President Donald Trump’s initial steps didn’t head this way. His fiscal year “skinny budget” request, issued in March, cut funding to the U.S. Department of Housing and Urban Development and U.S. Department of Agriculture housing programs. Meanwhile, the outline of the Trump tax reform plan released in April included a continuation of the mortgage interest deduction, one of the most popular tax deductions in America. Since the mortgage interest deduction accounts for roughly half the federal expenditures on homeownership, the owner-renter gap will likely continue, but the inequality doesn’t need to remain as large.

The best tax code is fair and reflects reality. In 2017 America, reality is that the share of us who rent continues to grow, yet the tax code favors homeowners by a large margin.

The tax code should reflect the new reality: Decrease the gap between subsidies for homeowners and rental housing.