Tax Credit Equity Pricing– What Does the Future Hold? 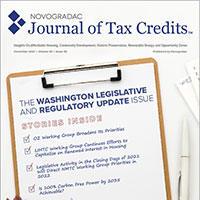 As President Joe Biden’s Build Back Better plan works its way toward enactment, the likelihood of a significant increase in the supply of federal community development tax credits has stakeholders pondering tax credit equity pricing in 2022 and beyond.

If enacted, the tax credit expansion provisions of the Build Back Better Act (BBBA) would most certainly lead to a greater aggregate supply of tax credit equity, which would lead to more financial support for more community development businesses and projects. That said, as individual transactions are structured and underwritten, the per-tax-credit equity pricing translates into the per-transaction sources of tax credit equity.

All things being equal (as they say in economics), an increase in the aggregate supply of tax credits would create downward pressure on tax credit equity pricing. But, all things are never equal.

Let’s start with potential changes in the supply of community development tax credits.

As this column went to press, the House of Representatives had approved the BBBA, which includes provisions to increase many federal community development tax credits–particularly for housing and renewable energy–beginning in 2022. Should the Senate approve the measure and the BBBA become law, 2022 would see a major increase in the supply of credits.

The BBBA includes a proposed extension to 2032 of the phasedown period for the ITC and PTC along with an increase in the credit rates. That would increase the annual supply of these tax credits, although the direct-pay option (discussed later) would reduce the amount of these tax credits seeking equity investors.

Provisions in the BBBA would increase the supply of both 9% and 4% LIHTCs.

A four-year, 12.5% annual increase in 9% LIHTC allocation is scheduled to end this year, but the BBBA proposes to preserve that increase through 2024 along with an additional annual increase.

Another significant provision in the BBBA would temporarily lower the 50% test for private activity bond (PAB)-financed homes to 25%, which would free bond cap. The result would be an increase in the use of PABs and 4% LIHTCs–particularly in states that are cap-constrained. In those locations, the use of PABs and 4% LIHTCs could eventually increase by 100% or more. In addition, the BBBA contains a proposal for a 50% basis boost for extremely low-income properties, which would make such housing eligible for additional credits.

A new housing tax incentive, the neighborhood homes tax credit (NHTC), is included in the BBBA. The NHTC would be used for the construction or rehabilitation of owner-occupied homes in distressed neighborhoods and would result in slightly more than $1 billion in annual credit allocation for 2022, 2023 and 2024, going up to $2.2 billion in 2025 before expiring.

The BBBA includes a $175 million addition to the existing $5 billion annual pool for 2022-2025 in tribal statistical areas, a 3.5% increase in annual allocation authority. An early provision in proposed reconciliation legislation–which fell out of the legislative language, but could conceivably be part of year-end legislation–would make the NMTC permanent, index the annual amount for inflation, add a supplemental allocation for the next two years and add $100 million in allocation for U.S. territories.

The Historic Tax Credit Growth and Opportunity (HTC-GO) Act was in BBBA draft legislation, including a temporary increase from 20% to 30% of qualified rehabilitation expenditures and a permanent increase of that percentage for small projects. Although those HTC provisions fell out of the BBBA, they still could be attached to year-end legislation, paving the way for more credits in 2022.

Among the renewable energy direct-funding provisions included in the BBBA are billions of dollars in grants and other funding that would be made available to various green energy properties. The use of those grants would make more properties financially feasible and more likely to use ITCs, PTCs or other renewable tax credits, thus increasing the supply.

The BBBA also included $156 billion in additional funding for housing and community development spending–topped by $65 billion for public housing. The bill also included $15 billion for the national Housing Trust Fund and $10 billion for the U.S. Department of Housing and Urban Development (HUD) HOME program. Both are huge jumps and provide gap funding to allow more affordable housing properties to be financed by tax credits.

Another gap funding source is the Community Development Financial Institution (CDFI) Fund’s Capital Magnet Fund (CMF), which will soon announce the allocation of $386 million in grants to CDFIs and nonprofit organizations for affordable housing and related economic development and community services. The BBBA would provide an additional $750 million to the CMF for 2022, which would be paired with an expected $300 million-plus in allocation from Fannie Mae and Freddie Mac.

Factors that Will or Could Reduce the Supply of Tax Credits

While most signs indicate an increase in community development tax credits in 2022, there are factors that will or could result in decreases.

More than $2 billion in disaster LIHTCs ($1 billion to fire-ravaged California) were authorized by Congress for 2020, 2021 and 2022–one-time allocations that will create a practical decrease in supply as they are used. The BBBA, if enacted, would extend the 12.5% annual increase in 9% LIHTC allocation beyond 2021. But if the BBBA is not enacted, affordable housing stakeholders face the looming end of that increase in allocation.

Renewable energy stakeholders face a similar situation. The PTC is slated to drop from 60% of the applicable rate in 2021 to zero in 2022, barring the BBBA’s proposed extension at 100% through 2031. Similarly, the solar ITC is slated to remain at 26% through 2022, then drop to 22%. The BBBA proposes an extension of the ITC at 30% through 2031, but without the legislation, solar credits will be reduced.

Renewable energy tax credits are in line for a dramatic jump if the BBBA is enacted, but BBBA also includes an elective payment option for credits, which means a developer could retain tax credits and receive a refund from the IRS. That would likely have a positive effect on the number of properties that make financial sense, but would decrease the amount of credits otherwise available for wider investment.

Factors That Could Increase Investor Demand for Tax Credits

While the market could see more credits available for equity investment–which often results in lower equity prices–there remain factors (both for specific tax credits and overall) that could increase demand, a factor that creates pressure for an increase in equity prices. 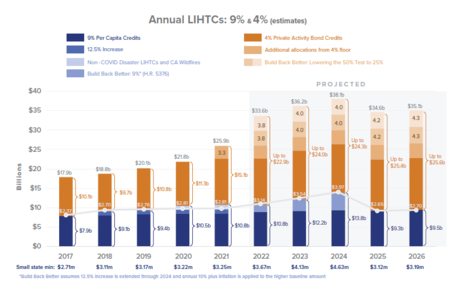 Some overarching issues could create incentives to invest in community development tax credits. While the purpose may not be to affect equity pricing, these elements could raise demand.

Meanwhile, broad factors that were considered in the past appear to be off the table for 2022:

There are tax-credit-specific issues that could increase demand:

Government-sponsored entities (GSEs) Fannie Mae and Freddie Mac both increased their annual equity investment in the LIHTC arena, jumping from $500 million to $850 million in 2021. That will increase competition for the credits, which generally increases equity prices. Beyond that, it is possible the Federal Housing Finance Agency (FHFA) may further increase the annual GSE LIHTC investment cap.

One of the key proposals in the New Markets Tax Credit Extension Act of 2021 is to allow the NMTC to offset the alternative minimum tax (AMT), which is currently allowed for most other federal tax credits. Allowing the NMTC to offset the AMT–which could be part of year-end legislation, along with other provisions in the NMTC Extension Act–would potentially open the incentive to individual investors, expanding the number of potential investors and demand.

A key provision in the HTC-GO Act–portions of which could be included in year-end legislation–is the elimination of the basis adjustment. That provision–which would mean that the amount of the HTC would no longer be deducted from the building’s basis–would increase the tax benefits of investing, thereby increasing demand for the HTC.

There are also factors that could play a role in decreasing demand across all community development incentives, a force that exerts downward pressure on equity pricing. For example, looming over all the tax credits is the impending phaseout of bonus depreciation, which is currently set to drop from 100% for the year placed in service to 80% in 2023 and decreasing each year thereafter until it hits 0% in 2027. If the phaseout remains in place, demand and equity pricing–particularly for LIHTC and RETC developments–would likely decrease.

Factors that Could Increase or Decrease Demand for Tax Credits

There are myriad situations that could either increase or decrease the demand for tax credits. These factors could affect investors directly and make current equity pricing more or less competitive as compared to other investment opportunities. Here are four examples:

Proposed legislation, government spending, regulation changes, the state of the economy and more affect the supply and demand for community development tax credits.

Help Rewriting QAPs Provides Opportunity for Clarity, Simplification
Rising Stars: Novogradac Spotlights Younger Leaders in Community Development
ESG Investing: Where it is Now; Where it’s Headed; What to Do
END_OF_DOCUMENT_TOKEN_TO_BE_REPLACED