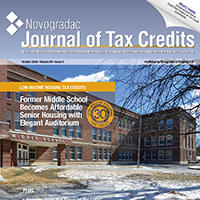 By most accounts the low-income housing tax credit (LIHTC) pioneers didn’t fully know what they were creating 30 years ago, when they wrote and shepherded legislation that launched America’s most successful affordable housing program.

“It’s a case of sometimes you work on issues … and they turn out to be a lot more consequential than you thought at the time,” said Bobby Rozen, a longtime affordable housing advocate who in 1986 was the tax legislative counsel for Sen. George Mitchell, D-Maine.

Rozen wasn’t alone: When the landmark bill was enacted Oct. 22, 1986–as part of the watershed Tax Reform Act of 1986–the attention was on the simplification of the tax code and the elimination of many tax shelters.

“[The LIHTC] wasn’t the driving force. The driving force was to end tax shelters, create lower rates and there were major issues with foreign taxes,” said Jon Sheiner, then a legislative assistant to Rep. Charles Rangel, D-N.Y. “The credit was a big issue for people in housing or tax shelters, but that’s it.”

Buzz Roberts agreed. Today Roberts is the president and CEO of the National Association of Affordable Housing Lenders, but in 1986 he was a consultant for the Local Initiatives Support Corporation (LISC). “Hardly anybody noticed it,” Roberts said. “There were just a handful of [Congressional] members who paid attention to it.”

In the 30 years since enactment, nearly 3 million housing units have been built with LIHTC equity, 3.1 million jobs have been created and an industry has grown around it. But to understand how the LIHTC passed, it’s important to go back to the political climate of the time.

‘Tax Shelters were out of Hand’

By the mid-1980s, there was a growing feeling that many wealthy people were using tax shelters–including investment in affordable housing–to escape paying their fair share of taxes. At the same time, many felt tax rates for the highest-earning Americans were too high. President Ronald Reagan’s solution was to push for tax reform that would lower the top individual tax rate and eliminate most shelters. Reagan demanded that changes be tax-revenue neutral–which led to a yearlong process in both houses of Congress to craft the Tax Reform Act of 1986.

The sweeping bill to reform the tax code was introduced in the House, but the approach to affordable housing differed between the chambers of Congress. In the House, tax reform legislation retained tax shelters, while Rozen and his boss crafted the idea in the Senate of a tax credit for investing in affordable housing.

The overall legislation went through several adjustments (ultimately, there were 245 actions taken on it) and the LIHTC flew under the national radar. “In 1986, we were doing this on the run, without a lot of forethought, time and full understanding of what we were doing and whether it would be a success,” Rozen said.

The Senate came up with the LIHTC. Then it hit major obstacles.

“The Joint Committee on Taxation [JCT] hated tax credits and they were determined to make sure [the LIHTC] didn’t work,” said Bart Harvey, longtime CEO of Enterprise Community Partners and an early supporter of the LIHTC. “Their position was that they didn’t want credits … They didn’t want rich people to use tax deductions to lower their tax bills because there was a lot of populism against millionaires not paying taxes.”

The broad tax-reform bill had bigger targets, but those in affordable housing knew the end of affordable housing tax shelters could devastate a shaky industry. The Senate bill, shepherded by Mitchell and Sen. Robert Packwood, R-Ore., added the LIHTC. The House bill lacked it.

“The House sort of wanted more of the same,” said Roberts. “When we talked to the House Ways and Means people, the staff’s hostility to low-income housing was intense … It was considered a rip-off. The Senate was where we first had an opportunity.”

Harvey remembers LIHTC supporters hitting barriers. “There was a lot of bartering and we lost on every point,” he said. “You had to keep it 15 years. There was penalty and recapture. It was written about as unwieldy as you could make it. They actually made it impossible to use for qualified investors for private placements. That had been the basis of the previous market.”

Ultimately, the legislation including the LIHTC passed the Senate. “From my perspective, it was due to the dogged determination of Sen. Mitchell,” said Rozen. “He was one of six senators on the Finance Committee who put the bill together and he was in a good position to take it from the embryonic bill, make changes on the Senate floor and in conference. He gathered important support from important senators.”

Roberts remembers iconoclastic Sen. Howard Metzenbaum, D-Ohio, questioning the LIHTC on the Senate floor. During a quick break, Mitchell and Sen. Bill Bradley, D-N.J.–“considered the Senate Democrats’ arbitrator of what was fair or foul for tax reform,” according to Roberts–met with Metzenbaum. “They calmed Metzenbaum down and it passed,” Roberts said. “I remember that moment vividly.”

But the House of Representatives remained.

‘The Price for Concession’

“The House didn’t by any means immediately embrace it,” Rozen said. That led to negotiations. Despite Reagan’s support, many Republicans resisted. “President Reagan brought some House members over,” Sheiner said. “A handful of Republicans voted for the bill.”

There were also special allocations to secure the support of the three most influential members of the House: Speaker Tip O’Neill, Ways and Means Committee Chairman Dan Rostenkowski and Ways and Means Member Rangel. “A deal got cut–Chicago, New York and Boston got extra [specific] allocations,” Rozen said. “That was the price for the concession.”

After differences in the versions of the legislation were ironed out, the House passed the bill Sept. 25, the Senate followed two days later and Reagan signed it Oct. 22, 1986. The tax reform act passed and the LIHTC was part of it–initially for three years.

With affordable housing-based tax shelters largely gone and a new, untested tax credit in place, the initial reaction was largely negative. “Everybody complained. No one knew how it would work,” said Sheiner. “They thought it would put nonprofit [developers] out of business.”

Rozen has a similar memory. “At the beginning, we heard a lot of discordant voices in the industry,” Rozen said. “People wanted to know what we had done. State agencies didn’t really have multifamily housing capabilities. They had only issued mortgage revenue bonds and now they were involved.”

Roberts recalls a near-universal dislike of the LIHTC. “I remember talking to people after it was enacted and the overwhelming reaction was skepticism and disinterest,” he said. “Most of the industry thought it was a dumb idea.”

Part of the problem was that the JCT anticipated little interest in the tax credit. “They were sure that corporations wouldn’t want ‘slum property.’” said Harvey. Even insiders were unsure. “I wasn’t crazy about it,” said Sheiner. “It was so unknown, but it was politically necessary to do it. Tax shelters were dead.”

Some of the skepticism was warranted. While the LIHTC took off quickly, it didn’t really become recognizable until the Mitchell-Danforth Tax Force proposals on the LIHTC were enacted three years later.

“Really, the 1989 legislation created what we have today,” Rozen said. “There was very little use in 1987 and there were some embarrassments. Then we had the Mitchell-Danforth tax force.” As examples, Rozen cited the 1989 addition of the requirement for qualified allocation plans (QAPs), the requirement to do feasibility analysis, creating competition for the credits and the extended-use period.

‘We Hoped it Would Work’

Three decades later, those involved are proud of their work on the LIHTC’s birth and frank about their original skepticism. “We hoped it would work,” Rozen said.

Ultimately, it was the mountaintop moment for Rozen.

“I worked for the Senate Majority Leader and was involved in a lot of major legislation, but I would say the LIHTC is the legacy I’m most proud of and the only one I’m still involved in,” Rozen said. “I think it’s probably the most effective in helping people out.”

The creation was sometimes messy, but the result was good.