Trump Administration Should Use Tax Credits to Create Jobs, and Invest in Infrastructure

Published by Michael Novogradac on Tuesday, May 2, 2017 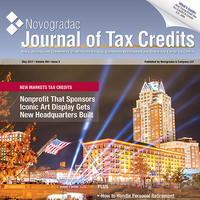 Donald Trump won the 2016 presidential election partly on the promise of rebuilding America’s infrastructure and boosting American employment–especially in communities slow to rebound during the economic recovery. To achieve a legislative landmark that accomplishes both of these goals, President Trump should continue to look to federal income tax credits.

A version of a Trump-endorsed infrastructure plan–of which tax credits were crucial–was pitched in October 2016 by Peter Navarro and Wilbur Ross. Navarro, who became the head of Trump’s National Trade Council, and Ross, who became Commerce secretary, proposed that $137 billion in tax credits could leverage enough investment to make a $1 trillion package viable. Three months later, following his surprising win in the general election, Trump still was heralding an infrastructure plan, albeit without specifics.

“We will build new roads and highways and tunnels and airports and railways across the nation,” Trump told Republican lawmakers in a mid-January retreat. That theme continued through Trump’s first speech to Congress Feb. 28, when he said, “The time has come for a new program of national rebuilding,” prompting loud and long applause.

Few dispute the need for infrastructure improvement. The American Society of Civil Engineers estimate a gap of more than $2 trillion between current funding and the nearly $4.6 trillion it would take to improve U.S. infrastructure to an acceptable level.

The combination of infrastructure improvement and job-creation is a double-punch that is attractive to both Republicans and Democrats. The broad-based support makes the issue different from other high-profile goals of the Trump administration. Unlike the efforts to repeal and replace Obamacare or the plan to dramatically reduce the corporate tax rate, infrastructure improvement is attractive to both parties–albeit with some substantially different approaches.

Those differences were most obvious in January, when the Democrats released their own version of an infrastructure plan, which they said would create 15 million jobs.

A summary of the bill said it would provide $210 billion in federal funding for road and bridge repairs, as well as an expansion of the U.S. Department of Transportation TIGER grant program, which Trump proposed to eliminate in his budget request. It would include $180 billion for rail and bus systems; $110 billion for water and sewer programs; $70 billion for airports, waterways and ports; and $100 billion for energy infrastructure. The Democrats’ plan would also set aside $200 billion for unspecified new vital infrastructure projects, as well as increasing funding for the low-income housing tax credit (LIHTC) and new markets tax credit (NMTC).

The plan gained little traction among Republicans–as it would need in order to gain serious legislative momentum–because House Speaker Paul Ryan, R-Wis., and other leaders said they wouldn’t support an infrastructure proposal that relies only on federal direct spending. Still, the proposal highlighted that infrastructure is an area where the Republicans and Democrats have common ground, even if the ground that looks dramatically different.

As opposed to pursuing the Democrats approach, the president could turn to the tax code to implement the plan–with the advice and consent of Congress, of course.

In the days following the high-profile failure of the House of Representatives to repeal and replace Obamacare, much focus shifted to tax reform. The possibility of attracting Democrats to the GOP side on the issue led to consideration of the infrastructure plan being linked with comprehensive tax reform, just as there were similar discussions in 2015.

Part of that comes from the Republicans wanting a significant legislative victory. But part comes from a Senate rule that looms over any tax reform discussion.

Under a budget procedure known as the Byrd Rule, permanent changes to the tax code require a 60-vote minimum if they are projected to add to the federal deficit beyond 10 years. Most observers consider long-term revenue neutrality–the term to describe legislation that doesn’t add to the deficit beyond a decade–as difficult to achieve if tax reform includes steep tax rate cuts without compensating changes in tax law and budget scoring rules. Since Republicans hold only 52 seats in the Senate, tax reform will require at least eight Democrats (or Independents, who generally vote with the Democrats) to support a plan that is not revenue-neutral beyond 10 years.

Of course, one option is to pass a tax plan without revenue neutrality–which would likely mean that many or, possibly most, tax-cutting provisions in the tax-overhaul plan would be limited to 10 years. Many Republican leaders voiced opposition to this, since they desire to make permanent changes to the tax code.

Consider this: One issue that would likely woo some Democrats and make a 60-vote threshold possible (although it might dissuade some Republicans) is the inclusion of an infrastructure plan–probably with tax credits–in a tax overhaul plan.

Bipartisan agreement at this time appears to be a significant stretch. But it’s possible.

The Trump administration’s mid-March budget request, which cut $6 billion in funding for the U.S. Department of Housing and Urban Development (HUD), brought a strong reaction from affordable housing community. But then came some words of optimism: Ben Carson, the HUD secretary, told attendees at the National Low Income Housing Coalition conference in Washington, D.C., that the Trump administration would include housing funding as part of an infrastructure spending bill.

“The part that people are not hearing even though I’ve said it several times is that this administration considers housing a significant part of infrastructure in our country,” Carson told housing advocates. “And as such, the infrastructure bill that’s being worked on has a significant inclusion of housing in it.”

As anyone familiar with tax credits knows, some of America’s most successful job-creators and investments in infrastructure are supported by existing tax credits–tax credits that would benefit from an increase or extension and enhancements. Should Trump choose to use the tax code to boost jobs and infrastructure investment, there are some obvious starting points.

Beyond consideration as an infrastructure investment, affordable housing–particularly in the form of the LIHTC–is a longtime, proven job creator. The National Association of Home Builders estimates that about 95,700 jobs are created by the LIHTC in typical year and the expansion of the LIHTC–including the 50 percent boost proposed by Sen. Maria Cantwell, D-Wash.–could fit in a jobs-first proposal for the president. Trump could easily frame the proposal as a way to create tens of thousands of jobs every year while meeting a significant social need. In doing so, Trump would join not only affordable housing advocates, but Republicans such as Sen. Orrin Hatch, the chairman of the Senate Finance Committee, who co-sponsored the LIHTC expansion bill last year with Cantwell.

Similarly, a permanent extension of the NMTC could be framed as both an investment in infrastructure in America’s hardest-hit communities and as a proven job creator. The New Markets Tax Credit Coalition reports that about 70,000 jobs are created every year by the investments made through the NMTC program–and permanently extending the credit, which is now slated to expire at the end of 2019, would be a jobs boon.

The federal historic tax credit (HTC), which Rutgers University’s Center for Urban Policy Research says created more than 100,000 jobs in 2016, is the subject of the Historic Tax Credit Improvement Act of 2017. That legislation would make several adjustments to the HTC and would increase its jobs impact–particularly in small, midsize and rural communities.

There are other options. But in his first few months as president, Donald Trump learned what Washington insiders, affordable housing advocates and community development champions have known for years: there are few straight-line solutions, but when you look to encourage investment and job-creation in desired areas–whether it’s the rebuilding of roads and bridges, the expansion of affordable housing, the permanence of community development programs or the encouragement of historic preservation–tax credits are an effective tool for financing infrastructure.