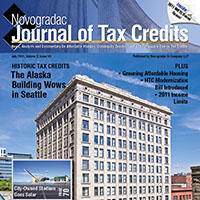 Once again, HUD is applying a floor and ceiling to any increases or decreases. It has limited all annual decreases to no more than 5 percent, and limited all annual increases to 5 percent or twice the percentage change in the national median family income, whichever is greater. Therefore, since 5 percent is higher than twice the increase in the national median family income, the 2011 increases to the very low-income limit were limited to 5 percent. There were 27 metropolitan areas where the decrease was limited to 5 percent and 72 metropolitan areas where the increase was capped at 5 percent. Some properties might see increases in the overall income limit greater than 5 percent if they qualify for the HERA Special income limit, described in greater detail later in this article.

MTSPs and HERA
HUD’s published MTSP chart does not take into account any hold harmless policy. The hold harmless rule is now applied on a project-by-project basis pursuant to Internal Revenue Code sections 42 and 142; all projects’ rent and income limits are held harmless, but only from the point at which they place in service (or for rents, in the year they receive a carryover allocation for 9 percent credits or a tax credit reservation for 4 percent credits with tax-exempt bonds). So even though each project’s income and rent limits can never go down, other projects in the same area can have lower income and rents limits than prior projects placed in service because new projects have to start with the income limits in effect (which could potentially be lower than previous years’) and then are only held harmless from that point on.

Because HUD is no longer holding Very Low Income (VLI) harmless for Section 8 purposes, there is the potential for a county’s VLI to be less than the year before. In fact, there are 871 counties whose income limits decreased before any hold-harmless provisions were applied. However, the 2008 Housing Economic Recovery Act (HERA) established a general hold-harmless rule for low-income housing tax credits (LIHTCs) that says: “Any determination of area median gross income under subparagraph (B) with respect to any project for any calendar year after 2008 shall not be less than the area median gross income determined under such subparagraph with respect to such project for the calendar year preceding the calendar year for which such determination is made.” Therefore, an LIHTC project should check prior years’ charts to ensure they use the higher limit.

As was the case last year, the MTSP charts will list two separate income limits for counties that have a HERA Special income limit:

Very Low Income — an income limit based on the VLI limit. The HUD published MTSP 50 percent limit is equal to the traditional HUD VLI limit.

HERA Special — an income limit for projects that were in service prior to January 1, 2009 and that is based on the calculation found in Internal Revenue Code Section 142(d), which allows the income limit to increase by the percentage increase in the actual area median income, before HUD makes adjustments.

Let’s look at the following example.

To determine the 2013 income limits, the owner must first determine when the property placed in service.

Because the rule as illustrated above is implemented on a project basis instead of a county basis, LIHTC or tax-exempt bond properties in the same county will, potentially, have different rent and income limits. Owners and managers of properties with layered financing will have to track both sets of income limits and be sure they are following all requirements.

The tables on pages 3-5 in the downloadable PDF article show some of the largest increases and decreases in MTSP income limits from 2010. The maps on pages 6 and 7 illustrate these changes for the nation as a whole.