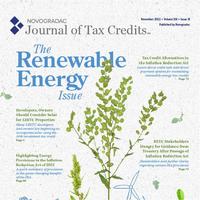 Editor's note: This is the second in a three-part series by the Novogradac Journal of Tax Credits looking at how community development entities measure impact. This second installment focuses on investments relating to environmental issues; the final part in December will focus on health issues. Climate change considerations and racial/ethnic equity will be woven into each article. New markets tax credits can be used to reduce the impacts of climate change, especially for low-income communities, and increase opportunities for communities of color.

This year has seen an amplification of the effects of climate change, from catastrophic flooding in Pakistan to severe drought in China to the United States Bureau of Reclamation mandating drought contingency plans for the Colorado River Basin, a major supplier of water in Arizona, Nevada, California and Mexico, among countless examples across the globe.

As the crisis intensifies, so, too, must efforts to combat it, say leaders of community development entities (CDEs) that allocate the new markets tax credit (NMTC).

“If you’re building a facility and you’re going to put in LED lights, for example, that’s a smart business practice, but at AMCREF we’re striving for a higher level of environmental impact,” said Susan Seagren, president of AMCREF Community Capital, a CDE that focuses on creating jobs as well as substantive environmental benefits in operating businesses that tend to be in the manufacturing or industrial fields. “We’re taking it to the next level.”

AMCREF is one of several CDEs that spoke to the Novogradac Journal of Tax Credits about how investments in environmentally beneficial projects are essential in the fight against climate change, but also that those efforts need to be more than window dressing.

Matt Meeker, a partner in Novogradac’s Dover, Ohio, office, emphasized that this is a moment where investments in renewable resources and other efforts to combat climate change can have a positive impact that is almost impossible to fully measure.

“It is the moment for not just sound environmental stewardship from us all, but also a moment for the business community for boundless opportunity,” Meeker said. “Looking to the next five years, the next 10 years, CDEs that are working in this space have the potential to energize the fight against climate change on a multitude of fronts.”

It’s Not Easy Being Green

Seagren said AMCREF is conscious of “greenwashing,” the process wherein businesses are perceived to put a greater emphasis on reaping the rewards of the appearance of environmental consciousness more than the practice of doing so. Seagren said the, “what if we throw a few solar panels on the roof?” approach is insufficient. AMCREF’s purview extends to innovative, boundary-pushing technologies and products. AMCREF emphasizes this in its underwriting of projects, underlining the emphasis that while technology such as LED lighting might be included in a project, the urgency of the moment demands thinking in bigger terms to enact meaningful impacts to help combat climate change.

“During initial underwriting, we think about how a project will benefit the environmental health of both the community and the employees,” Seagren said.  “Will it reduce air and/or water pollution? Will it result in a better use of the community’s natural resources and/or reduce hazardous waste? How is the business operating in an innovative, cleaner manner which goes beyond the status quo of traditional industries? We strive to direct our scarce NMTC capital to the most impactful projects.”

That’s true as well for Ecotrust, said Sara Pietka, its director of community investments. Ecotrust is a CDE that works primarily in the American West and Pacific Northwest. Its 2020 strategic plan supports work that improves climate resilience, increases stewardship of lands and waters, and builds intergenerational wealth.

Ecotrust’s roots as an organization lie in “triple bottom line” investments that deployed new business models targeting economic, social, and environmental wellbeing. Those investments were weighted toward sustainably managed forestland, and the community benefits of those projects were difficult to explain to the Community Development Financial Institutions (CDFI) Fund.

“We’ve pivoted slightly to what we call the three E’s: equity, environment and economy,” Pietka said. “By assessing potential investments against this framework, we can both better communicate outcomes to the CDFI Fund and ensure that our NMTC investments align with Ecotrust’s strategic plan. … We’re not just looking to check boxes on green features. We’re looking at what sustainability means for the long term.”

While Ecotrust is focused on the western United States, AMCREF seeks to stimulate investment largely in the rural South, in areas that often see a higher poverty rate and less economic activity. Sixty percent of the CDE’s allocations are in rural areas.

AMCREF has an advisory board that also delivers deeper insights into different technological areas, whether it be carbon, biofuels, biomass or others. Energy reduction is another avenue for change, Seagren said. In the case of measuring the impact that comes from modernizing a manufacturing plant, comparing energy bills at different times can be helpful, Seagren said.

In addition to supporting ground-breaking new technologies, Seagren also said AMCREF is interested in traditional businesses that preserve or rehabilitate an older facility to create meaningful reductions in emissions, pollution or waste.

When measuring impact, across the board, Seagren said data is paramount.

Each specific investment requires different metrics for success. For a plant that recycles plastic waste, for example, AMCREF might ask how many tons are expected to be recycled and how the plastic waste is sourced.

“How do a company’s projections compare to actual results?” Seagren said. “It’s similar to job creation: Is the business exceeding the goal established at closing? Did they create 50 jobs as projected? Or just 10? Or 75? Similarly, if a business manufactures solar panels. How many panels did they make in the previous year compared to their projected goal? We strive for quantifiable numbers that make sense and also tie that back to the financial projections of a company.”

The sweet spot for AMCREF combines products that make both environmental and economic sense, companies with a commitment to be greener and make substantive changes, such as those involved in recycling local waste into valuable new products or biodegradable plastics.

Knowing the people and the place of a given investment are paramount. Without awareness and sensitivity about people and places, one CDE, Travois, which serves nearly 110 American Indian, Alaska Native and Native Hawaiian communities and/or organizations, might cease to function.

“Native America in general has the best renewable resources of anywhere in the Americas. There’s incredible access to wind and solar,” Glynn said. “The potential resources are huge if that potential can be realized in way driven or led by the tribe and not just rerun the old, bad playbook of extracting resources in a predatory way, but in a way that puts the tribe in the driver’s seat.”

Glynn said the scope and scale of Travois’ environmental work tends to be on a community scale rather than a utility scale, but that health care, education and other investment opportunities almost have to have a renewable energy component.

The focus on awareness of community impact was a universal takeaway from CDEs that spoke with the Journal of Tax Credits for this series. Pietka said Ecotrust works hard to understand the people and the places where their work is committed in alignment with what Glynn said about avoiding playbooks of the past.

Ecotrust’s aims are, if necessary, to help repair a situation rather than make it worse. Due diligence is paramount to this practice, Pietka said. Seagren agreed, saying that while surprises happen during the life of a transaction, due diligence is an essential practice during underwriting. Seagren said outlining community impacts and other details early on at the term sheet phase can help, too.

“It’s really important to underwrite all impacts before you get to the point of closing calls,” Seagren said. “Make sure you have everything you need, you’ve come to an agreement on the projected community impacts before incurring closing costs.”

Once a project is in place, Pietka said communication is vital. One way to do that is through “affected parties analysis,” which Pietka broke down as a dressed up way to say “literally just conversations with each project and its community partners.” She said she looks for how Ecotrust can further support by building networks and generating opportunities.

Proof of a CDE knowing its audience came when Pietka detailed why Ecotrust uses the term “affected parties analysis” instead of “stakeholder” as she said the latter, for some in tribal communities, can evoke the image of an individual staking a claim on indigenous land. In addition, tribal governments and their citizens are entitled to certain rights–any interactions with tribes should ensure sovereignty is recognized.

Pietka said that climate resilience and environmental steward work are inextricably linked with racial equity due to the disproportionate way people of color are affected by climate change.

“In general, for us as a CDE, we recognize that social, economic and ecological health are interrelated and interdependent,” Pietka said. “Our goal is to fund projects that are self-sustaining economically, self-regulating environmentally and self-actualizing for the community.”

AMCREF seeks to change this dynamic. Seagren said AMCREF requires businesses to commit to hire people of color, especially in alignment with the demographics of an area. Companies led by or employing people of color come to the table with a feather in their cap for AMCREF.

“That company moves higher up on our pipeline because of it,” Seagren said. “Minority-led or -owned companies get a closer look from us for sure.”

Front-line communities, those affected first and worst by climate change, face more immediate challenges than others, for example. Ecotrust is examining how the community has been impacted and how the potential investment addresses climate change, whether the goal is mitigation or adaptation and resiliency.

Lucy Arellano Baglieri, executive vice president and chief strategy officer for the Low Income Investment Fund, agreed. Arellano Baglieri said it is unhelpful to uncouple the overlap between the impacts of climate change and environmental justice.

“We have to center racial equity in that as well,” Arellano Baglieri said. “We know, as a baseline, communities of color are the hardest hit by climate change.”

Arellano Baglieri said the moment has arrived not just for individuals to do their part in the fight against climate change, but that the economic levers of society must be pulled.

“As a global citizen, I have to think about climate change,” Arellano Baglieri said. “We’re not ‘on the brink.’ There’s a lot of disaster already. When we’re applying to do the work, we have to make a business case for it. … We recognize we need to get more nuanced about it.”

Numerous Priority Issues Have the NMTC Working Group Looking Beyond 2023 to 2025
Impact of Food-Related NMTC Investments Can Ripple Through Communities
NMTC Market Steady Despite Effects of Pandemic, Inflation
END_OF_DOCUMENT_TOKEN_TO_BE_REPLACED