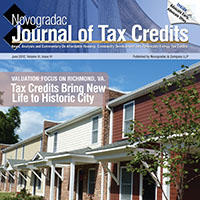 In response to predictions – including my own – that the run up to the November elections will likely involve numerous “show” votes but no real congressional action, it might be tempting to tune out this summer and disregard news from Washington until after the election results are in. However, the fiscal pressure that will continue to build amidst this summer’s “show” votes could push lawmakers to strike significant agreements during the lame duck session on matters such as tax and budget bills.

With tax reform gaining momentum and a sustained focus on deficit reduction factoring in to every legislative issue, active and thoughtful advocacy will be essential in the coming months. In the context of comprehensive, fundamental tax reform, everything is on the table. Most reform proposals call for broadening the tax base by eliminating loopholes. But one person’s loophole is another person’s congressionally-intended and societally justified tax expenditures. The tax credit community must continue to justify the existence in the tax code of the low-income housing tax credit (LIHTC), new markets tax credit (NMTC), historic preservation tax credit (HTC) and renewable energy tax credits (RETCs).

And as the election nears, members of Congress will be spending more and more time in their home states and districts. These state and district work periods provide a terrific opportunity for the affordable housing, community development, historic preservation and renewable energy communities to reach out to lawmakers.

Seeing is Believing
The best way to demonstrate the real benefits of a tax credit program is to invite your congressman or senator to see a tax credit development in their district or state. Use the visit as an opportunity to tell the stories of the people who benefit from these important programs. The battle to protect and improve the LIHTC, NMTC, RETC or HTC must be waged and won “at home.”

Tax credit developments involve a number of milestones that are natural opportunities for a visit such as groundbreakings, ribbon-cuttings and grand reopenings after a renovation. “Before” pictures of the area or property help illustrate the difference tax credits can make. If you are involved with an exemplary tax credit development that hasn’t had a recent milestone, invite your representative for a property tour and introduce them to residents, workers or business owners. Between state and district work periods, you can e-mail or fax updates to lawmakers and their staff members in their local offices and in Washington, D.C. to keep them updated on developments that serve their constituents.

Communications with lawmakers – in writing or in person – should also highlight the economic benefits created by the tax credit including how many jobs were created, local businesses that were opened or expanded, the role of local investors in the transaction and other positive economic indicators. This information shouldn’t be difficult to find; these tax credits have been extended, enhanced and in some cases made permanent for a reason: they work.

Supporting the Low-Income Housing Tax Credit
In addition to providing information to lawmakers about specific tax credit developments in their state or district, the LIHTC’s national numbers are worth mentioning. It’s estimated that the LIHTC creates 100,000 rental units and 100,000 jobs annually. You can also use the “Dear Colleague Letter” drafted by Congressmen Pat Tiberi and Richard Neal to talk with your representative about cosponsoring H.R. 3661. H.R. 3661 would make permanent the 9 percent LIHTC floor, a floor that was enacted as part of the Housing and Economic Recovery Act. Similarly, Sens. Maria Cantwell and Olympia Snowe drafted a cosponsor outreach letter seeking support for S. 1989, the Senate companion bill.

Additional information and tools to help you advocate effectively have been prepared by the A.C.T.I.O.N. campaign – a broad national coalition whose primary focus is to call on Congress to protect and preserve the LIHTC in whichever deficit reduction solutions or tax reform proposals it considers. Talking points, tips on planning and arranging a visit with lawmakers and much more can be found at http://rentalhousingaction.org. A plethora of information about the LIHTC can also be found online at www.taxcredithousing.com.

Supporting the New Markets Tax Credit
The diverse array of community development transactions that have benefited from the NMTC program make it easy to support. This targeted tax credit has spurred economic growth in low-income and highly distressed communities. More than 73 percent of NMTC activity is in areas with distress levels in excess of government requirements for the program.

Two additional tools are available from the New Markets Tax Credit Working Group: the NMTC Qualifying Census Tracts Mapping Tool, and a special report about the efficiency of the NMTC.  The online mapping tool includes thousands of data points representing billions of dollars of low-income community investments made from the beginning of the program through 2010. The tool can be searched by congressional district, address, city, county, state or zip code to display NMTC investments. The Working Group’s special report, “NMTC Program Outperforms Comparable Cash Grant Program,” counters a Government Accountability Office report that suggested a cash grant program to replace the NMTC would be more efficient in delivering subsidy to qualified businesses in low-income communities. Both of those resources are available at www.newmarketscredits.com.

In addition to creating a personal association for lawmakers by way of local HTC projects, the overall benefits of the program are a strong argument for its continuation. According to Rutgers University’s Center for Urban Policy Research, in 2009 and 2010 historic rehabilitation created more than 145,000 new jobs. In its 32-year history, the federal HTC has helped create 2.2 million jobs, saved 38,000 vacant or underutilized buildings and attracted almost $100 billion in private investment in urban and rural communities. For every $1 in historic tax credits, $5 in private investment is leveraged.

In addition, HTC transactions have experienced very low rates of recapture. As reported in “Historic Rehabilitation Tax Credit Recapture Survey,” a report commissioned by the National Trust for Historic Preservation and produced by Novogradac and Company LLP, a group of historic tax credit investors who have invested in more than 50 percent of the HTCs claimed during the past 10 years reported experiencing a historic tax credit recapture rate of less than three-quarters of one percent during that time.

Once you’ve demonstrated the clear benefits the HTC provides, ask your senator to support the Creating American Prosperity through Preservation (CAPP) Act to keep historic preservation working. The National Trust for Historic Preservation has compiled fact sheets and information to help the preservation community support the historic tax credit online at savingplaces.org. Additional resources are also available at www.historictaxcredits.com.

Supporting Renewable Energy Tax Credits
Even if you don’t know of an actual renewable energy development in your area, it would be difficult to find a state or district where more jobs wouldn’t be welcome. The renewable energy production tax credit (PTC) is a proven job creator but its looming expiration is threatening that progress.

Bills have been introduced in the House and Senate to extend the PTC. In the House, H.R. 3307 would extend the PTC for four years and in the Senate, S. 2201 would extend the PTC for two years. There is significant bipartisan support for this extension, but the renewable energy community must continue to reach out to lawmakers to communicate the importance of passing this extension. Additional information on supporting the PTC extension can be found online at www.awea.org. Extensive information about renewable energy tax credits is available at www.energytaxcredits.com. Novogradac & Company has also established a Renewable Energy Working Group to address many of the various technical and political issues facing the renewable energy industry. Learn more about this helpful resource at www.renewableenergyworkinggroup.com.

Conclusion
If lawmakers are aware of the impact in their states and districts of these important programs it’s more likely they will oppose efforts to weaken or eliminate the tax credits and possibly even consider sponsoring legislation to improve and enhance the programs.

Even though legislative action on tax reform will not begin in earnest until after the election, it’s never too early to get involved. It’s also a good idea to coordinate your efforts with the rest of the tax credit community; if you’d like to let us know about your advocacy and any results from those efforts, please send an email to [email protected].