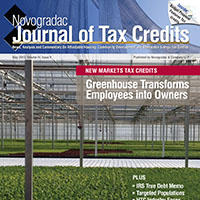 In his proposed budget for fiscal year (FY) 2014, President Barack Obama recommended the passage of several tax provisions related to affordable housing, community development and renewable energy. Many of the proposals are encouraging, in that they indicate support for important tax credit programs, but in the face of contention and gridlock in Congress it’s hard to tell if any will gain traction. The proposed budget also contains a number of possible changes to funding for the U.S. Department of Housing and Urban Development (HUD), which if enacted would have significant implications for the development of affordable housing.

Tax Credit Provisions
The budget proposes several changes to the rules governing low-income housing tax credits (LIHTCs), some of which have been proposed in previous budgets and some that are new this year. Provisions that have been re-proposed include allowing LIHTC properties to comply with an income-averaging rule and making LIHTCs beneficial to real estate investment trusts (REITs).

For the former, the proposal would create a new minimum set-aside test based on a minimum of 40 percent of the units in a project being occupied by tenants with incomes that average no more than 60 percent of the area median income (AMI). No rent-restricted unit, however, could be occupied by a tenant with income over 80 percent of AMI; and, for purposes of computing the average, any unit with an income limit that is less than 20 percent of AMI would be treated as having a 20-percent limit.

For the second proposal, the administration suggests permitting a REIT that receives LIHTCs to designate as tax-exempt some of the dividends that it distributes. Dividends so designated would be excluded from the gross income of the shareholders that receive them. If there is insufficient earnings and profits to make distributions that fully use the calculated allowable exemption amount, the unused authority to designate tax-exempt dividends could be carried forward indefinitely. Also, under the proposal, if a REIT or regulated investment company (RIC) is a shareholder that receives these tax-exempt dividends, the recipient could designate as exempt a corresponding amount of dividends that it distributes. In the case of any compliance failure, the REIT would be responsible for tax credit recapture as if it had used the credit to reduce its own tax liability. Under the proposal, the passive-loss and at-risk rules would not apply to the receipt of the exempt dividends. It is unclear how valuable a provision like this would be to REITs and their shareholders. If a substantial portion of a particular REIT’s shareholders are tax-exempt pension funds, then those tax-exempt investors would see little value from the tax-exempt nature of a portion of the dividend payments.

Another new proposal would allow states to convert some private activity bond (PAB) volume cap into authority to allocate additional LIHTCs. According to the General Explanations of the Administration’s Fiscal Year 2014 Revenue Proposals (also known as the Green Book), for each $1,000 of PAB volume cap surrendered, the state would receive additional allocable LIHTCs for the calendar year equal to $1000 × twice the 4 percent tax credit percentage for December of the preceding calendar year. (In December 2012 this percentage was 3.16 percent.) The aggregate amount of PAB volume cap that each state would be allowed to convert with respect to a calendar year would be 7 percent of the PAB volume cap that the state receives for that year. This provision would essentially avoid projects having to incur the costs of issuing bonds in what is often referred to as a “bond burning” transaction. In such transactions, a project developer uses tax-exempt bond volume to finance her project so it is eligible for LIHTCs, but pays off the bonds sometime between placing the property in service and after the end of the first year of the credit period.

The proposal would extend the new markets tax credit (NMTC) permanently and set an annual allocation amount of $5 billion. In its proposal, the administration estimates that $250 million per round will support financing healthy food options in distressed communities as part of the Healthy Food Financing Initiative. The proposal also would permit NMTC amounts resulting from qualified equity investments (QEIs) made after Dec. 31, 2012, to offset alternative minimum tax (AMT) liability. The annual $5 billion amount is consistent with the annual amount that the broader community development community is striving to see enacted.

The administration’s FY 2014 proposed budget also calls for permanently extending the renewable electricity production tax credit (PTC) and making it refundable. In addition, the administration recommends the per kilowatt-hour PTC be made available to electricity produced from solar facilities. Under the proposal the refundable tax credit would be available for property on which construction begins after Dec. 31, 2013. The budget calls for an additional $2.5 billion in advanced energy manufacturing tax credits. As proposed, applications for the additional credits would be made during the two-year period beginning on the date on which the additional authorization is enacted.

The budget proposes $2 billion in a new Manufacturing Communities Tax Credit, which could be structured using the mechanism of the NMTC or as an allocated investment credit similar to the Qualifying Advanced Energy Project Credit.

The administration also proposed the creation of a new permanent America Fast Forward Bond program, which would be an optional alternative to traditional tax-exempt bonds. Like Build America Bonds, the proposed America Fast Forward Bonds would be conventional taxable bonds issued by state and local governments in which the federal government makes direct payments to state and local governmental issuers (refundable tax credits). The subsidy rate would be 28 percent, which the Green Book says is “approximately revenue neutral in comparison to the federal tax losses from traditional tax-exempt bonds.”

HUD Appropriations
On the appropriations side, the FY 2014 budget proposal includes cuts to some HUD housing and community programs, such as HOME funding, which would be reduced by 5 percent from FY 2012 levels to $950 million and Community Development Block Grant (CDBG) formula grants which would also be reduced 5 percent, to $2.8 billion. These cuts are consistent with the spending cuts mandated by the Budget Control Act, known as sequestration. Taking a much larger hit, funding for the Section 811 Housing for People with Disabilities program would be reduced by 24 percent, to $126 million, under the FY 2014 budget proposal.

On the other hand, there are a few bright spots; some programs would receive funding increases from FY 2012 enacted levels. The proposal calls for Project Based Rental Assistance to be fully funded at $10.2 billion; current industry estimates suggest this would allow all existing contracts to be fully funded if sequestration is replaced. Also under the proposal, Tenant Based Rental Assistance funding would be increased to $20 billion and the Public Housing Operating Fund would receive a 16 percent increase.

Tax Reform
The administration’s proposed FY 2014 budget didn’t provide a detailed tax reform proposal but it did include important information regarding tax reform. In the proposed budget, the administration calls on Congress to purse business tax reform based on a number of guidelines:

Conclusion
It’s much too soon to tell how many, if any, of these proposals will be enacted. However, their inclusion in the budget proposal is encouraging because it indicates the administration values the contributions of these important tax credit and HUD programs.