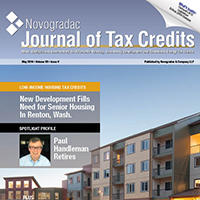 When Sen. Maria Cantwell, D-Wash., announced her proposal to expand the federal annual low-income housing tax credit (LIHTC) annual allocation by 50 percent in late March, it was one of the biggest proposed legislative changes to the LIHTC during its three-decade history.

Cantwell heralded her plan March 24 in Seattle, followed by similar subsequent events in the state—Spokane, Tacoma and the Yakima Valley. Her announcement included the 50 percent cap increase in LIHTC allocation, as well as a plan to:

But the 50 percent cap increase rightfully grabbed the headlines. The announcement of her planned legislation–at press time, Cantwell’s bill wasn’t introduced in the Senate–came on the same day the senator released a letter from the ACTION Campaign—signed by over 1,300 national, state, and local organizations in all 50 states and DC—that asked for the 50 percent increase. Her office additionally released a report called, “The Housing Tax Credit: Addressing the Challenges of Housing and Homelessness,” which focused on the success of the LIHTC in her home state and the nation.

Cantwell’s staff estimated that the proposed 50 percent increase would create about 400,000 additional affordable housing units over the next decade. Novogradac & Company is conducting further analysis of the estimated effects, which will depend on the specific legislative language of the bill.

This isn’t Cantwell’s first effort to enhance and improve the LIHTC. Last year, she was a champion of a proposal to make permanent the 9 percent LIHTC rate floor–an idea that was approved by Congress as part of the Protecting Americans from Tax Hikes (PATH) Act of 2015. Cantwell has long been one of the leaders in the affordable housing legislative world, sponsoring multiple bills that sought to make permanent both the 9 percent and 4 percent LIHTC floors, as well as being the lead sponsor of S. 2666, the bill that eventually evolved into LIHTC provisions of the Housing and Economic Recovery Act of 2008 (HERA), which included a temporary 10 percent LIHTC increase.

Cantwell’s proposal is significant, and the basic concept has been a point of discussion in the affordable housing community after former House Ways and Means Committee Chairman Dave Camp released his comprehensive tax reform proposal that preserved the LIHTC and actually proposed roughly a 5 percent allocation increase in February 2014. One noteworthy voice calling for the 50 percent increase in LIHTCs was that of the Bipartisan Policy Center’s Housing Commission, which recommended the move three years ago in a report called “Housing America’s Future: New Directions for National Policy.” In that report, the Bipartisan Policy Center said that such an increase, combined with an extra $1 billion in HOME funds reserved for LIHTC properties, would support the preservation and construction of 350,000 to 400,000 units over 10 years at an average annual cost of $1.2 billion.

The Bipartisan Policy Center report included suggestions similar to Cantwell’s, calling for a new formula and targeting to help cost-burned renters. In addition to supporting more new construction financed by the LIHTC, it also “strongly endorsed” the use of LIHTC resources to preserve existing affordable properties, while insisting that control remain at the state level.

While the cost of a 50 percent LIHTC increase will certainly be a point of discussion in Congress, there is little doubt that there is a significant need for more affordable housing in America. Even though the LIHTC alone has been responsible for the construction of more than 2.8 million affordable rental homes since its launch in 1986, there remains a shortage of 4.6 million affordable and available rental homes for extremely low-income households (those whose income is at or below 30 percent of the area median gross income).

That’s because there are just 5.8 million apartments affordable and available to extremely low-income households–that number includes public housing and all other types of affordable housing–and there are 10.4 million extremely low-income households, according to “The Gap: The Affordable Housing Gap Analysis 2016,” which was released by the National Low Income Housing Coalition in March.

Affordable housing professionals are well aware that LIHTC demand is much higher than the supply. It’s routine for state agencies to receive two or three times or more as many applications for LIHTCs than actually get funded. For instance, in March alone, Iowa allocated $6.9 million in 9 percent LIHTCs to a group of applicants that made $19.2 million in requests and Connecticut allocated $7.1 million after getting $20.5 million in requests. Those totals aren’t unusual, which has led to creative attempts to maximize the limited LIHTC availability.

Take California, which attempts to use its state-level tax credit to supplement the federal credit. That state has been allocating state LIHTCs to all projects outside difficult development areas or qualified census tracts, but the demand has been so great that a change is needed. Earlier this spring, the state released its second memo seeking feedback on proposals to help address an over-allocation of state credits that has already left it with forward-commitments of $34 million of this year’s $94 million in state credits. That’s because the great LIHTC demand motivated the state to use future year’s state credits to meet current needs.

California’s shortfall–and those around the nation–would be at least partially addressed by a 50 percent increase in the federal LIHTC. Cantwell’s proposal would be a game-changer for the LIHTC, providing significant opportunities for developers, investors and–most significantly–low-income renters.

Until Cantwell’s proposal, the biggest LIHTC legislative move since the credit was enacted as part of the Tax Reform Act of 1986 came at the end of 2000. That was the seminal Consolidated Appropriations Act of 2001, which included the Community Renewal Tax Relief Act of 2000, a bill that increased the LIHTC per-capita cap from its longtime level of $1.25 to $1.50 in 2001 and $1.75 in 2002, an increase of 40 percent over two years. The bill also created an annual inflation adjustment in 2003 and thereafter. The $2.35 per capita amount for 2016 represents an increase of 88 percent over the 2000 level.

To see the impact a change such as Cantwell’s current 50 percent increase proposal would make, it’s instructive to look at what happened in the wake of the 2001 increase. The number of LIHTC-financed developments shot up in the years immediately following it, going from an average of about 109,000 units per year that were placed in service in the five years preceding the legislation’s enactment to about 133,000 in the five years after it.

Of course, there were other factors involved. The economy was actually in a slowdown as the tech bubble burst and America recovered from the effects of the Sept. 11, 2001, terror attacks. But the 40 percent increase in the LIHTC cap was a critical factor in an additional 24,000 units per year coming on board–a building boom that is still being felt as those properties reach the end of their 15-year compliance period. Interestingly, the approval of Cantwell’s legislation could pave the way for much of that rehabilitation.

The 2000 law isn’t the only big LIHTC legislation, of course. But other significant LIHTC adjustments have largely been of the emergency- or temporary increase type, such as:

While each made significant changes to the short-term use of the LIHTC and helped in recovery from natural or economic disasters, they were specific and time-limited.

In addition to the three proposals she mentioned at her Washington state events, it is expected that Cantwell will propose making more technical improvements and enhancements to the LIHTC, which could include a minimum 4 percent for acquisition and bond-financed developments, exempting state LIHTC from federal taxation, allowing relocation costs in eligible basis, among other proposals. There is plenty of debate to come and a long legislative road to travel, but it makes sense to conclude, as Cantwell did, that a significant increase in the LIHTC cap would lead to a significant increase in the number of apartments available to the extremely low-income population.

Anyone who doesn’t think so can look at history. What happened after the 2000 increase could happen again, and the beneficiaries would be widespread. Simply put, the increase and technical program improvements Cantwell plans to propose would make a meaningful step toward addressing the nation’s rental affordability crisis.