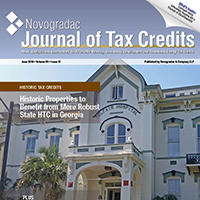 When Sen. Maria Cantwell, D-Wash., and Sen. Orrin Hatch, R-Utah, introduced legislation May 19 that was highlighted by a 50 percent expansion of allocations of the federal low-income housing tax credit (LIHTC), it was more than a boost for the affordable housing community. It was also a strong show of bipartisan support for the LIHTC.

Now comes the difficult work–navigating the bill through Congress during a presidential election year while tax reform looms. Passage won’t be easy—indeed passage of any significant tax legislation this year, but it’s worth watching–and the nature of the bill’s support makes that so.

The pairing of Senate Finance Committee Chairman Hatch with Cantwell was significant enough. It is rare for the chairman to cosponsor tax legislation of any kind, much less a bill sponsored by the minority party.  The addition of Sen. Ron Wyden, D-Ore., and Sen. Chuck Schumer, D-N.Y., as original co-sponsors added even more gravitas to the Affordable Housing Credit Improvement Act of 2016 (S. 2962); Wyden is the Ranking Democrat on the Senate Finance Committee and Schumer is expected to be the Senate’s Democratic leader next year. If the Democrats take over the Senate after the November election, Wyden will be chairman and Schumer will be the Senate Majority Leader.

S. 2962 includes several major provisions, chief among them a 50 percent increase in allocation authority. Allocations would grow 10 percent per year starting in 2017, reaching the 50-percent-boost-level in 2020. As we addressed last month in this space, that would bring the biggest change in the 30-year-old LIHTC program since 2001, when allocation authority jumped 40 percent over two years and was thereafter linked to the inflation rate.

The bill also included a 4 percent minimum credit rate for the acquisition of affordable housing and for multifamily tax-exempt housing bond-financed developments, which would parallel the establishment of a 9 percent minimum rate that was included in the PATH Act passed at the end of 2015. Cantwell’s previous LIHTC bill would have set a permanent 4 percent minimum rate only for property receiving an allocation of LIHTCs subject to the credit volume cap.

The current rate is closer to 3 percent. An increased minimum rate would increase the amount of equity invested by approximately 25 percent, expanding the number of financially feasible tax-exempt-bond-financed affordable housing developments.

The legislation also includes a provision that allows income-averaging in LIHTC developments. That would allow certain apartments in a LIHTC property to be available to residents making up to 80 percent of the area median income (AMI), so long as the development-wide average is 60 percent or less. Allowing income averaging not only permits a broader mix of incomes, it makes the LIHTC attractive in places where it now is difficult.

Similar provisions have been included in several previous administration budget proposals, including in the Obama administration’s proposed budget for fiscal year 2017, which would require at least 40 percent of units are reserved for households at an average of 60 percent of AMI, with no households having an income greater than 80 percent of the AMI.

Income averaging is most beneficial to affordable rental housing properties in areas with high housing cost, meaning residents earning between 60 and 80 percent of the AMI could help subsidize housing for those earning less than 40 percent of the AMI. Income averaging can also help in rural areas, where small populations and very low AMIs make it more difficult to identify a pool of enough income-eligible renters living close enough to the proposed development in order to justify financing the development. Income averaging also supports low-income community revitalization, where bringing households at up to 80 percent AMI would help bring greater economic diversity to troubled areas. Furthermore, the proposal would help recapitalize existing affordable rental housing developments in need of preservation, but where some tenants who were income-qualified when they moved in, but whose incomes have risen over the years above 60 percent of the AMI.

The Affordable Housing Credit Improvement Act didn’t include some provisions that Sen. Cantwell supported in her March 24 announcement, including a basis boost of up to 50 percent for units reserved for extremely low-income households, those earning at or below 30 percent of the AMI. Cantwell’s office said she expects to introduce future legislation that would include those provisions.

Many affordable housing insiders expect see a second bill this summer sponsored by Cantwell to address basis boost and other LIHTC improvement provisions. The hope is that Hatch and others will join with her in supporting the additional changes.

Cantwell is a longtime advocate of affordable housing and this year she has made it a priority. The senator highlighted the A.C.T.I.O.N. Campaign earlier this year in her campaign to increase LIHTC allocations, and then her office released a report on the LIHTC that found there are nearly 4 million households in the nation that lack access to affordable housing. Then the biggest step: the introduction of the Affordable Housing Credit Improvement Act.

As expected the Cantwell-Hatch bill received broad support from affordable housing organizations, earning praise for both the provisions and the widespread support that the bill’s sponsorship heralded.

The fact that the committee chairman and the ranking Democrat are co-sponsors assure that it won’t be sent to legislative purgatory, but most advocates don’t expect the Affordable Housing Credit Improvement Act to pass on its own. Most likely the bill will need to be a part of broader legislation to move through Congress–particularly with an estimated cost of $4 billion over the next decade as significant pressure remains to cut government spending.

We’re likely in for months of debate, negotiation and discussion about the Affordable Housing Credit Improvement Act. With the presidential election looming, as well as elections facing House members and one-third of the Senate, other issues will certainly push to the forefront. But, the bill addresses a significant national issue and it has the backing of some of the most powerful members of Congress.

In addition to crafting and introducing this landmark legislation, by securing the support of allies as powerful as Hatch, Schumer and Wyden, Cantwell assured that S. 2962 wouldn’t die a lonely death. And now the affordable housing community has a momentous opportunity to rally to the cause: educating additional lawmakers about the benefits the LIHTC creates in their states and neighborhoods; noting how much more could be done if the LIHTC were expanded; and encouraging them to sign on as cosponsors of the Affordable Housing Credit Improvement Act.;