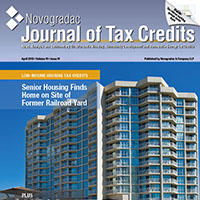 While there has been some minor narrowing in the ratio of homeownership to rental subsidies, rental housing continues to receive short shrift from the federal tax code.

This imbalance is especially striking particularly considering the U.S. Department of Housing and Urban Development’s (HUD’s) recent Worst Case Needs Report, released in February. It found that in 2013, 7.7 million renter households that made less than 50 percent of the area median income and didn’t receive government housing assistance, paid more than 50 percent of their income on rent.

Homeownership vs. Rental Housing
While a majority of Americans are homeowners, the rates of homeownership have dropped since a peak homeownership level of nearly 70 percent in 2004. According to current population survey data, the national homeownership rate is 64 percent. This is down more than 5 percent from the 2004 peak, meaning the number of those who rent due to their economic status or through personal choice is growing. The true ratio of homeowners to renters is approximately 2 to 1. To reach a 64 percent/36 percent proportionate allocation of tax subsidies, rental tax subsidies would need to be allocated an additional $350 billion over the five-year time frame. If you keep the total amount of tax expenditures constant, thus keeping the impact of housing tax subsidies revenue-neutral on the federal budget, $224 billion would need to be allocated away from homeownership and directed instead to rental subsidies over the five-year time frame.

For the five-year period 2014-2018, the JCT reports that federal tax expenditures for homeownership subsidies, measured on a cash basis, amount to $405.2 billion for homeowners’ interest deductions, $149.3 billion in capital gains exclusion, $182.1 billion in property tax deductibility, $6.6 billion in interest on exclusion on homeowner bonds, $3.1 billion in non-recognition of discharge of mortgage indebtedness and $600 million in deduction for qualified mortgage insurance premiums. This results in $746.9 billion in subsidies for homeowners. It is noteworthy that each of these elements has increased since the JCT’s last expenditure report, excepting a $100 million decrease in interest on exclusion on homeowner bonds. In addition to these tax expenditures, the Office of Management and Budget (OMB) also calculated a federal tax expenditure of $449.6 billion for the cost in federal tax revenue attributed to the ability of homeowners to omit recognizing imputed taxable income on the imputed value of occupying their owned home. As this expenditure represents a theoretical concept subject to considerable political debate, it was omitted for purposes of these calculations.

By comparison, for the same period 2014-2018, the federal tax expenditures that subsidize rental housing using the cash basis measure include $40.5 billion for low-income housing tax credits (LIHTCs), $5 billion in interest exclusion on rental housing bonds and $23.7 billion for accelerating rental housing depreciation. These generate a considerably smaller total of $69.4 billion in rental housing subsidies. Aside from these items, the OMB calculates a federal tax expenditure of $49.2 billion in passive loss exception for individuals. This analysis omitted the passive loss exception for individuals for two reasons. First, this exception applies to all rental real estate, not just rental housing. Second, the passive activity rules, in general, serve to limit the ability of taxpayers to deduct losses and claim credits from residential rental businesses. This limit on the deductibility of losses and use of credits from residential rental businesses is a revenue raiser, not a tax expenditure, and thus should not be considered a subsidy for rental housing.

The JCT’s calculated federal tax expenditure of $7.9 billion in foreign housing exclusion and deduction for individuals was also excluded for purposes of this discussion, because it is unclear how much of this expenditure benefits homeowners versus renters. Similarly, the portion of preferred rate (15 percent) on capital gains stemming from the sale of residential rental properties was excluded from consideration, because it is difficult to disentangle this expenditure from accelerated rental housing depreciation, which is generally taxed at a 25 percent rate. Excluding this federal tax expenditure avoids overcounting the cost of accelerated depreciation. Also excluded is the benefit to homeowners with home sale gains benefiting from the lower 15 percent preferred capital gains tax rate.

Comparison to Prior Years
The homeownership-to-rental-tax-subsidy ratio in the current JCT estimates increased by 0.1 between 2013 and 2014. Rewinding five years to 2011, the gap was wider and the ratio was 12 to 1 in the JCT estimates.

The smaller gap between homeowner subsidies and rental housing subsidies represented in more recent budgets is generally the result of declining interest rates and falling home prices, not the result of any conscious public policy. The president’s budget proposal for fiscal year 2016 didn’t contain major changes in the makeup of these amounts. Nevertheless, now is time to call for the narrowing of the gap between the tax dollars used to encourage homeownership and the tax dollars provided for rental housing.

This is particularly important because the need for affordable rental housing has grown in recent years. There has been a 55 percent increase in the supply gap of affordable housing for households making less than 30 percent of the area median income since 2000. Further, this gap will only increase with predictions of 400,000 new renter households each year over the next decade and supply currently lagging behind.

Appropriations and Direct Spending
On the appropriations and direct-spending side, the ratio between homeowner and rental subsidies appears relatively more balanced. However, this apparent balance partially stems from the difficulty in estimating the subsidy value to homeowners stemming from government-sponsored entities such as Fannie Mae and Freddie Mac and in detangling spending that benefits both renters and homeowners. The Congressional Budget Office (CBO) estimates subsidy cost for Fannie Mae and Freddie Mac as the difference between these entities fees and income on mortgage/debt commitments and the sum of losses and risk associated with those commitments. In turn, the long-term estimates of subsidy costs for CBO have dropped significantly from the time the government took control of Fannie Mae and Freddie Mac, as the mortgage market has stabilized. Because of the offset of the cost of Fannie Mae and Freddie Mac by their income, the estimated subsidy cost vastly underestimates the actual value of the subsidy to homeowners. This is a complex topic deserving of fuller consideration, so a future Washington Wire column will explore in more depth the relative spending by the government on homeowner subsidies versus rental subsidies.

Conclusion
Congress should keep these imbalances in mind when considering budget resolutions, tax reform and appropriations bills. Subsidies in the tax code are heavily biased toward homeowners, while the proportion of the U.S. population who own a home is decreasing. If this trend continues, the need for additional rental housing will continue to grow in urgency.