Washington Wire: How Will Tax Credits Fare Under President Trump? 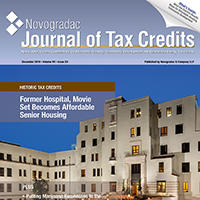 Donald J. Trump’s stunning election as our 45th president brought plenty of uncertainty–including to the tax credit community. Following the biggest presidential election surprise in a generation, Republicans will soon control the White House and both houses of Congress. President-elect Trump will enter the White House in January with a full agenda, one that includes repeal of the Affordable Care Act (ACA), funding infrastructure and reshaping the U.S. tax code. The possibility of comprehensive tax reform has never been more possible than now. How such reform, if it becomes a reality, would affect various tax credit programs is very much an open question. A question for which we are all searching for answers.

Trump will take office knowing that while Democrats made modest gains in both houses of Congress in the November election, Republicans retained a significant advantage in the House and are very likely to control the Senate over the next four years. For the foreseeable future, Republicans will call the shots.

There is widespread belief that the first tax initiative that will be pushed by President-elect Trump and congressional Republicans is repealing and replacing one of President Barack Obama’s signature legislative achievements, the ACA. The GOP will most certainly use budget reconciliation to facilitate passage. Budget reconciliation is a procedure that prevents senators from filibustering legislation with a budget impact and allows for such legislation to be passed with just 51 votes in the Senate, rather than the 60 generally required to prevent filibuster. Because Republicans control Congress and the White House, the House and Senate can come to an agreement on repealing and replacing ACA under budget reconciliation and send it to the president for his signature without any support from Democrats.

Meanwhile, House Republicans are also expected to continue drafting a comprehensive tax reform plan. There is considerable ongoing discussion as to whether House Republicans would also use budget reconciliation to pass tax reform. One challenge, however, is that legislation enacted under budget reconciliation cannot increase the budget deficit beyond 10 years, so tax reform enacted using this parliamentary tool would likely be in effect for only a decade.

Trump may have provided a preview when he modified his tax plan during the campaign to make it closer to the House blueprint on tax reform, a 35-page document that outlines the plans of the House Republicans Tax Reform Task Force. That decision–if it indeed reflects Trump’s plans–increases the possibility that the president-elect could turn to House Speaker Paul Ryan, R-Wis., and House Ways and Means Committee Chairman Kevin Brady, R-Texas, to guide tax reform.

The Senate is also eager to tackle tax reform. Sen. Orrin Hatch, R-Utah, chairman of the Senate Finance Committee, said after the election results were announced that his committee would renew its efforts to revamp the tax code. He also has his corporate integration proposal that may contribute to the tax reform debate.

While Republicans generally support lower taxes and the principles behind tax reform, it’s important to remember that the GOP does not walk in lockstep. There are significant differences among Republican leaders and the rank and file in Congress, as well as between them and Trump. And if Republicans intend to rely solely on Republican votes and attempt to pass tax reform through budget reconciliation, in the Senate they can only afford to lose two Republican votes.

In trying to divine Trump’s views, many look to his father, Fred Trump, who developed a significant amount of workforce housing in New York in the 1960s and 1970s using Federal Housing Administration multifamily loans and New York State’s Mitchell-Lama multifamily incentive program. If you look to Trump’s own words, he has expressed support for housing development, most notably in August at the National Association of Home Builders’ board meeting, although not specifically for affordable housing. Looking to Trump’s business dealings, he helped finance his Trump International Hotel in Washington, D.C., with HTCs, so we surmise he’s at least familiar with the credit. And while Trump spoke frequently on the campaign trail in support of the coal and oil industries–which often advocate against renewable energy incentives–he also has expressed at least tepid support for the PTC.

During a time of potentially frenzied activity, keep in mind that both the LIHTC and the HTC are currently an indefinite part of the tax code, while the NMTC is wrapping up the first two years’ worth of a five-year extension, the PTC is moving into year three of a five-year phase-out and the ITC is starting the first year of its five-year phase-out. The permanent provisions aren’t necessarily safe–tax reform could put everything on the table and indeed, repealing them produces budget savings that can help offset the cost of tax reform.

In the coming weeks and months, we need to continue to define and refine the direct, indirect and macroeconomic effects of tax reform on each tax credit. The direct effects are the statutory design changes to a particular tax credit, the indirect effects are how the value of the tax credit is affected by other changes made to the tax code and the macroeconomic effects are how tax reform affects the economy overall, capital investment, labor participation and economic growth in various industry segments.

The Trump administration’s view of the LIHTC might be influenced by the fact that the credit has maintained strong support in Congress since it became a permanent part of the tax code in 1993. That doesn’t guarantee the safety of America’s most successful affordable housing program, though: If the environment becomes one where the desire to pass tax reform becomes more important than the specifics of good policy, nearly anything is on the table–and the Republican tax reform blueprint is silent on many tax expenditures, including the LIHTC. It should be noted that the former House Ways and Means Committee Chairman, Dave Camp, R-Mich., proposed to retain the LIHTC in his tax reform bill and there is considerable LIHTC support among Ways and Means Committee Republicans. In short, the LIHTC community is cautiously optimistic that the direct effect of tax reform would be retention of the program, albeit with potentially some design changes.

As of now, we don’t know which way Trump will lead on this issue–or whether he will have a stance at all–but supporters of the LIHTC hope to not only protect the affordable housing credit, but strengthen it. Remember that the Affordable Housing Credit Improvement Act of 2016, which sought to double the allocation of the LIHTC, was cosponsored by Sen. Hatch and Sen. Ron Wyden, D-Ore., the leaders of the Senate Finance Committee, which suggests strong support at least on the tax-writing committee in the Senate. One intriguing possibility is that tax reform legislation or legislation to promote infrastructure investment could include improvements to the LIHTC, both protecting and strengthening it. Again, though, time will tell.

The combined $7 billion fiscal year FY 2015-16 NMTC allocation–which was announced in November–provided momentum for supporters of the community development credit as they suddenly rallied to preserve it just 12 months after it received a five-year extension.

Trump has been largely mum on the NMTC, while Democratic presidential candidate Hillary Clinton called for permanency and a doubling of the annual allocation. But, the fact that a key leader in the Senate, Roy Blunt, R-Mo., cited support of the NMTC in his re-election campaign, and such support helped gain him an unexpected endorsement from the Kansas City Star, means that there are boosters in Congress.

There has been less talk about the fate of the HTC, it’s important to note that it also was left out of the Republican blueprint for tax reform and Camp’s bill explicitly repealed it. Trump will become the first president to have used HTC equity, but there is little indication about whether he would advocate for it in the context of tax reform–although preservation advocates will have plenty of ammunition to support their side.

While there a vigorous debate over climate change, neither Trump nor Clinton discussed renewable energy tax credits in much detail during the campaign. That made it unsurprising when Greentech Media reported after the election that a “Trump insider” said that energy wasn’t a top agenda item for the president-elect and that the ITC and PTC would remain in place. Of course, an unnamed insider in a fledgling presidential administration is a far cry from Trump making the same statement. Regardless, given the bipartisan agreement in last year’s tax extenders legislation, renewable energy insiders are in a position to lobby the federal government to keep hands off the already-scheduled ramp down of PTC and ITC.

A Hint of Sunshine?

Interestingly, Trump’s plan to address the need for more infrastructure funding includes … a tax credit. Trump maintains the credit would be revenue-neutral, thanks to wage income and tax revenues from additional contractor profits, which is very similar to ideas put forward to support the LIHTC, HTC, NMTC, ITC and PTC. Supporters of tax credits may be able to look to Trump’s proposed infrastructure tax credit–along with the fact that he used HTC financing for his Washington, D.C., hotel–for comfort that the next president understands the value of credits.

As more details and implications of the Trump administration and congressional Republicans’ approach to tax reform, specifically as to tax credits, emerge over the coming weeks and months, it’s wise for tax credit advocates to reach out to their congressional representatives and remind them of the effectiveness of the LIHTC, NMTC, HTC, ITC and PTC. The next president–and the people he selects for his administration–will play an enormous role in determining policy, but Congress is where tax reform will begin and battles will be fought.