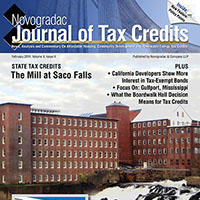 The 112th Congress convened in early January and the topics of tax reform, deficit reduction and fiscal policy were front and center as lawmakers discussed goals and priorities for the year. As the affordable housing, community development and renewable energy communities chart their legislative courses for 2011 it is important to understand the challenges they will likely face amidst political climate change.

Congressional Balance of Power Shifts
The 112th Congress is remarkably different than the 111th Congress. In the last session, President Barack Obama enjoyed considerable power because the Democrats held sizable majorities in both houses of Congress. But even with Democrats in control of the House and Senate, a handful of Senate Republicans wielded a significant amount of influence in the last session because 60 votes are needed in the Senate to pass major legislation and the Democrats held only 59 seats.

The midterm elections shifted power dramatically; President Obama still enjoys significant control, with Democrats in charge of the White House and Senate but House Republicans made record gains, picking up 63 House seats in the midterm elections and reclaiming the majority. While Democrats retained control of the Senate, the margin is now 53 Democrats to 47 Republicans, down from the 59 to 41 spread in the last session of Congress. With members of the 112th House of Representatives being more conservative than their Senate peers, it’s likely that when the House and President Obama agree the Senate will likely follow.

New Power Players
Incoming House Speaker John Boehner, R-Ohio, will set the agenda for the 112th Congress because the procedural rules of the House give him significantly more power to pass legislation than his Senate counterpart, Senate Majority Leader Harry Reid, D-Nev. However, Boehner is expected to face some challenges as he tries to balance the demands of 87 new House GOP freshmen.

At the committee level, incoming Budget Committee Chairman Paul Ryan, R-Wis., will be at the forefront of the Republican effort to cut discretionary spending and reduce the deficit. Chairman Ryan was a member of President Obama’s National Commission on Fiscal Responsibility and Reform, the bipartisan commission that proposed a variety of tax reform approaches, based largely on the idea of eliminating all or most tax incentives and using the savings to cut individual tax rates and reduce the deficit.

On January 5, the House passed H.R. 5, a set of rules for the 112th Congress. H.R. 5 made significant rule changes regarding the budget and appropriations process, namely replacing pay-as-you-go, or PAYGO, with “cut-as-you-go,” or CUTGO. In the 111th Congress, generally, any increase in direct spending or reduction in revenue had to be offset. Under the new CUTGO rules of the 112th Congress, increases in direct spending must be offset by reductions in spending elsewhere, but tax cuts will not have to be offset. Increases in revenue may not be used to offset spending increases.

Incoming Financial Services Chairman Spencer Bachus, R-Ala., will have oversight of the implementation of the financial regulatory reform bill that Congress passed in the 111th session. Bachus has jurisdiction over banking and securities trading as well as the Federal Reserve and the government-sponsored mortgage guarantors Fannie Mae and Freddie Mac. He has said he expects the subcommittee chairmen to take a lead role in setting the committee’s agenda. Three new subcommittee chairs of particular note are Rep. Scott Garrett, R-N.J., who is chair of the Capital Markets, Insurance, and Government Sponsored Enterprises Subcommittee; Rep. Shelley Moore Capito, R-W.V., chair of the Financial Institutions and Consumer Credit Subcommittee; and Rep. Judy Biggert, R-Ill., chair of the Subcommittee on Housing and Community Opportunity.

Focus on Tax Policy, Deficit Reduction
Deliberation over tax policy and deficit reduction will be prominent again in the 112th Congress. This discussion will be prompted in part by an upcoming vote on raising the national debt limit. The unfinished appropriations process for fiscal year 2011 is also expected to fuel the debate, as will the upcoming appropriations process for FY 2012.

As the Journal of Tax Credits went to print, reports indicated that President Obama would discuss the need for tax reform in his third State of the Union address on January 25. In addition, it’s expected there will be a push for tax reform on the part of several key lawmakers, such as Ways and Means Chairman Dave Camp, R-Mich.

In a speech to the Tax Council, a Washington, D.C. business group, Camp said, “I aim to launch and fight the tax reform battle once again. And, I am well aware that this might ruffle those who have used the tax code to benefit particular industries or activities at the expense of economic efficiency, simplicity and fairness. The tax code should collect the revenue the government needs as efficiently as possible. It should not be a tool of industrial policy.”

This deficit-minded environment will have a direct effect on the tax credit community’s chances when seeking extensions of tax provisions or substantive changes to tax credits. Any legislation that results in a material revenue loss will face significant challenges.

So what are some tax credit supporters’ goals for the coming year?

Low-Income Housing Tax Credit
Legislative items that low-income housing tax credit (LIHTC) supporters may support this year that have relatively low revenue losses include: extending or making permanent the 9 percent floor for the credit percentage for volume cap LIHTCs; broadening qualifying low-income levels for rural projects; and creating a targeted and limited Section 1602 low-income housing tax credit cash grant exchange program for rural areas. Additional legislative proposals are also being considered but have larger revenue costs, and as such are less likely to gain traction. These items include: creating a 4 percent credit floor for acquisition and tax-exempt bond financed projects, and expanding the credit carryback for LIHTCs from one year to five years.

In part because of the steep political terrain that must be ascended to enact any legislative improvements, LIHTC supporters are also pursuing other, non-legislative routes to bolster the program, such as broadening Community Reinvestment Act assessment areas and making accounting rule changes to expand use of the effective yield method.

New Markets Tax Credits
Legislatively, the two top priorities for the new markets tax credit (NMTC) community will be extending the program beyond its current sunset date of December 31, 2011, and allowing the NMTC to offset the alternative minimum tax (AMT). Again, cost will be a deciding factor. The two year NMTC extension approved in December was estimated by the Joint Committee on Taxation (JCT) to cost approximately $1.8 billion over 10 years. The AMT provision has a considerably lower impact on revenue; in July 2010, the JCT estimated it would cost approximately $444 million over 10 years.

There are also a number of non-legislative efforts being pursued related to the NMTC. The CDFI Fund has been working with the Treasury Department’s Office of Tax Policy and the Internal Revenue Service on several new measures to expand support for the NMTC program. Most recently, the CDFI Fund worked with the IRS to determine whether the IRS regulations can be modified to encourage more investments in operating businesses. Reports indicate that the Treasury Department continues to work on targeted population and recapture regulations. Once released, these regulations are expected to bolster investor confidence, which could increase participation in the program.

Historic Tax Credit
One of the historic tax credit community’s top priorities for 2011 is to continue to advocate for the provisions of the Community Restoration and Revitalization Act (CRRA). The CRRA would make several changes to the federal rehabilitation tax credit to provide a greater incentive for the preservation of historic property. It would also encourage building owners to achieve substantial energy savings in rehabilitations with graduated increases in the historic tax credit based on the level of efficiency achieved. The Historic Tax Credit Coalition reports that the CRRA gathered substantial support in the House and Senate during the last congressional session. But, preservationists lost many of the bill’s House cosponsors as well as its prime Senate sponsor in the midterm elections. As such, rebuilding a base of support for the bill will be central to the group’s efforts in 2011. In addition, the Coalition will continue to work with the executive branch to eliminate regulatory barriers to the modernization of the HTC.

May 4, 2021: What CDEs and Qualified Businesses Should Be Doing Now to Prepare for the Next NMTC Application Round
Posted on May 4, 2021
April 27, 2021: Maximizing the Benefit of State and Local Tax Incentives and Exclusions for Renewable Energy Properties
Posted on April 27, 2021
April 20: 2021: Understanding Provisions of the Affordable Housing Credit Improvement Act of 2021
Posted on April 20, 2021
END_OF_DOCUMENT_TOKEN_TO_BE_REPLACED

The Effects of COVID on NMTC Asset Management
Prepare for Success: Four Steps CDEs Should Take Now for the Next NMTC Application Round
Updated FAQs Provide Guidance for Emergency Rental Assistance Program
END_OF_DOCUMENT_TOKEN_TO_BE_REPLACED