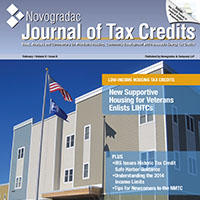 The Obama administration is expected to publish its proposed fiscal year (FY) 2015 budget soon. The release of the president’s proposed budget traditionally marks the starting point for the federal budget process, though in recent years the process has faltered and stalled.

At the time of this writing, a specific release date for the FY 2015 proposal had not been announced but reports suggest it will be delayed beyond its traditional timeline of early February. In the meantime, it may be useful to consider what has been suggested in the past and what we might expect this year.

Types of Proposals
The past 10 budget proposals have included a range of provisions related to LIHTC, NMTC, ITC and PTC. These proposals vary in terms of scope and cost, but for the most part they fall into two categories: extensions and modifications.

Other times, proposed tax credit modifications reflect economic conditions. For example, from 2004 to 2006, when the single family homeownership market was booming, the Bush administration proposed a homeownership tax credit for the construction of single family housing. During and after the Great Recession, the Obama administration pursued various changes to the LIHTC to make it useful despite economic challenges, such as extending the Section 1602 cash grant exchange program. Or more recently, the administration has proposed making the LIHTC beneficial to Real Estate Investment Trusts (REITs) to possibly expand the LIHTC investor pool.

It’s interesting to note that none of the past 10 presidential budget proposals have included provisions related to the HTC.

The size of the president’s proposed NMTC provisions increased significantly in 2014 when the administration called for making the NMTC permanent. The 10 year total for the proposed two-year NMTC extension in the 2011 budget was $3.4 billion; in 2014 a permanent NMTC was projected to cost $7.4 billion over 10 years.

Likewise, the cumulative size of the president’s LIHTC proposals increased from a total of $243 million in 2011 to $1.4 billion in 2014. This dollar increase correlates with an increase in the number of provisions proposed. For FY 2011, the administration called for only one LIHTC provision: to extend the Section 1602 LIHTC cash grant exchange program that was created by the American Recovery and Reinvestment Act. And for FY 2014, the administration included five provisions related to the LIHTC. (Visit novogradac.wordpress.com for a list of tax credit provisions proposed in recent years.)

These considerable increases suggest the administration has confidence in these important programs and the economic and social benefits they create. This is no surprise considering that since its inception the NMTC has created or retained an estimated 358,800 jobs according to the Community Development Financial Institutions (CDFI) Fund. The CDFI Fund reports that for every $1 invested by the federal government, the NMTC program generates more than $8 of private investment. This is particularly impressive because more than 70 percent of NMTC investments have been made in highly distressed areas – communities with low median incomes and high unemployment rates – where these NMTC investments can have a dramatic positive impact.

Likewise, the LIHTC is widely considered the nation’s most successful rental housing program, creating 95,000 jobs annually and financing more than 2.6 million affordable rental homes. Over the course of its existence, the LIHTC is believed to have leveraged more than $75 billion in private investment in affordable rental housing – and the resulting properties experience a relatively low foreclosure rate relative to other real estate asset classes. (For more information, see the Novogradac special report “Low-Income Housing Tax Credit: Assessment of Program Performance & Comparison to Other Federal Affordable Rental Housing Subsidies.”)

It’s essential to note that even though the administration has called for substantial increases in these programs, the overall costs of proposed tax credit provisions have been incredibly small relative to the size of the total budget, even at their height. For example, the largest NMTC provision as a percentage of the proposed total was seen in the FY 2014 budget, which called for a permanent NMTC. That proposal anticipates a total cost of changes out of total budget percentage of only 0.027 percent for 2023.

Enacted Proposals
In terms of the number of policy proposals (meaning modifications, not extensions), the greatest number of changes has been proposed to the LIHTC program; there have been eight distinct proposed policy changes to LIHTC in the last 10 years. During the same period, five policy changes have been proposed for the ITC and/or PTC. Meanwhile, four policy changes have been suggested for the NMTC in the past 10 presidential budgets (although one was included as part of a larger Opportunity Zone tweak). A list of each year’s policy proposals for the past decade worth of presidential budget proposals can be found online at novogradac.wordpress.com.

Of the approximately 32 tax credit provisions related to the LIHTC, NMTC and ITC and/or PTC that have been called for in the past 10 proposed budgets, nine were eventually enacted. Of these, eight were extensions. The other provision that was proposed in a presidential budget and eventually enacted was the provision requiring LIHTC-financed housing to provide appropriate protections to victims of domestic violence. This provision was not included in an appropriations bill, but was included as part of the Violence Against Women Reauthorization Act of 2013.

Potential Proposals
Based on recent budget proposals and the administration’s position on various issues, it is possible the FY 2015 budget proposal will call for a number of familiar provisions.

Enhance the LIHTC
In recent years, the Obama administration has proposed several modifications to the LIHTC. In some cases, such as encouraging mixed-income occupancy, the same provision has been proposed in multiple years. As such, it’s possible we will see some previously proposed changes called for again in the FY 2015 budget.

Extend but Phase out PTC
In the past, the administration has generally expressed support for the ITC and PTC and previously called for extensions and expansions of both. But political pressure has grown to phase out the PTC, and as such, it’s possible the administration will ask for a short term extension based on an agreement to step the tax credit down over time.

Conclusion
Stay tuned for an update in an upcoming issue of the Novogradac Journal of Tax Credits. Once the FY 2015 budget proposal is available, we will examine what the administration recommends for tax credits and what those provisions could mean for affordable housing, community development, historic preservation and renewable energy development. In the meantime, as the tax credit community awaits the proposal’s release it’s important to note that in light of the intense focus in Congress on deficit reduction and related budget issues, any provisions in the president’s proposed budget will face an uphill battle to gain traction.

May 4, 2021: What CDEs and Qualified Businesses Should Be Doing Now to Prepare for the Next NMTC Application Round
Posted on May 4, 2021
April 27, 2021: Maximizing the Benefit of State and Local Tax Incentives and Exclusions for Renewable Energy Properties
Posted on April 27, 2021
April 20: 2021: Understanding Provisions of the Affordable Housing Credit Improvement Act of 2021
Posted on April 20, 2021
END_OF_DOCUMENT_TOKEN_TO_BE_REPLACED

HUD Publishes FY 2021 Income Limits; 65% of Counties Will See Increase
The Effects of COVID on NMTC Asset Management
Prepare for Success: Four Steps CDEs Should Take Now for the Next NMTC Application Round
END_OF_DOCUMENT_TOKEN_TO_BE_REPLACED